As we’ve established on numerous occasions, Japan approaches American-based junk food and beverages the same way Lennie approaches puppies in Of Mice and Men.  We’ve even let you know about the terrible, unspeakable things that Japan likes to do to our potato chips.  Of course, that’s just the beginning.  Japanese food sort of adheres to a subset of Rule 34.  By that we mean to say, we could type some random combination of disgusting words and it’ll exist in Japan, and be terrifying.  Don’t believe us?  Let’s see…uh, octopus soda.

…Oh dear God, what have we done?

So with that in mind, it’s time for us to take our periscope of terrifying food abominations towards Japan’s interpretation of the delicious Takis rival, Cheetos.  Which, as always, leads us to exclaim…

Cheetos are a classic Frito-Lay snack food/white-pants-ruiner that’s been on our shelves ever since Charles Elmer Doolin invented the cheesy puffed cornmeal snack back in 1948.  While they’re not the only delicious cheese puffs product on the market, they’re by far the best known.  Much like its sorta-cousin, the Dorito, Cheetos started off as a solely cheese flavored snack before America saw fit to spread its wings and try different flavors to various successes.  Of course, because this is America, the flavors tend to be either delicious or at least “moderately based in a realm of sanity.”  Flamin’ Hot Cheetos are objectively wonderful, about as addictive as crack, and honestly are the only non-standard Cheetos you’d expect to see in a gas station, but there have been limited-edition flavors in the past.  These flavors, however, wisely stayed at least close to cheese flavored.  Pizza puffs, salsa con queso, and cheddar jalapeno all make sense in Cheetos form.  Really the only “what were they thinking” moment came with 2012s Honey BBQ Cheetos, which also marked the last time the head of Frito-Lay’s R&D department listened to his stoner son’s flavor ideas.  Basically, what we’re getting at is that in America, Cheetos are a glorious, delicious, cheesy food and, oh God, we’re so scared to see what Japan has done to them.

Oh…Oh God.  This is so much worse than anything we could have ever even dreamed of.  It smells like flat cola, is coated in a cola powder, tastes lemony, and fizzles in your mouth before slowly draining your soul into a ceramic vessel entombed in the bottom of the Pacific Ocean where you will forever reside with thousands of anguished auras for the rest of time.  So, in a word, it’s pretty bad, which is exactly what you’d expect from a cornmeal snack artificially flavored like a sweet soda.  Since Frito-Lay is owned by Pepsi, we’d hazard a guess that some hopefully-now-fired executive in Japan’s office shrugged and said, “eh, people like crossover products, right?  Look at the Doritos Taco Loco.”

That logic immediately starts falling apart faster than a Jenga tower in the Michael J. Fox household when you realize that Taco Bell tacos and Doritos chips are, essentially, both foods, whereas Japan decided to take a fake cheese product and flavor it like a carbonated beverage.  By this logic, you could point out that Phillip Morris and Kraft Foods were part of the same company until 2007 as a way to justify making, say, Marlboro flavored Mac and Cheese.  Which sounds disgusting, right?  Yup.  About as disgusting as Pepsi-flavored Cheetos. 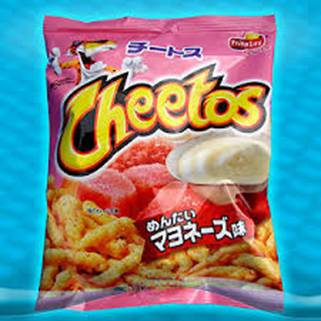 Ahhh.  Ahhhhhh.  Okay.  We’re gonna get through this together, readers.  So, a popular snack flavoring in Japan is Mentaiko and Mayonnaise.  That’s where they take Pollock fish eggs, mix it with some mayonnaise, and then let you call your kidnapped daughter to hear her voice for the first time in months as soon as you finish eating it.  And can you think of any better flavor for a Cheetos than that?  What’s that?  You can think of something better in a heartbeat, like, oh, fucking cheese?  Well, yeah, that’s a good point.  That’s a great point, actually.  Why are you making corn taste like fish and mayo, Japan?  Who hurt you so much to make you lash out like this?

Picture, if you will, a nice family dinner.  It’s not a holiday, but it is a special occasion.  Let’s say some old family friends are in town and you’re all sitting down in front of the nice China to have a meal together and just enjoy each other’s company.  You’ve eaten your Pollock egg and mayonnaise, just straight up chugged a Pepsi, and there’s a beautiful ear of corn resting on your plate.  You of course liberally douse it with butter, because you’re not some sort of goddamn peasant, and then pour on a healthy dose of soy sauce, because all of this was a sick hallucination playing out in your twisted mind right before the institution administers the next Electroshock Therapy treatment.

If you shift your thinking into the dark, twisted world of Japanese you can start to piece together the logic at play behind some of these flavors, but it’s a pretty murky world that leaves you feeling a lot like Will Graham in Hannibal.  Basically, as best we can tell, Japan grasped onto the fact that Cheetos are made out of cornmeal.  And when we eat corn, we like to cover that shit with butter and salt, because that’s delicious and we really want an ear of corn right now.  And because this is Japan and not a country of people with actually functional taste buds, they figured, “Hey, soy sauce is salty, right?  Same thing, lololol, now we’re off to make a soda that tastes like Curry, lololol vomit.”

And that’s the reason why every once and a while someone in Japan goes fucking crazy, drives into a crowd of people, and starts stabbing strangers left and right.

Cheetos are a simple food.  You don’t see a Cheeto and think, “Ye Gods, what is this mysterious manifestation.”  And you definitely don’t see bags of Cheetos that have to label various parts of a Cheeto as if you were looking at an overly complex blueprint of a security vault.  Now, we don’t know any Japanese (shocking, we know) but it does strike us as a little unsettling that the bag for strawberry-flavored Cheetos basically points to parts of the Cheeto as if they’re saying, “Okay, so we know this is unnatural, so let’s just take a moment to let you know what you’re seeing here.”  But that of course is not nearly as unsettling as the fact that Japan decided to take Cheetos and cover them in strawberry flavored yogurt, because Jesus Christ that sounds disgusting.  That’d almost be as bad as Chocolate Cheeto…oh no, we’ve done it again haven’t we? 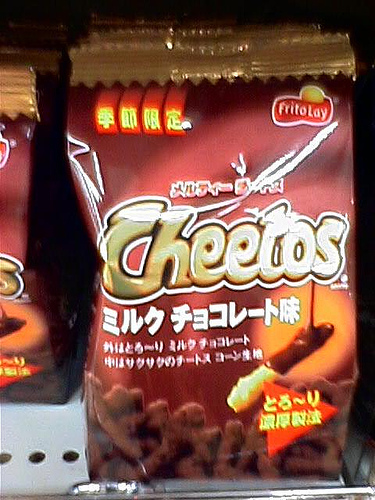 Okay we don’t like playing this game anymore.  We’re done, Japan.  Goddamn it.

One response to “Goddamn it Japan, You’re Doing it Wrong: Cheetos”