Babe Ruth Drinks and Smokes His Way Into the Record Books

“It’s simple kids, if you drink and smoke and eat and screw as much as me?  Well, kiddos, someday you’ll be just as good at sports!”

There’s something about baseball that resonates with America.  Maybe it’s memories of sitting at the ballpark, drinking a beer while scarfing down eight hot dogs after forging a sick note for your third grade teacher.  Maybe it’s memories of suspenseful chess matches between evenly matched teams, the thrill of finding your team in the bottom of the 9th inning with two outs and the bases loaded.  Maybe it’s your appreciation for the nuances of the “balk” rule.  It isn’t that last one.

But more importantly, the players that the sport grew up around were America incarnate.  Baseball was a sport where a you could take a man with the name “Mordecai,” chop off two of his fingers, and have him pitch for the Chicago Cubs, and not only would he thrive, he would win two world series and be a hall of famer despite looking like he should work behind the counter at a convenience store in the south.

This is the face of a man who has struck out 1,375 professional sports players.

But really, many of baseball’s greats helped express what was truly American about us.  Ted Williams was a patriotic war veteran whose interests included batting .400 and having his head cryogenically frozen.  Like America.  Rumor has it that Joe DiMaggio married the hottest woman in the world at the time primarily so he could say that he was “Dick cousins” with JFK.  Like every American would.  Ty Cobb was a horrible racist who once beat up a cripple.  Uh, forget that we mentioned that last one.

But what ballplayer was more patriotic than both a deformed Indiana pitcher and a Georgian bigot combined?  How about an overeating, alcoholic fat man with a sex problem and a tobacco addiction.  No, we’re not talking about the gay love child of Uncle Sam and George Washington, we are of course talking about…

To set the stage, here’s an actual quotation by the Big Bambino.

“Sometimes when I reflect on all the beer I drink, I feel ashamed. Then I look into the glass and think about the workers in the brewery and all of their hopes and dreams. If I didn’t drink this beer, they might be out of work and their dreams would be shattered. I think, ‘It is better to drink this beer and let their dreams come true than be selfish and worry about my liver.’”

Are you fucking kidding us?  Why is that not on the goddamn dollar bill?  No one understands Latin anyway, this should be America’s fucking motto.

George Herman Ruth, Jr. was born in 1895 because nothing particularly interesting had happened that year yet.  As a “troublemaking kid” Ruth first broke into his father’s whisky cabinet when he was 5 (seriously).  Some say that this is what gave him his prodigal baseball abilities, while others think that this is the reason why his father sent him to an orphanage, where Ruth would eventually be taught the game of baseball.  The latter group also agrees that whisky gave Babe Ruth his prodigal baseball abilities, though.

Ruth was taken in and signed by the owner of the Minor League team the Baltimore Orioles (not much has changed since), Jack Dunn.  Some believe that due to his proximity to the owner, Ruth was called “Babe,” which at the time was a fairly common moniker.  A much more awesome theory, however, was that Babe was an acronym for Ruth’s patented offseason training regimen, which was “Beer, Alcohol, Booze, in Excess.”

Babe Ruth spent the first six years of his career as a pitcher, which is sort of like Chuck Liddell starting his first six professional seasons as a baker, only if Chuck Liddell could make the best cake you’ve ever tasted in your life.  Babe Ruth spending six years as a pitcher would be the same as Ron Jeremy being discovered, but spending his six years as an incredibly effective coat rack.  Babe Ruth waiting six years before becoming a full time hitter is like Brett Favre waiting twenty years to give the American public a reason to make fun of his genitals.  We all feel robbed of the time we lost.

After a brief major league appearance in 1914, a then-minor-league pitcher Ruth proposed to, and then married, his first wife, Helen Woodford, a waitress he met at a Boston restaurant.  As he was making his vows to be faithful to his wife, the minister started cracking up and said, “You’re fucking with us, right George?”

Despite all that, Babe Ruth managed to have a record of 94-46, with an ERA of 2.28 in his career, which means that he’s still got better numbers than 2-time Cy Young winner Tim Lincecum (56-27, 3.04).  The only difference is, by the end of Ruth’s pitching career, after winning three World Series for the Boston Red Socks, he was hitting more frequently than he was pitching, and set the then-major-league record of 29 home runs in 130 games, 17 of which he was the pitcher.

Ruth was at this point a bonafide star, having the previous year led the league in home runs while batting .300, despite not being an everyday player, playing in only 95 total games, and having far less at bats than the rest of the league’s position players.  To put this in perspective, that would be like casting Christian Bale as the wacky neighbor in Garfield 3:  Oh God, What Have We Done? And having him still win the Oscar for Best Supporting Actor.  Babe Ruth’s blood was filled with so much alcohol and tobacco that the only way he was able to circulate oxygen through his circulatory system was by hitting dingers.

Babe Ruth began the next phase of his career as a pioneer for professional athletes for years to come- he demanded such a large pay increase (twice his previous salary) that the Red Sox were forced to sell him to the New York Yankees for $100,000.  New York, at the time, had never won a World Series, but Ruth, saying, “I don’t give a shit, show me some dames,” was wowed by the city’s vibrant nightlife, readily available alcohol, and incredibly loose women.  Due to the sheer amount of women Babe Ruth slept with during his playing days, and the fact that Baseball is a sport that involves traveling to other cities throughout the year, at least one person reading this has a female relative, be it a grandmother, great-grandmother, or great-aunt of some sort, that just absolutely got pounded by the Sulton of Swat.  Enjoy that mental image. 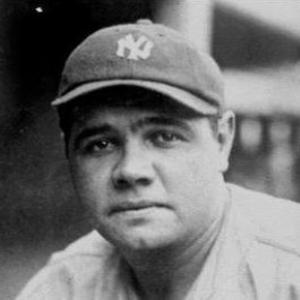 In news that made everyone go, “ohh, seriously, how?” in a really fake voice conveying absolutely no surprise, Ruth’s wife separated from him in 1926.  When he married his second wife in 1929, who eventually became her business manager, their marriage had the oft-overlooked “It’s not cheating on you if I let you watch” clause, which helped Ruth continue his sexing, overeating, overdrinking, oversmoking ways which were necessary to fully hone his skills.

By the end of his career, Ruth had set records in OBP, Slugging Percentage, Home Runs, Wins Above Replacement, On Base Percentage, Walks, Farm Girls Deflowered, Cigars Smoked, Runs Batted In, Hot Dogs Consumed, Liters of Whisky Consumed, and 4th in Fistfights Started.  To date, Babe Ruth remains an icon, a testament to the power of the American Spirit, and also someone who you probably didn’t want to introduce your girlfriend to.  Just like America.