A Road Trip of Roadside Attractions Through America’s Midwest: Part 1

~Those fucking kids.  I swear to God, I will drive this van into a ravine.

America is a land of roads.  More than any other nation, the highways and interstates of this great land speak of a legacy.  You can drive to any state you want, assuming you had enough time, gas money, and activated charcoal to fool the breathalyzers.   Except for Hawaii, but Hawaii the 51st most American state in the World.  Guam is ahead of it, and Guam isn’t even a goddamn state.

But if it is the roads of America that serve as this nation’s heart, roadside attractions serve as our soul.  America can take something like twine, try to make the world’s biggest ball of it, and center it as the primary reason for people to visit their town.  And people will stop and see that big ass ball of twine because hey, that’s sorta cool, besides, we all need a piss stop anyway.  Hell, this is a country that not only has a “world’s largest cherry pie tin,” they have a contending giant pie tin forty-five minutes away.

No other place in the world comes close to the glory of a roadside attraction during a lengthy road trip.  In Europe, you have to deal with Smart Cars getting all up on your grill.  In South America, the closest thing they have to a “Roadside attraction” is the fact that they carve murder roads into cliffs as a way to battle population growth. 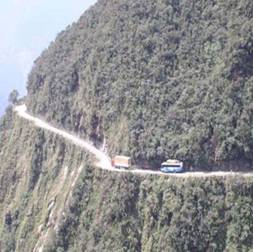 America’s Midwest is often known as “America’s Heartland,” and Indiana even admits in its state motto of “The Crossroads of America” that “You basically go through our state to get where you want to go.”  For this reason, today’s America Fun Fact of the Day will be about…

Landmark Attractions of the American Midwest (or, like, 3 states)

Our trip will start in Austinburg, Ohio.  An unincorporated town with a post office, Austinburg sits on the  North Eastern edge of Ohio, near Lake Erie.  They also have fucking this.

Holy shit, pull over, pull over, I think we just saw a rocking chair that’s bigger than a fucking house.  I said pull the fuck over! Good, awesome.  We’ve heard stories that rural Ohio living does something to the brain, but if this is what it does to them we say keep going.  Watching someone try to sit on this chair would be like watching a Chihuahua try to fuck a hippo.

After we left Austinburg, we headed towards Akron (LEBRON BITCHES!), but on the way we hit Mesopotamia, Ohio, where we found…

The world’s largest Amish Horse and Buggy! This is what it would look like if the Trojans ever warred with Mennonites.  We’re pretty sure that this wasn’t even made by the Amish, we bet some teenage city kids who happened to be good at Carpentry just made this so they could fill it with electronics, roll it over to an Amish town, and listen to the shrill shrieks of terror and “IT IS THE DEVIL!  IT IS THE DEVIL” from the Amish people that first go inside it.  Actually that sounds awesome, AFFotD needs to hire some carpenters and find a guy with an employee discount for Circuit City.

Continuing along, we hit up Indiana, and more specifically, to Franklin, Indiana, in the very heart of the crossroads of America.  In Franklin, the proud American tradition of normally-not-giant-things-that-are-now-giant-for-no-reason remains good and well.

“Oh that’s lame,” you all shout.  “You’ve seen one giant rocking chair, you’ve seen them all.”  To which, we would say, look elsewhere in Franklin, Indiana, where we can tell you…

GIANT CHEST OF DRAWERS MOTHERFUCK!  Seriously, of all the things that you could decide to make into a “The World’s Largest,” how low would “Chest of Drawers” rank on your list?  For most AFFotD writers, here’s our list of “things we will make wooden ‘World’s Largest’ of to promote tourism to our small towns.”

And even farther down..

Get your shit together, Indiana.  Moving from there, we took a bit of a detour so we could travel the full length of Illinois, from Cairo to Chicago.  Illinois is chalk full of crazy giant shit.  God knows why.  Maybe the rest of the state is overcompensating for their whole “We’re Not Chicago” complex.  Let’s start with…fucking PEOPLE.

You might be thinking, “So what, it’s a statue.  Doesn’t even seem like that large of a statue.  That’s what, nine feet tall?  That’s nothing.”  Yeah, well that’s Robert Wadlow.  He’s from Alton, Illinois, and there’s a picture of him on Wikipedia.  Here’s what Robert Wadlow looked like.

MOTHERFUCK WAS NINE FEET TALL! That’s his dad next to him, who was 5 foot 11!  This giant thing was called the Alton Giant, and he was just over 8 feet 11 inches when he died at the age of 22, and he had showed no signs of slowing down.  Apparently he had a hypertrophy of his pituitary gland, which gave him crazy amounts of Human Growth Hormone.  Think “Anti-Gary-Coleman.”  And Alton, Illinois is ALL ABOUT THAT SHIT!  They’re so proud that this guy who basically had a genetic disorder happened to be born in their town!  That’s like giving a national day of thanks to Andy Garcia for being born with a partial Siamese Twin!  Fuckin’ A!  Jesus, Illinois, what else you got that’s unnecessarily giant?

BOOM, World’s Largest Abraham Lincoln Statue (that kind of looks like it’s flicking you off).  That’s what I’m TALKING ABOUT Charleston, Illinois!  It’s not even that good quality, which is the best part about it.  They didn’t say “We want to make a great, respectful, Lincoln-Memorial type statue” they just said flat out, “How big can we make this fucker?”  This looks like it belongs next to a giant Paul Bunyan and Babe the Blue Ox at a Midwestern Mini-golf venue.  This is so ostentatiously American, we just set off a series of fireworks inside of a French Bistro.  What’s the ultimate sign of the incredible amount of “Fuck it” that went into building this giant testament to America?  This is located right by it. 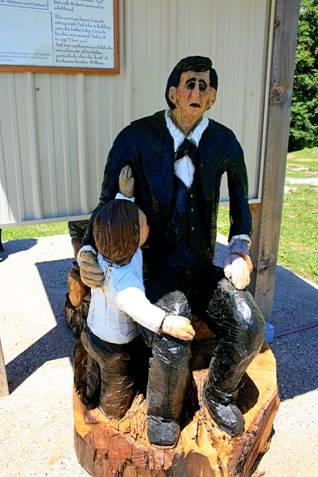 For those of you wondering “What would Abraham Lincoln look like if he caught a bad case of leprosy and kidnapped children like a goddamn Pied Piper,” here is your answer.  What else you got, Illinois?

YES!  YES!  YOU’RE GODDAMN RIGHT, ATLANTA, ILLINOIS!  What do people like?  A Giant Muffler Man.  What should a Giant Muffler Man be holding?  Mufflers?  Fuck you!  HOT DOGS!  The logic that led to this being created cannot be replicated.  Pretty much, it was some city planner meeting with a sculptor, and this was their conversation.

City Planner:  Hi there, Mark, really big fan of your work, especially your additions to that giant Lincoln statue that doesn’t give a shit.

City Planner:  If there was a number LESS than zero, that’s how many shits Lincoln gave.

Sculptor:  That’s what I tried to tell my 7th grade math teacher!

City Planner:  So, what were you thinking for our statue here in great Atlanta, Illinios?

Okay, what else we got? 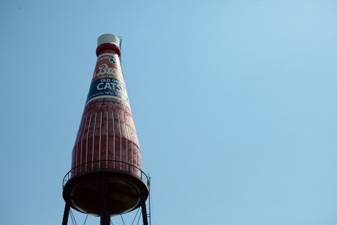 The WORLD’S LARGEST CATSUP BOTTLE!?  Not even ketchup! ? Haha, we don’t know what they put in the water in Collinsville, Illinois, but from now on that’s the only shit we’re using to cut our whisky.  But what are you going to use that Catsup on?

HA!  YES!  East Peoria, you’re right!  Fuck it, just put catsup on a chicken.  What, a chicken’s not American enough for you?  THEN GIVE IT A FUCKING COWBOY HAT!  That’s crazy, but not quite crazy enough.  How about, what if a town decided to make a monument about the Agricultural crash of 1980.  You know, like a wall street crash, but with agriculture.  What would that monument look like?

Did you guess the opening fucking scene from Lost?  Holy shit, we could live in this state,  nothing is more American than heavy handed metaphors and a flimsy grip on reality.

And finally, in Illinois, clearly this land is full of monsters and giants.  So, what would happen if an evil version of Jesus was reincarnated to this Earth, and he were fucking giant? How could we ever stop a GIANT EVIL JESUS?

World’s Largest Cross.  Of course.  It was starring us in the face the whole time.  Well done, Effingham.  Well done, Illinois.  Well done….America.

Well those AFFotD fellers sure got themselves in an American pickle.  They got a taste of the country and they ain’t gonna stop till they sample the whole damn thing.  Feel free to jump ahead to see the second part of this American Road Trip.

6 responses to “A Road Trip of Roadside Attractions Through America’s Midwest: Part 1”