A Road Trip of Roadside Attractions Through America’s Midwest: Part 1

~Those fucking kids.  I swear to God, I will drive this van into a ravine. 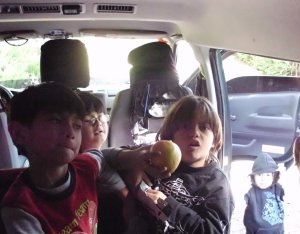 America is a land of roads.  More than any other nation, the highways and interstates of this great land speak of a legacy.  You can drive to any state you want, assuming you had enough time, gas money, and activated charcoal to fool the breathalyzers.   Except for Hawaii, but Hawaii the 51st most American state in the World.  Guam is ahead of it, and Guam isn’t even a goddamn state.

But if it is the roads of America that serve as this nation’s heart, roadside attractions serve as our soul.  America can take something like twine, try to make the world’s biggest ball of it, and center it as the primary reason for people to visit their town.  And people will stop and see that big ass ball of twine because hey, that’s sorta cool, besides, we all need a piss stop anyway.  Hell, this is a country that not only has a “world’s largest cherry pie tin,” they have a contending giant pie tin forty-five minutes away.

No other place in the world comes close to the glory of a roadside attraction during a lengthy road trip.  In Europe, you have to deal with Smart Cars getting all up on your grill.  In South America, the closest thing they have to a “Roadside attraction” is the fact that they carve murder roads into cliffs as a way to battle population growth.

America’s Midwest is often known as “America’s Heartland,” and Indiana even admits in its state motto of “The Crossroads of America” that “You basically go through our state to get where you want to go.”  For this reason, today’s America Fun Fact of the Day will be about…

Landmark Attractions of the American Midwest (or, like, 3 states)