A Road Trip of Roadside Attractions Through America’s Midwest: Part 2

~GODDAMN IT KIDS THIS IS WHY YOUR MOTHER LEFT

AFFotD took you on a magical journey through America’s Heartland in the first leg of our Road Trip through Roadside Attractions.  We saw a whole slew of things that America decided to make giant for little or no discernable reason, and after checking in on our Chicago offices for a chance to make fun of Vince Vaughn for doing that shit film, The Dilemma, we decided we should continue to see what this fine nation has lying ahead of us.  But the last thing we wanted was to be driving sober, and cheese curds sounded pretty fucking delicious, so we headed north to the home state of the Super Bowl Exellvee champions, Wisconsin. 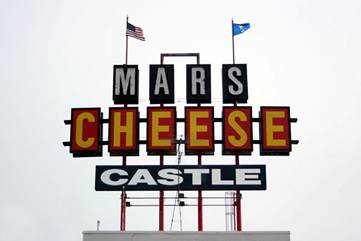 Wait, what’s that?  A…a cheese…castle? A…A castle?  Of Cheese?  We’re just North of Illinois, and this might be the most glorious thing we’ve ever seen.  Does the rest of it look like a castle?  No!  But it’s still a cheese castle!  Why?  Fuck you, that’s why!  And they sell beer too?  Holy shit, we think we might fall in love with this state.  After fueling up, and getting nice and soused on some New Glarus, we kept going onwards.  Sure, a place called the “Cheese castle” filled to the brim with beer and cheese is pretty Wisconsin and, hell, pretty American.  But we’ve not seen anything unnecessarily strange or giant yet.

Ha ha, what the fuck?  We got “Bessie the Cow” here in Janesville, WI, just north of Rockford, Illinois.  There are so many questions at play.  First of all, this looks like it’s plopped right in the middle of some goddamn farm.   We can’t even comprehend the logic behind this.  The decision to make a cow as tall as power lines usually has something…justifying it.  Instead, we have this Field of Dreams like scenario where some farmer was tending his seeds or whatever the fuck it is that farmers do (other than constantly bragging about being the “Backbone of America.”  Yeah, we get it farmers, good for you, we don’t care) when a booming voice just goes, “Build a giant fucking cow,” and the farmer looks around like, “Is that Shoeless Joe Jackson?”  Only in this scenario, instead of Shoeless Joe Jackson helping Kevin Costner play that one game of catch with his father he never got to…sorry… one second… damn allergies… but instead of that, the farmer built a giant cow so we could pull over and chuck our empties at it.

We’re pretty sure this is how Bessie the Cow came to be.

*Dramatic music plays, a farmer who looks suspiciously like Kevin Costner if he had gone through life avoiding making “Waterworld” looks out at his farm, needing to pay the bills*

Kevin Costner: Who is that?  Dad?  Is that you?

Voice: Uh…sure.  Also, uh, before you build the cow, your father demands that you buy a 30 pack of beer and give it to the underage kids with a megaphone behind your house.

Kevin Costner: Anything for you dad.  Anything.

But, it’s not like there’s some other totally unrelated giant version of the same basic thing like, fifty miles north, right? 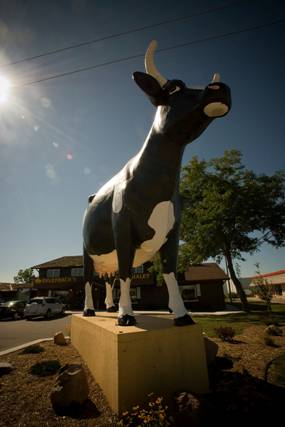 SON OF A BITCH!  Bessie’s got a sister!  And her name is…Sissy the Cow?  Apparently this is for a different cheese store in DeForest, Wisconsin, because if it’s a store and it’s in central Wisconsin, you’re either buying booze, cheese, or Packers paraphernalia.  So that’s not too absurd, at least.  Granted, unnecessary giant cows with strange names are sort of like fecal pornography- unless you’re really into that sort of thing, you see one once and you pretty much don’t care if you see another one again.  At least this one doesn’t have the, “Drunk Teenagers tricked a farmer” vibe like Bessie did.  Well, let’s start thinking about heading out of DeForest to somewhere else and…

Are you shitting us, DeForest, Wisconsin!?  When we decided to drive through Wisconsin, we were expecting the giant cows.  Hell, if we didn’t find a giant cow, or a three story tall wheel of cheese, we’d have been disappointed in the state.  We were ready to just make fun of Wisconsin nonstop if they didn’t have that kind of shit.  Cheese castles?  America.  Giant cows?  Wisconsin, America.  The fuck is this?  Who the hell in Central Wisconsin decided to spend their time and effort making a giant, pink elephant and give it Emo glasses?  This looks like it should be the rejected album cover for the most recent Weezer album.  Okay, let’s get out of here, whenever we see giant pink elephants doing a Buddy Holly impression, we usually just assume we’re on a bad acid trip.  We need to go somewhere safe, so we’re going to start heading west.  We’ll just make a stop at Sumpter, Wisconsin.  Wait, what’s this?  Dr. Evermor’s Forevertron?  What’s that? 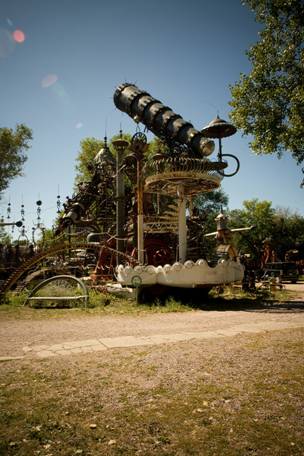 OH MOTHER OF GOD WHAT IS THAT? 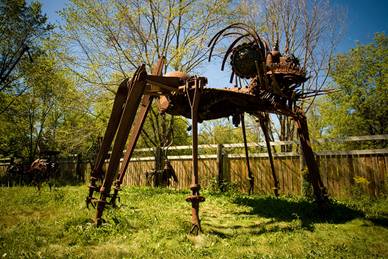 OUR BULLETS ARE USELESS!  IT ONLY MAKES THEM STRONGER!

What the SHIT was that!?  No, no, shut up, don’t tell us, “Oh, well we read the Wikipedia page that you linked at the beginning of this section, it’s apparently the world’s largest scrap metal structure,” NO, we’re not believing any of that shit.  We just saw Satan’s Robot, and it tried to kill us, that’s our story and we’re sticking to it.  Holy fuck.  Either Wisconsin beer is a lot stronger than we thought, or Wisconsin’s hallucinogenic drug scene is a lot more entrenched than we could have possibly imagined.  Let’s just keep going, let’s try to get to Minnesota or something.  We’ll just make a quick stop by Sparta, Wisconsin on the way, before we get the hell… 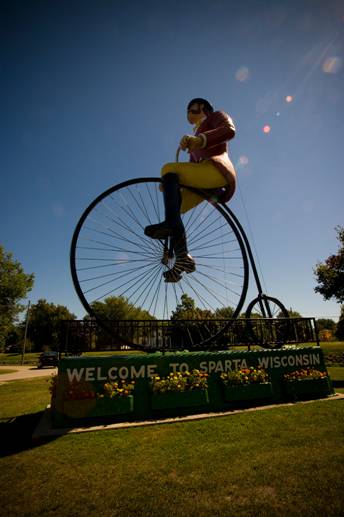 Okay, what the FUCK Wisconsin!?  Was your state designed by Louis Fucking Carroll?  We’ve had a giant pink elephant, the evil mechanical spider from Wild Wild West and now a giant mustached gentleman riding a giant old-timey bicycle.  Our brains hurt.  Ever since we saw Inception each staff member carries a totem, and all of them are the Leo DiCaprio spinning tops, and seriously, we all just took them out, spun them, and started screaming, “NO!  WHY DID IT FALL?  IT MAKES NO SENSE!  THIS CAN’T POSSIBLY BE REAL!”  We’re gonna hightail it out of this trippy state, God we need something to help ground us.  Anything at all that’s giant, American, and in no way totally fucked up. 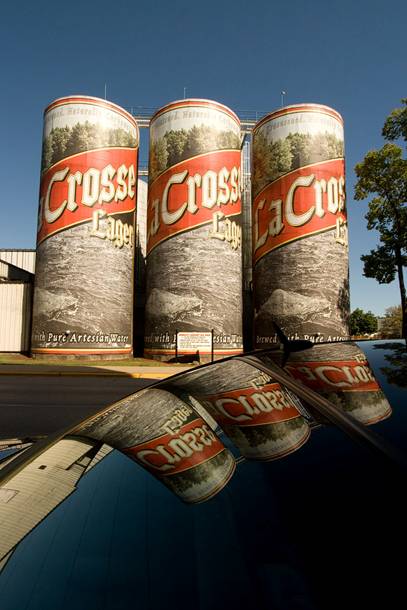 Wait, stop!  Stop the car!  We…we see something beautiful.  Oh Wisconsin, you’ve redeemed yourself, are those the world’s largest beer cans!? Oh, fuck yes!  Oh, oh God, we’re so happy right now.  That’s…it’s just so…beer.  Giant beer.  LaCrosse, Wisconsin, you’re champions in our books.  We’ve just got a warm fuzzy feeling right now.  We tried to cut a hole in beer silos to shotgun the sweet sweet gallons within, but apparently there is a small security detail that doesn’t particularly take kindly to a bunch of grown men hacking away at giant beer cans with an arc welder like we’re trying to get into a goddamned bank vault, so we just stopped at the nearest liquor store (ha, who are we kidding, every store will sell us booze here) and chugged some six-packs before hitting the road to Minnesota.  Giant Beer is pretty American, can Blue Earth, Minnesota even try to match LaCrosse?  We mean, come on, their name is Blue Earth how American can that be?

HA!  Yes, being a shill to an American corporation for tourism is incredibly American!  Well done Blue Earth!  This statue apparently cost $43,000 to make, which is actually cheaper than you would have expected, right?  Granted, this isn’t a work of art or anything, but fucker is big, you’d imagine it would run you more than a mildly souped-up Chevy Volt, right?  Either way, kudos.  Apparently 10,000 people a year flock to see this statue.  We’re honestly not sure if we should be impressed at that number, or depressed that so many people go out of their way to stop by here.  Well, if you’re feeling remorseful for worshiping a Corporate mascot, and you’re a midget, at least Minnesota’s got the perfect place for you to repent.

TINY CHURCH!  Holy shit, Luvurne, Minnesota, it looks like you put a cross on top of an outhouse, threw your hands up, and said, “Christ is king!”  If Megachurches are super creepy and corrupt (they are), then wouldn’t a tiny church be incredibly endearing and honest?  (Yes, yes it is)  Oh, Minnesota, why can’t we quit you?

Well, between the Wisconsin beer buzz, and the ridiculous combination of the Green Giant and the Tiny Church, we’re feeling pretty good.  We’re gonna take a quick detour through Iowa before going to South Dakota to end this leg of our trip visiting some of our pals at Mount Rushmore.  It’ll be really good to see Teddy again.  So, apparently, Avoca, Iowa has some road side attraction that people like to talk abou…

IT’S HEADING THIS WAY!  IT’S COMING RIGHT TOWARDS US!  CAN’T THIS THING GO ANY FASTER!?  WHAT’S THE POINT IN HAVING ROBBIE KNIEVEL AS OUR DRIVER IF WE CAN’T OUTRUN THIS GIANT SPIDER OF MURDER OH GOD OH JESUS! 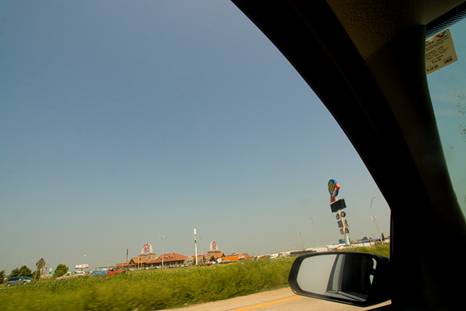 Oh thank god.  No, we don’t care if that’s the world’s largest truck stop out the window right now, we’re getting the fuck out of this state.  Goddamn it Iowa, and you wonder why you don’t have any professional sports teams.  This is why.  The hell is wrong with you people!?

Okay, okay, we’re in South Dakota.  Thank God.  Let’s just take a quick stop in Sioux Falls, South Dakota, since, well, what kind of road trip would this be without…

YES!  A KARATE MUFFLER MAN!  HI-YAH!  Ohhh, that makes us feel warmer than the cases of Wisconsin beers we’ve been chugging after each county line we pass.  What…is there a reason why the arms are like that?  The Mr. Bendo Muffler Man is who this is, and he looks like Sean Connery being cast as the Western villain in a goddamn Bruce Lee movie.

Oh yeah, absolutely.  Just replace that piece of metal in his hand with nunchucks, and he can just take Kareem Abdul-Jabbar’s role in The Game of Death. 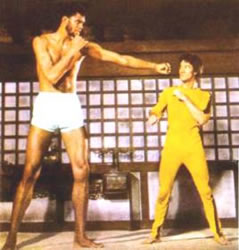 Yes.  Yes, this needs to happen.  But, with our beer supplies dwindling (we saved about fifteen cases for the boys at Rushmore.  Sorry, for the boys in Rushmore).  But after a few…tense encounters with the South Dakota State Police, we made it.  America’s first randomly giant Roadside Attraction.

There they are.  Watching over this fine land.  Waiting for when we really need them.  At which point they’ll bust the hell out of their stone prison, and lay down some good old American asskickings.  But until that day comes, this one’s for you, fellas. 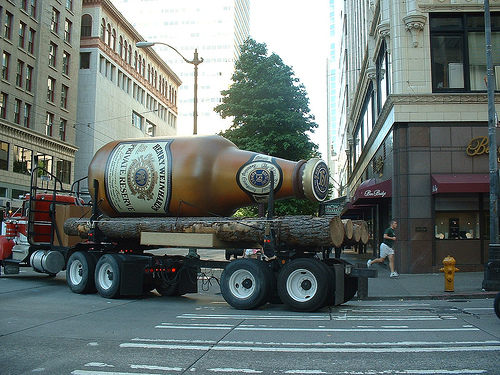 6 responses to “A Road Trip of Roadside Attractions Through America’s Midwest: Part 2”