“Liquefy all our assets NOW!  Shit, shit, wait, no I don’t mean MELT them, I mean…forget it, I’ll do it myself.” 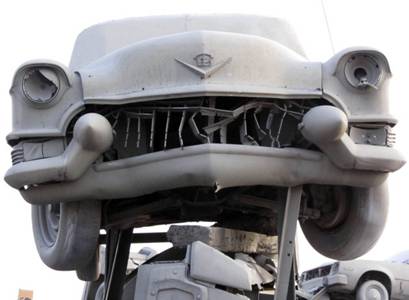 If we’ve learned anything from those Chrysler commercials with Eminem, it’s that cars are, uh, important to America?  Something about Detroit?  Robed opera singers?  Anyway, the automobile industry helped America experience both one of its greatest financial booms (what up, Henry Ford) and the stubbornness of our automobile industry helped America experience one of its greatest financial recessions (what up, Henry Ford).

Yes, America loves cars, and many of our finest moments have centered on road trips through the vast empty areas of our fair nation.  And it was during one of our more recent road trips that we encountered a beautiful, if…confusing place in Nebraska called…Carhendge.

If you walk within 15 feet of this, the trunk of your car magically fills with Four Lokos.

And we assumed that would be the end of it- we’d take a few pictures, maybe upgrade our trailer to a double-wide, and leave with the satisfaction of knowing that we had seen a giant Stonehenge replica.  Anytime we got into an argument with someone saying, “That’s not proper grammar” or “Sir, you’re clearly drunk” followed by “Sir, if you do not leave the bouncy castle we will have to call the police” we can at least take smug satisfaction in the knowledge that at least we’ve been to Carhendge, and besides, what kind of asshole pays for a bouncy castle at a block party and doesn’t let their neighbors use it?

But everything’s changed now.  Carhendge is for sale.   For just $300,000 dollars we can buy Carhendge and then have our smile slowly fade as we realize that we don’t know how to move the damn thing.

We don’t have that much money just lying around, as evident by our desperate and ill-advised sponsorship deal with Wendy’s, but we do have you, the loyal readers.  So give us some fucking money, already.

Welcome to the first ever AFFotD Pledge Drive, where we ask you, the casual reader in a poor economy, to give us money for no other reason than to satisfy our desire to spend more money than you make in 5 years to buy something that is useless to those that don’t realize how fucking awesome a Stonehenge made out of cars is.

You might be thinking, “Why does AFFotD deserve $300,000 dollars to buy a bunch of fake cares stacked up to look like holy crap I understand why they want it now, I had to say it out loud first, but I totally get it” at this point, and we don’t blame you.  You worked hard for your money, and $300,000 can buy hundreds of bottles of liquor or even a really good bottle of scotch.  But, we feel we need to point out, yet again…

Here is a list of items you can spend $300,000 on, and the reason why you’re better off giving us that money so we can buy Carhendge.

Yes, this might seem tempting.  You’ve got that settlement from getting hit by that Greyhound bus burning a hole in your pocket, and we mean that literally as the highway underpass you’ve been living under has started seeping this strange soapy feeling liquid, and even though you don’t know what it is, it sizzles on your skin when you touch it, so that can’t be good.  So of course you could see yourself spending $300,000 to get yourself a roof over your head.  You’ll be able to do things like “shower” and “sleep on a bed” and “not be surrounded by dozens of masturbating vagrants.”  That all does sound tempting, plus the look on the face of the real estate agent when you pay for the house in cash and imply it’s for illicit tax purposes would be pretty hilarious.

But, come on.  Carhendge.  Could you imagine the look on our faces when we open our mail to see enough money to buy our very own Carhendge?  We’d be more excited than a kid in 1996 scoring an N64.  “CARHENDGE!  OH MY GODDDDD!”  Plus, if you’re really that hard up for a place to stay?  We’ll let you sleep underneath the cars.  For a couple of nights at least.

After all these years, all that scrimping and saving, and all those medical experiments, you’ve finally set aside a nice $300,000 nest egg to go after your lifelong goal- to reenact the film Leaving Las Vegas scene-for-scene.  Elizabeth Shue isn’t really doing that much and you’d still love to see her topless on a pool.  We get that.  And of course, most of your budget will involve the obscene amounts of booze you’re going to need to purchase.  We can’t fault you with this one.  $300,000, when partitioned correctly, can buy you roughly one million drunks.  That’s enough to last most Americans at least two years.  So while this is a much better excuse than the house excuse, it still shouldn’t stop you from instead donating that money to us to let us buy Carhenge.  You can always buy booze, God knows how long something as totally awesome as Carhenge will stay on the market.  Remember, rich people like to spend money on incredibly stupid shit.  This is a one in a lifetime opportunity!  For you!  To help us reach this goal!  If you don’t pay up we’ll find out where you live and torch the fucking place.  We’re really drunk right now!

Well, just pretend that you didn’t read that last option, and make a check out to Johnny Roosevelt, care of AFFotD, and we’ll invite you to visit and everything.  Carhenge!  We can do this, America!