“Goddamn it, no, we’re not putting the Puppy Bowl on the other television, stop asking.”

Over the years, the Super Bowl has gone from a half-assed sporting event where shit like “a team has to re-do their kickoff because the cameras missed it” happened to national event of such great importance that not even an appearance by the Black Eyed Peas can stop people from tuning in.  The Super Bowl is an American holiday, Monday hangovers be damned.

Yes, the Super Bowl is like New Year’s Eve’s older, cooler brother that smokes cloves out in the high school parking lot.  New Year’s Eve carries impossible expectations, expensive drink specials, and a surprising lack of giant men concussing each other.  The Super Bowl takes all the best parts of New Years (booze, shitload of parties), throws in a lot more unhealthy food (can we get a what what for 7-layered bean dip?), and centers it around a football game that is so brilliantly produced that even people who hate sports will come to your party to “watch commercials” (which is code word for “get drunk and get hit on by your roommate’s friends”).

Now, because this day is so important in setting the tone for the month of February, and the year as a whole, it is your personal duty as the American with the largest HD TV among your friends to host a viewing party so grand that it would cause a Frenchman to shame-spiral into watching Sofia Coppola’s Marie Antoinette on repeat while sobbing into a bottle of anti-freeze.  And that’s where we are here to help, by presenting you with… 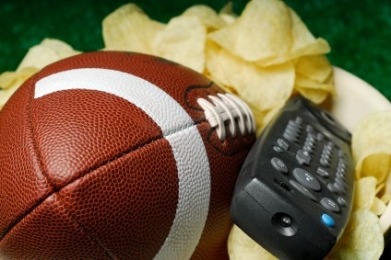 So, it’s 9 AM on Super Bowl Sunday, which means that if you turn on your TV now you can just catch the beginning of hour 5 of the pregame coverage.  You got a six pack of beer and a back of plain potato chips and you’re excited for people to start showing up to your party.

Tough shit, asshole, that’s all you’ve got?  This is the super bowl, and all you’re bringing to the coffee table is a sixer and a 2 dollar bag of chips?  The fuck is wrong with you?  We’re not watching the Rams play the Jaguars here, this is the Super Bowl.  This is why you don’t have any friends, and you don’t, trust us, don’t let the fact that one other person accepted your facebook RSVP- that was a pity accept and they’re already at a better party.

It’s just like your 6th birthday party, only at least your mom remembered to buy pizza for that.

This of course is one of the most common problems a Super Bowl party planner can run into- the “pot luck” assumption.  A good Super Bowl party is a lot like a cash register.  Yes, people will put things in there, but if you don’t have change for a twenty, you’re going to be running out of business pretty quickly.

Listen, people are going to be bringing things to your Super Bowl party, unless they’re a dick.  But you gotta give them a reason to show up with things in the first place.  For those of you who said, “ruffled potato chips!?” hi, we guess you’ve never been to this site before, please leave if you’re a teetotaler or a vegetarian.  The rest of you no doubt shouted, “You need enough booze to drown all of Bavaria,” which of course you do.

At least this much.  At LEAST.

Yes, other people will bring six packs of beer, but it’ll be better beer.  We didn’t say go crazy, a shitload of cheap beer is still a shitload of beer.  Once you’ve gotten that situation taken care of (and if you really want to up your game, get some hard alcohol for those of your friends who will want to do shots.  Fair warning, all of your friends will want to do shots) you need to figure out how much is the appropriate minimum amount of food.

Eh, we mean, that looks good, but only for ONE person.  Might need to cater a few dozen of those bad boys.

You need to prepare at least one main course item.  Not everyone will eat it- some people will prefer to pillage snacks- but people will be pissed if it’s not available.  So for those of you with extra time on your hands, spend a few days soaking some bratwurst in beer if you really want to man up and do your party America-styled.  Of course not everyone is that adventurous, so really you’ll totally be allowed with a large bucket of buffalo wings, or a few pizzas.  Chili is also acceptable.  While these will be important parts of your Super Bowl, you also will need to have snacks.

Yes, snacks is your lifeblood.  You will need at least two separate dips, though ideally you want the big 3 of salsa, guacamole, and bean dip.  If you are having regular potato chips in addition to tortilla chips, then you need an onion dip.  Onion dip is less important if you only went with the flavored chips and pretzels route.  But no matter what, you will want a variety of potato chip flavors. 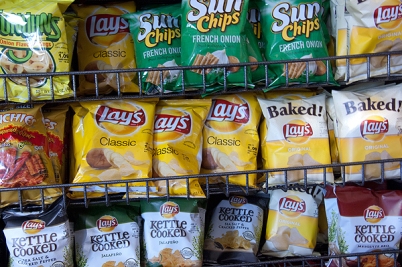 All of them.  ALL of them.  EMPTY THE SHELF YOU GLORIOUS BASTARD!

Once you’ve gotten all this taken care of, your Super Bowl party should be just fine.  Just keep the TV on the game, amp up the volume (even for the commercials) and encourage people to show up early and start getting hammered.  Remember, if you’re not drunkenly screaming “KILL HIM!” at the TV during a random kickoff, you’re not doing the Super Bowl right.

Now, get to the grocery store, Americans.  You’ve got some booze to buy.

One response to “AFFotD’s Guide To American Super Bowl Parties”