A Road Trip of Roadside Attractions Through America’s Midwest: Part 3

“Daddy, mom said that we’re supposed to call the police if you start drinking behind the wheel again.”

~How many times does daddy have to tell you kids to shut the hell up?

America is a glorious, sprawling land, with a lot of weird shit out there.  As we’ve established in our first and second road trips through Midwestern America, the best part of driving through America is being able to stop and waste time at a whole variety of strange, exotic places.  Except for that spider-car.  That was terrifying as all shit.

After our last trip, which ended with several AFFotD staffers getting wasted at Mount Rushmore, we don’t really know what happened.  When we eventually woke up, we all were missing one shoe, one sock, and the sleeves of our shirts had been cut off.  Oh, also, our car was scattered around us in dozens of pieces.  Or so we thought.  Actually, our car was nowhere to be found.  Turns out we’re in Alliance, Nebraska, where we were greeted with this sight.

Is…is this what we hope it is?  Did someone take a shitload of cars and use them to construct a replica of Stonehenge?  Oh sweet Jesus, that’s amazing.  Please please tell us that is has a painfully lame pun as a name.  It does!?  CARHENGE?  That’s absolutely brilliant.  That is the most beautiful thing we have ever seen, except for those forty foot tall beers in Wisconsin.

God, this has put us in such a great mood.  We don’t even have a car to use (we tried to see if we could steal one of the cars from Carhenge, but surprisingly none of them were gassed up) so there’s only one way we can go around and see what else the Midwest of America has to offer us.  And as a bonus, it’s one of the most American forms of transportation as well…

Damn straight, we’re going to hitch a ride on a train with some hobos.  Fuck yes.  We didn’t go too far on our first freight, stopping off at Hebron, Nebraska because, and excuse us if we’ve mentioned this before, but we fucking love unnecessarily giant versions of things.  Seriously, if the description starts with, “World’s Largest…” we’re all in.  So, when we heard about this we knew we had to stop for it. 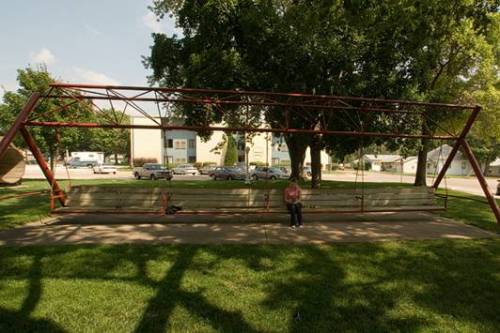 That’s the world’s largest porch swing!  Here’s what we love about this.

2.       This is one of the few things that is considered “The World’s Largest” that you are absolutely encouraged to touch with your ass.

3.       Despite being listed as the world’s largest “porch swing” it is nowhere even remotely near a porch.

Hebron’s town slogan is “A Nice Place on the Trail” according to its almost endearingly bare-boned website (general website summary?  “Hi!  We have a large porch…carry on.”)  We at AFFotD might be jaded, but we can’t be the only ones who find this whole thing to be a little too white bread to be realistic, right?  That porch swing looks really new.  And this whole “Oh aren’t we such a quaint town, look, a swinging porch!” angle just reeks of “We used to be famous for multiple homicides, and we hired a PR Firm to reinvent our image” doesn’t it?  Right?  Sure, Hebron might just be a small Midwestern town with a large porch swing.  Or, it could be the one town with the highest rate of baby-penguin-murder-per-capita in the world.  There’s no way to know.

Well we’ve had enough of this, the more we stay here the more we start to imagine the phantom scent of corpses.  If only Nebraska had another “World’s Largest ___” that we could make fun of…

Um..okay.  We’re…okay, we’re gonna level with you, we have no idea what the hell this is.  Actually, we don’t really have high hopes for this.  Just looks like some lame old art.  It’s not like there’s 1975 Chevy Vega or anything inside the pyramid, that would be pretty badass.

HA!  YES!  Oh…oh GOD YES!  Some crazy man in Seward, Nebraska, decided to encapsulate all the best parts of the 1970’s for his grandchildren to open in 2025.  That’s only 14 years from now!  Who else is incredibly excited for this?  There’s going to be a brand new Chevy Vega, aged 50 years, people!  This will finally end the debate our writers have almost every day at lunch.  “Does a Chevy Vega age like a fine wine, or does it age like you’d expect a Chevy Vega would age (horribly).”  Almost everyone assumes it’s going to age horribly, but now we’ll actually get to see it.  Hell yes!

With a smile on our face, we hop on a Southeast bound train, passing through Kansas.  The train has…fumes.  It’s hard to explain, but it’s a safe bet that we did not choose a good freight train to hop onto.  We just want to go as far as it’ll take us as fast as we can, so we don’t really feel the need to stop anywhere in Kansas.  Though we do see where a giant Monopoly Board Game piece got dropped on the ground randomly.

As we amble over to Missouri, sharing hobo-stories with our new hobo-friends who had a lot of helpful tips on how not to get stabbed in the spleen, which included, “Stop lookin’ at me” and “That’s my pissin’ corner,” we started to lose our patience for being dependant on trains for transportation.  Yeah it was all fun and cool at first, but every man has a lifetime number for how many cans of uncooked beans they can eat as a meal before they start to lose elements of their humanity, and we all reached our number in Topeka.  We decide we’re going to hoof it through Missouri, maybe steal a car, who knows.  There’d better be something to keep us entertained in this damn state that isn’t the Arch.

…That, fellow Americans, is a giant shoe made out of shoes.  S…Sorry, we…just give us a second.  We’re just so happy right now.  This is the most pointlessly brilliant thing we have ever witnessed, and we once saw Stanley Kubrick direct a slaughter house workplace safety video.  This is Clayton, Missouri, and we’re less astonished that someone decided to painstakingly glue together hundreds of shoes to make a larger shoe than we are surprised that this has not been used as a prop in a Tim Burton film yet.  From here, we ambled over to Chillicothe, which sounds like it should be the name of a ruined Aztec city, but instead is the best thing to happen to America since sliced bread.  We’re just getting started with that line of puns, by the way.

BOOM.  We all assumed America invented sliced bread, but did anyone really think it would have come from…Missouri?  In another move that reeks of “history cover up” like Hebron.  This town is so gung-ho about being the origin of sliced bread that there are only two possible explanations.  One is that sliced bread was invented there, and they are just so depressingly excited about it that their town website is actually www.homeofslicedbread.com.  The other possibility is that they just made that up, and use it to promote their actual pastime of having yearly festivals where they gather chubby Asian men who like to give thumbs up to plaques and just give them the full Hostel treatment.

Speaking of that Asian guy in this picture, we actually stole his car and started driving around the state.  In fact, you can see us driving away in that picture.  Juuuust to the left of the sign.  The beige Civic.  Dude had no idea.

We feel a little guilty about that, sure, but can you blame us?  We had just been told about a certain monument in the state of Missouri that we had to see.  We had to.

Heh.  Heheeehehehehe.  The world’s largest shuttlecock!  GET IT!?  Oh, don’t give us that look, if you were expecting us to react to the word “Shuttlecock” (hehehehe) like well mannered adults, you would have stopped reading this article as soon as you read that quotation glorifying drunk driving.  Heh.  Get it though?  Shuttle…cock?  More like spaceshipgenitals amiright?  Ahhhhhh.  That felt good to get out of our system.

After much giggling, we finally ended up in Michigan.  We had a pretty strong hankering for some fudge and saltwater taffy, and for whatever reason decided that Mackinac Island was the only place we wanted to go for it.  But in the meantime, we were able to catch a few of the sights.  There is, of course, the World’s Largest Cherry Pie Pan.

Much like how every damn hotel in the Wisconsin Dells’ claims to have the World’s Largest Indoor Water Park, these two pie tins are less than fifty miles apart!  And they’re BOTH specifically meant for Cherry Pies.  How the hell does this happen?  Is this some sort of small town arms buildup, like a Cherry Pie version of The Butter Battle Book?

We keep on driving, hoping we can find some sort of metaphor that would wrap up our trip nicely.  We wouldn’t even need to get any damn fudge or anything, if we found that one perfect item, something we could travel on that was huge, that we could take back to the AFFotD offices… 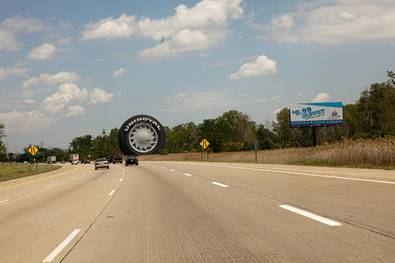 Wh…what’s that in the distance? 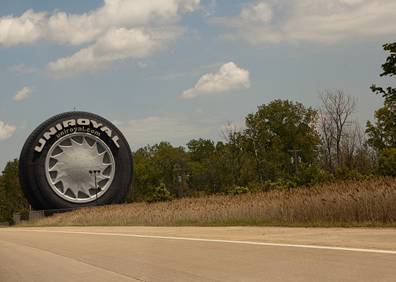 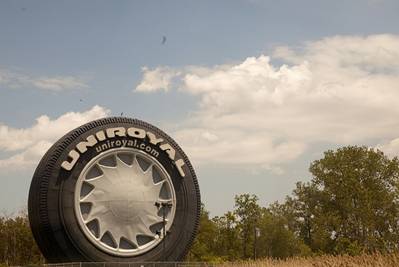 One response to “A Road Trip of Roadside Attractions Through America’s Midwest: Part 3”