The Civil War’s Most Glorious Mustaches 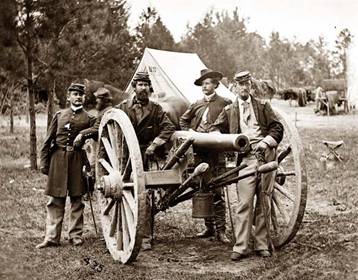 Every great war leaves behind a cultural legacy.  The Vietnam War spurned on counter-culture and PTSD.  World War II developed and hardened the so-called “Greatest Generation.”  The Korean War led to M*A*S*H*.  The impact of these conflicts have been scorched into our memory, making irreplaceable connections in our minds.  So, while we were riffling through the Smithsonian website looking for blueprints (we heard they have the Fonzie’s jacket there, and we fucking want it) we stumbled across this little item regarding the Civil War.  Because, when you think of the Civil War, clearly the one thing you associate with it is slavery glorious facial hair.

We were going to do a fun fact on the importance of office safety, ever since we had to send [REDACTED] to the hospital when he started shouting, “GONZO JOURNALISM” and licking our supply of poison arrow frogs, but really, we figure this is more important.  So, let’s rate some facial hair, everyone. 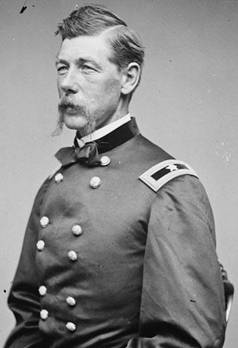 Alexander Shaler served as a Major General for the Union in the Civil War.  As seen above, his hobbies included Western interpretations of the Fu-Manchu and squinting.  Shaler received the Medal of honor for his actions in the Second Battle of Fredericksburg, and the bravery he showed on the battlefield was only matched by the impression you get that this man should always have a pipe in his mouth.  That seems to be the only purpose of that mustache, so it can just frame a nice, carved wooden pipe.  We’re not saying Shaler smoked a pipe while in battle, all we’re saying is…wouldn’t that have been pretty badass?

But seriously, if we had a mustache like that, we’d be forced to name it.  Gerald.  Yeah, Gerald seems like a good name for that chunk of facial hair. 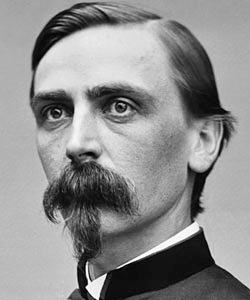 Adelbert Ames had the type of name you’d expect to see on a Microsoft Word document after you had temporarily passed out on your keyboard.  He also has facial hair that appears to have been meticulously grown so that the resulting hair-arrow would forever be there to silently answer the question “What does Adelbert Ames use to smell?”  This facial hair combination looks like it’s calling out his eyebrows.  Ames went on to have a fairly successfully political career, and was posthumously awarded the Medal of Honor for actions on the battlefield, but to us, he will only be known as Mustache McArrowFace.

James Ewell Brown Stuart was called “the most famous cavalryman of the Civil War” by a totally unbiased J.E.B. Stuart online biography.  He also has a fucking tank named after him, which is pretty badass and impressive for a man who died in battle in 1864.  But all we can really focus on is…doesn’t he look like he’s half Muppet, half Jeff Bridges?  Like, if a young Jeff Bridges went to the Jim Henson company and was like “I’d like you to make a wooly Muppet version of me” and then halfway through he went in and said, “Stop, stop all the work you’ve done, I’ve changed my mind dammit!”  We’re not the only ones who see that, right?

No wait, we know where we’ve seen this before.  Wasn’t that beard once home to a bunch of birds in an episode of Family Guy? 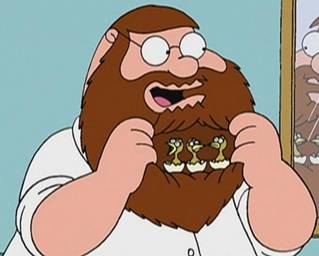 Ahhhh, there it is.

Though, when we talk about facial hair in the Civil War, it’s hard to leave out the classics… 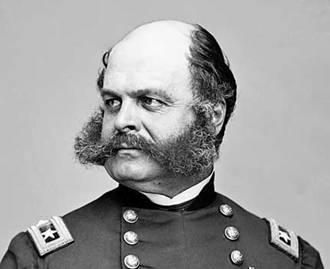 We have to put this guy on the list.  After all, he’s the reason why sideburns have their name.  And yes, it’s a glorious facial hair arrangement.  Long.  Luxurious.  Sloped upwards like some sort of facial hair NASCAR track.  But, maybe we’ve become jaded that in a world of Ambrose Burnside, we can only keep our focus for a short while.  Why, we even wonder if a crazy two foot long  beard on a tiny head could even hold our attention anymore. 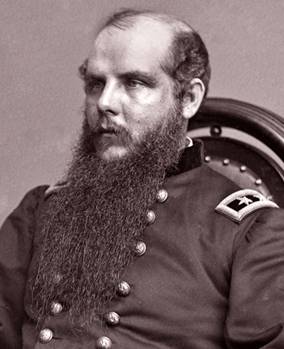 Haaaha holy shit.  It looks like they took union leader from season two of the Wire and glued about 40 inches of women’s hair to his chin.  Everything about this man’s appearance gives you the impression that he has never moved in the past two years.  John Schofield eventually became the Secretary of War under Andrew “The Drunk One” Johnson, but not before chopping off this hunk of beard that literally can be confused for a full shirt.  Not to spend too much time hammering this point home, but seriously, doesn’t this picture just smell like potato chips?  The beard, the combover, it just…it looks like Schofield was a greasy man, is all we’re saying.  Like, if this picture started talking, we’d sort of expect it to be breathing heavily and asking if we can bring him a bucket of fried chicken filled up with ranch dressing and marshmallows.  That’s the problem with just letting that thing grow, untamed- if you’re going to have an obnoxiously long beard, you gotta put some maintenance into it, or else you’ll just look lazy. 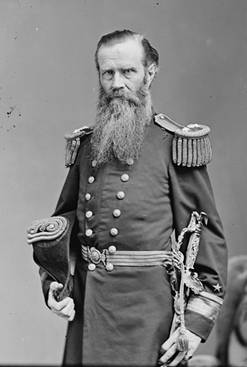 Oh that’s a goddamned beautiful thing.  Did he fork his beard to make it look more like a snake’s tongue on purpose, or does the physics of beards dictate that after a certain length it starts to branch out and take a life of its own?  Worden was a, snicker, Rear Admiral, which is actually a very serious and important rank in the Navy, and not an endorsement of the subliminal theme behind The Village People’s song, “In the Navy.”  But that’s enough absurdly glorious beards, lets get a straight up mustache in the party. 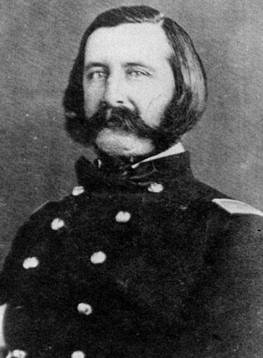 Ahhh, yes.  Yes.  That’ll…yes, tha’tll do just fine.  Goddamn, it’s like Tom Selleck’s mustache took steroids, and then jumped onto Ringo’s face during his Sergeant Peppers days.  It’s like Cliff from Cheers got eaten by Anton Chigurh from No Country For Old Men.  It’s like someone cut the hair off of one of the ethnic Barbies and taped it to the head of a Playmobile figure.  God bless America. 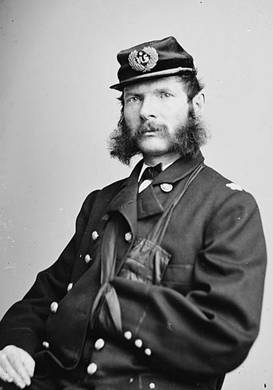 If you ever wondered what Eric Bana would look like if you glued some brillo pads to his cheeks, here you go- you just have to imagine him without the hat and the uniform, and voila!  What actually amazes us is that, for all of these Civil War veterans, none of their Wikipedia pages have a section for “Facial Hair.”  You’d think that someone, somewhere, felt the need to document this.  Like, “Samuel Carroll started growing his facial hair into a giant W when he was fifteen years old, because premarital sex was considered taboo and he had to find some way to stop the advances of the women he encountered.  This proved futile when, just three years later, Samuel Carroll’s beard impregnated three women while he slept.”  Don’t you think that’s the kind of shit we want to know more about, editors of Wikipedia? 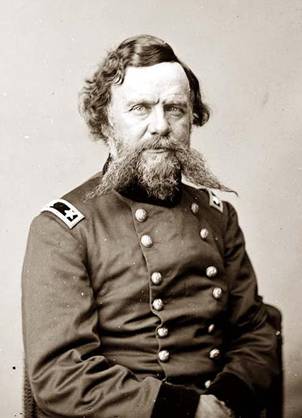 And last, but not least, we have Alpheus Williams, which sounds more like a sexual safe word than a General’s name, but nothing is safe about this beard and mustache combo going on here.  If you stare at his chin long enough, you start to see a face in the beard.  Like a little baby’s face.  We’re serious, try it.  Just stare at his chin and think “baby head” and you will see it.  And you won’t be able to unsee it.  It will haunt you, as it haunts us.  The ghost of the facial hair child…

But apart from that, that’s a pretty badass beard, and we salute him for it.

You might be saying, “AFFotD, which of these displays of facial hair is your favorite?”  Well, we can’t say.  They’re like our own bearded little children, you can’t as us to choose which we like more.  They’re all special in their own unique, impressively American ways.

6 responses to “The Civil War’s Most Glorious Mustaches”