“This is either gonna get me laid so much, or never.”

Many of you are staring at that man pictured above, no doubt muttering to yourself, “Sweet Pigeon-toed Jesus, AFFotD, is that a fucking moose…made out of beard?”

You’re absolutely fucking right it is.  This was the winner of this year’s “best beard” in the World Beard and Mustache Competition.  Yes, it’s real.  Of course America typically dominate the event.  Yes, there’s a reality TV show about it now.

America loves their facial hair, ever since the Civil War taught us how to be absurd with it.  To the point that there are no registered (no, seriously, officially registered) beard clubs in this country.  As in, more than one.  It was only a matter of time before we turned this into a competition where we could kick the world’s ass.  It’s a sport that only requires excessive testosterone, the desire to remain idle, and the ability to avoid getting long hair stuck in machinery.  How could America not be incredible at it, especially when there are entire divisions of competition that encourage you to dress up like a fucking James Bond Supervillain?

That is why we’re here to go through the rules, regulations, and American ability to kick ass in Competitive Beard and Mustache Growing.  Because if you didn’t know that was totally a thing before today, you totally want to compete in it now.  And that goes double for the ladies.

This is a different guy than Sex Dos-Her up above, but apparently bald white people with ridiculous facial hair all look alike.

The World Beard and Moustache Championship has a whopping eighteen different categories you can enter in, though suffice to say these categories are all facial hair styles so you won’t see too many “two sport athletes” as far as this competition goes.  Some of these “styles” involve gelling the shit out of your mustache, and some require that they be left alone.

The first style is the Natural Moustache.

There’s something depressing about this picture that we can’t put our finger on it.  We think it’s the look of disgust on the cute girl’s face, and the look of bewilderment on number 463s face.

The Natural Moustache must be, as the rules state, “a maximum of 1.5 cm beyond the end of the upper lip (may be styled but without aides).”  It’s only fair to assume that no Americans entered this event, because fuck the Metric System.  That goes double for the English Moustache, which apparently is a “long, slender moustache with hairs extremely long and pulled to the side.”  So basically it’s whiskers.  The goddamn English want to make an event of growing whiskers like a cat.

We’d prefer the insanity of Dali Moustache, which is pretty much an English Moustache with a hint of insanity.

Also, science has proven that anyone with a magnifying glass and a Dali moustache immediately takes on a striking resemblance to Johnny Depp.  Then we have the Imperial Moustache, or as we prefer to call it, the “Everyone who has this moustache will look like Wilford Brimley” (it’s also known as a Handlebar Moustache). 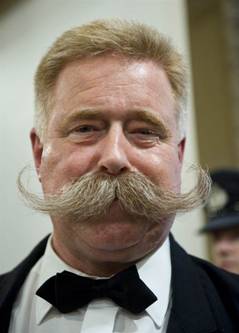 There’s also the Hungarian and the Freestyle, but surprisingly enough, when you’re just relying on hair from your upper lip you can’t get as “holy shit that man is crazy” about the whole enterprise.  There is a whole list of “Partial Beards” which comprises of “Natural Goatees” (With only facial hair on the upper lip and the chin), the “Chinese” style (which actually sounds more offensive than the name you know it as, which is a Fu-Manchu), a Musketeer style, the Imperial (facial hair everywhere but your chin), the awesomely named “Sideburns Freestyle,” the Partial Beard Freestyle, and in 2009 only there was competition for the “Alaskan Whaler” which apparently is for beards that have no moustaches.

By the way, the winner of the Sideburns Freestyle in the most recent championships was absolutely American.

The full-beard competition seems to be named like Starbucks sizes.  The “Verdi”- short and round- and the “Garibaldi”- broad, full, round, Italian political figure- lead things off.  Then there are the two most impressive beards, the “Natural Full Beard”, which is basically “How big of a beard can you grow” along with the “Natural Full Beard with Styled Moustache” which is “How big of a beard can you grow while making your moustache look awesome.”  There’s also the “full Beard Freestyle” which is that dude with the moose.  But as far as the competitions testing how absurdly long your beard can be…yup, American winners both.  Here’s the most recent winner of the “Natural Full Beard” looking like he’s auditioning for the role of “Cousin It” in the latest Addams Family reboot.

And Burke Kenny of America, the winner of the “Natural Full Beard with Styled Moustache” looks like he comes from a post-apocalyptic future where his job is to hunt and destroy Robin Hoods. 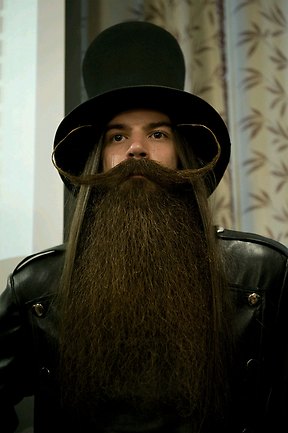 Now you have truly looked into the eyes of American super men.  When most people shave after a few days because they don’t like their face itching, this guy said, “fuck it, I’m gonna put several feet of hair on my face.”  And goddamn it, these Americans did.  Now get on it, America.  We’re sure there are like, beard steroids out there for you to use, and we’re pretty sure they won’t test for it.  Hint.

This entry was posted in The Best of the Rest and tagged America, Beards, Competitive Moustache Growing, Competitve Facial Hair. Bookmark the permalink.