A Brief Look Into Competitive Eating

“I demand to see men force foods down their stomach at dizzying speeds.”

~Marlon Brando (you know, after he sorta started ballooning up)

America has a fascination with overeating.  Each day, we hear phrases that invoke our gastronomical upbringings, like “Put your money where your mouth is” “Stuff ‘em like a turkey” or “That sex was almost as good as eating a crate of pudding cups.  Almost.”

Yes, Americans love to eat.  Maybe it’s because our most fattening foods happen to be the cheapest and most delicious.  Maybe it’s because humans evolved with food scarcity, and fat storage was once a sign of survival, which became conflated as a sign of affluence in impoverished nations where obesity is considered an outward indicator of success.  Or maybe it’s shut the fuck up and eat, this is America dammit, SUEEEE-WEEEEEEE, SUEEEE-WEEEEEEEE.

So we at the America Fun Fact of the Day have grabbed our bibs, and our glasses of water for dunking, and are here to salute those proud Americans who make a living as Professional Competitive Eaters.

Competitive eating has been in existence in America since the early 20th century, with the first ever Nathan’s Hot Dog Eating Contest at Coney Island occurring in 1916.  State fairs have often had competitive eating contests, eating hot dogs, pies, and other goods which we forced down our gullets in gloriously unhealthy amounts.  But it wasn’t until recently that competitive eating really took off, to the point that we could have professional competitive eaters.

And honestly, we at AFFotD cannot fathom why it would take so long.  We get to see people eat crazy shit, in massive amounts, for money, and they manage to get ridiculously badass nicknames that are better than the nickname of just about every baseball player except for possible, Ryan “The Riot” Theriot.  Let’s just take a look of these competitors.

o   Badlands apparently also works as a full-time subway conductor, and a hip-hop artist, while also being a professional competitive eater.  Now, if we told you “A competitive Eating, New York Subway Conductor, Hip-Hop artist” you might say, “So he’s probably like, a fat black guy right?”  And everyone would get so pissed off at you, because how dare you just blindly follow stereotypes and, oh wait, no, you’re totally fucking right.  He also holds not one, but two world records for most Matzo Balls eaten in competition.  We have no idea why he is called “Badlands,” but we’re hoping it has nothing to do with that God forsaken national park.  He has won $20,000 for stuffing his gullet, and has appeared on “Wife Swap” and “Last Call With Carson Daley,” basically just because he can eat a lot.  This country is pretty great. 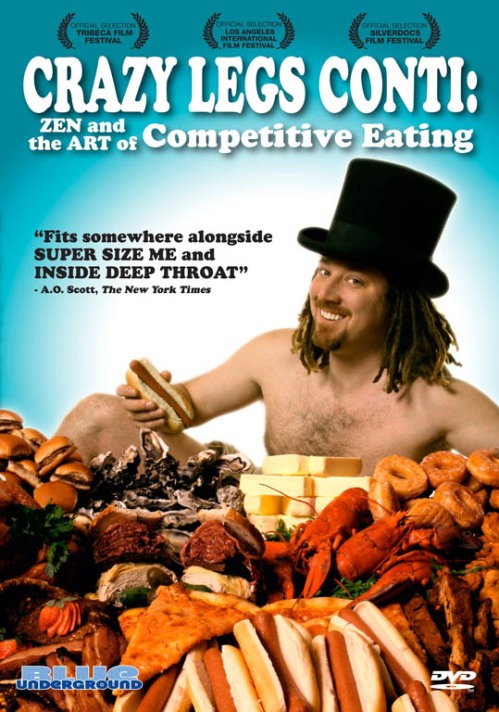 o   While he’s earned less money and holds less records than Badlands Booker, Crazy Legs has a far more badass nickname, and for some reason had a documentary made about him.  He has eating 2.71 pounds of green beans in six minutes, and once ate 400 oysters.  Jesus Christ, we’re not sure if we’re disgusted or impressed.  Correction, both, because that’s fucking badass.  It is only slightly distressing instead of a professional track athlete, it is a man who professionally sits down and eats a bunch who goes by the moniker of “Crazy Legs.” 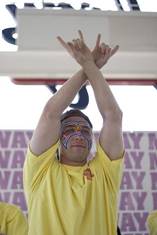 o   Eater X is Crazy Legs’ roommate, which no doubt leads to one of the highest grocery bills per capita in the nation.  Eater X is currently ranked 7th in the world, and his records include 141 pieces of sushi in 6 minutes, which we would have to guess led to one of the worst cases of dysentery this side of the Oregon Trail.  He is known for his stunts (like the face painting up there), and finished 2nd place in last year’s Nathan’s Hot Dog Eating Contest.  One year, when the contest occurred right before the release of the last Harry Potter book, he entered stage with a bigass sign that says, “Hermoine dies,” which is so funny we just had one of our staffers go to Wikipedia to find out if that really happened or if he was blowing smoke out of his ass.

o   Okay, that is a name that is just, perfect for this.  The Locust?  Yes, exactly, just gives you the mental image of watching a field of corn, and then a thousand locusts descending and leaving it barren.  We love it.  The Locust’s wife was also a competitive eater, retiring in 2002, and LeFevre has the incredibly badass distinction of holding the world record in jalapeños consumed when he ate 247 of them in eight minutes.  Jesus Christ, that is reckless, dangerous, and incredibly spicy.  YES!

…When we hear “The Locust,” this is not what we were expecting…

o   Holy shit you guys!  HOLY SHIT!  Okay, first of all, there is a tiny Asian woman who is a competitive eater, and she’s like the fifth ranked in the world.  Secondly, like…for the gentlemen here on this list, you’d totally consider it right?  Like, if this girl went up to you at a bar, and was like, “Hi, I’m a world ranked professional eater,” and you were feeling a little buzzed, you would absolutely take her home, wouldn’t you?  Of course you will, because you have a tiny voice in your head, and it is called, “AMERICA,” and it knows that you could never turn down the chance to tell that story. She is known as The Black Widow, because she constantly beats male competitors who are much larger than her (because she only weighs 100 pounds).  She holds the following records, which amount for enough food to feed a small AMERICAN town, which is glorious.

~11 pounds of cheeesecake in 9 minutes 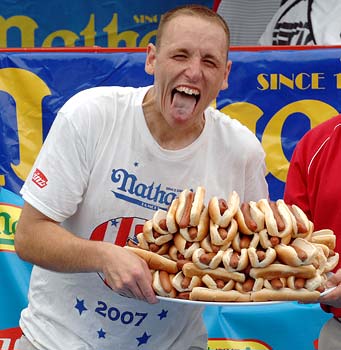 o   Apart from being the American responsible for taking the title of best eater back from the Japanese, Joey Chestnut has eaten 68 fucking hot dogs in one sitting.  And he has the nickname we last saw in a goddamn BOND MOVIE.  There is NO denying the glory of that.

So to these eaters of food, these devourers of Cow Brains (…really?  there are competitions for that?  Fucking really?) these champions of American…well, badassery, we say…God speed.

One response to “A Brief Look Into Competitive Eating”