“Yes, we want you to write about the baconator.  We’re tired of you using our money to talk about other people’s food.  No tricks.” 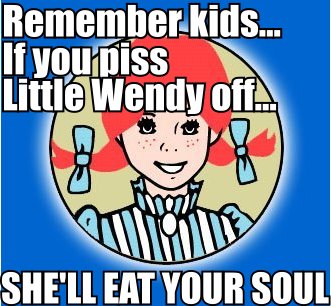 You’ve no doubt noticed that every once and a while, when we’re particularly strapped for cash after having to pay one too many “destroying the nests of an endangered species of bird” fines, we turn to our “sponsor,” Wendy’s.  Normally we’ve found occasion to talk about crazy foods we’ve just discovered while feeling a little part of us die every time we are forced at gunpoint to write something like, “Wendy’s!  It’s food so good, you won’t believe it!  Just like none of you should believe the suicide note if we turn up in a ravine!”

The last few times we’ve written about food have not been particularly…well received by our, uh, handlers.  As in, we’ve had our Fun Facts hijacked a handful of times.  As in, we used to have a lot more pets around the office before the Wendy’s executives figured out how to get past our security system.  Pour one on the curb for Sparky.

That’s why, for today’s post, Wendy’s decided it was “too risky” to let us pick what to write about, so they just straight up told us, “Write about a Baconator.”

“Bacakonator?” we mumbled while sipping on a glass of whiskey.

…We haven’t much time until they figure out what we’ve done.  Come with us if you want to hear about the bacon funnel cake.

The Wendy’s Executives are going to get here any minute now, so we’ll start things off by confirming your suspicion that the above glorious culinary monstrosity somehow has something to do with NASCAR.  The Charlotte Motor Speedway decided to sell this in advance of the Bank of America 500 Sprint Cup Race that took place on October 23rd.   The Bacakonator takes a giant funnel cake (read as- fried dough) and then douses it in chocolate and strawberry sauce.  It then goes to your heart and says, “Hey, heart, look over there” and jabs it right in the back of the head while it’s distracted by covering the whole thing with enough bacon to give Babe PTSD.

If you served this in Muslim countries, it’d technically be considered a war crime.  The reason why they decided to sell this at a NASCAR event (other than, you know, America) is that they knew that if someone who was keeping kosher ever came within a hundred yards of it, everyone in a six mile radius would be sucked into a hell dimension.  But the good folks at the Charlotte Motor Speedway weren’t done there.  They also added this diabolically delectable item that is in no way related to those free will hijacking bastards at Wendy’s.

Yeah, that right there is Pimento Macaroni and Cheese Angus Burger.  Garnished with pork rinds.  Because, if you’re going to offer foods that Jewish people can’t eat, you might as well go all out with it, this burger was designed by the nightmare an Anorexic Rabbi once had during Passover.  We once took one of these, ground it up, and gave it to a Vegan saying it was a “soy smoothie” and the Vegan exploded faster than a pigeon being fed a handful of rice.

The Charlotte Motor Speedway also offers a “healthy” menu with these foods called “The Danica Patrick Fit Fuel menu.”  While that in itself saddens us- we used to think that Ms. Patrick was pretty, but now that she’s trying to push turkey and, gasp, veggie burgers on us she suddenly looks like a snarling demon.  We’re not saying we hate her, but we’re saying that we’re one “support healthy lifestyles” commercial from reaching that point.  But it makes sense that they balanced out the menu with this “healthy” stuff- without healthier options than “1,300 calories with 77 grams of fat” and “764 calories with 34 grams of fat” the menu is technically considered a hate crime ever since “arteries” were legally made an ethnicity.

So, you NASCAR fans, we implore that you enjoy these delicious, totally unhealthy food items, and…oh no… 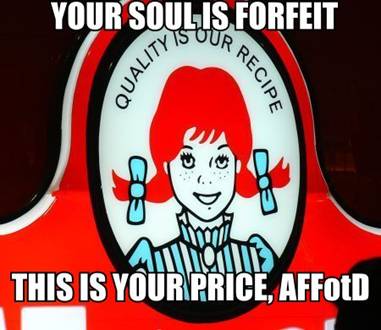