The Worst Reality Shows of America (#5-1)

“Even I wouldn’t degrade myself to do this midget show.”

As discussed in yesterday’s Fun Fact, American entertainment hinges around the laziness encouraged by the creation, and viewing, of reality TV shows.  And since praising thing is boring, we decided to focus on the negatives.  That’s why we’re here to finish off the last five entries in…

5.  Are You Hot?  The Search for America’s Sexiest People (ABC)

Reality TV Shows are lazy, but they’re at least driven enough to find the hot people who happen to be insane, alcoholic, or incredibly slutty.  That was too much work for Are You Hot? which literally took attractive people and…told them if they were attractive or not?  If there’s one thing more boring than trotting out a shitload of people to stand still without talking for five minutes at a time, it would have to be listening to a bunch of E-list celebrities try to find new ways to describe someone as being hot without relying on “Hey bro, nice abs” or “booooooobs” as your sole descriptions.

Did you know that by today’s standards, Cleopatra would have been considered pretty unattractive?  Maybe it’s a sign that beauty is culturally subjective, or maybe it’s a subject matter that’s more interesting than an entire TV series centered around people looking at attractive people and saying, “Dude, you’re hot.”  Who knows.  All we know is that “Being Hot” is only a valid career path for receptionists and club promoters, and that’s even irrelevant for this show, because we don’t think any prize was given out other than being told “you’re attractive” which most of the contestants would have been able to pull off just by sitting alone on a bar stool for an evening.

The fact that so many people wanted to be “judged” on this show actually gives us an idea for our own Reality show.  It’s called Fishing for Compliments, and we take a bunch of young, sexy twenty-somethings who want to be told that they’re attractive and put them on a boat, which we float out to sea so that none of them ever seen again.  Fishing for Compliments, airing on Fridays on FOX at 8, 7 Central.

Somewhere, a TV executive once said, “You know what Reality Dating Shows are missing?  Bondage and physical comedy.  If only there was a way that we could have something that allows all sorts of trips and pratfalls…oh, I got it!  We can have one person with four members of the opposite sex chained to their limbs!  Like, a lady on each arm and a lady on each leg!  And then it turns into an elimination dating game, because one at a time people get unchained!  That’s brilliant!  We’ll finally bring UPN into the mainstream of respectable Reality TV Shows.”  Of course no one could hear what he was saying, because with the ball gag in it just sounded like “MMMFFPH  MMMFFF” but you get the idea.  Eventually the idea was put on screen, and it was just about as awkwardly bad as you’d expect.

Listen, UPN.  If we wanted a TV show that centered around watching people try to hook up while chained to other people, we’d go down to our sex dungeons to see how our Gimp is getting along with the second Gimp we just introduced to his cage.

Though it is a pretty telling indication on how desperate Americans are to get on TV.  If someone goes up you and says, “We want to chain you and three other women to a man until he figures out which one of you he wants to bone,” most people would go, “You’re a fucking pervert” and reach for their mace.  But when you start that sentence with, “Hello, I’m a Television Producer, and…” it’s all of a sudden okay.  Oh, speaking of sexual offenders…

3.  Who Wants to Marry a Multi-Millionaire (FOX)

Looking at that picture, the least surprising thing that we could tell you would be that the guy on the right had an ex-girlfriend file a restraining order on him, and that the girl on the left would go on to pose for playboy.  So instead we’re going to come up with a series of clearly wrong statements about this couple.

1.        The happy couple in this picture remains married to this day, where they run a foster house for puppies and stranded baby ducklings.

2.       These two lovebirds spent their honeymoon in Reno, Nevada, and she totally let him have sex with her.

3.       These are two emotionally healthy adults.

So when the good old boys at Fox decided to center a show around fifty women vying for the affection of a silhouetted multi-millionaire who would marry the woman he chose on the spot, they were too busy trying to convince themselves that the process didn’t resemble a sex-slave market that they totally overlooked the whole “we picked a Millionaire who technically is not a Millionaire, and who, oh, was accused of domestic abuse by his ex-girlfriend” thing.

The marriage got hella annulled right away, probably because the winner (Darva Conger) realized that the Millionaire (Rick Rockwell) looked a lot like a creepy monster (Dracula). 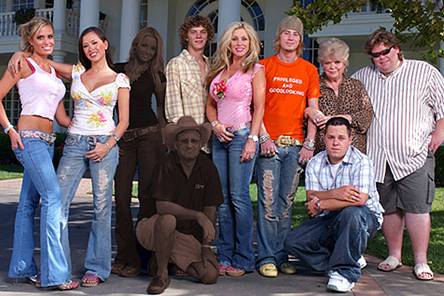 Pictured above is the result of a lot of hard work and dedication of at least two of Los Angeles’ breast augmentation specialists.  Also, a TV series that lasted one episode before network executives screamed, “You weren’t supposed to air that, it was meant as a joke!” and started firing people.  The concept of The Will is as simple as it is morbid.  A 73-year-old wealthy land developer, Bill Long, hosted this Reality Series that determined who got to be the primary beneficiary in his will.  The whole thing lasted only one episode before being cancelled, which leads us to wonder- if an old man films a TV show to figure out who gets to inherent his estate, and nobody watches it, will we see signs of his struggle in our plane of existence when the minions drag his soul down to hell?  It was never aired, but according to certain spoilers, the winner ended up being the Gold Digging wife (pictured above in the center in the pink shirt, boobs) so at least we know that this failed TV show irreparably damaged the relationship between Bill Long and his 18-year-old son!

Unfortunately, younger boobs (pictured far left) and fat shades guy (pictured far right) didn’t win either, but stoner (pictured middle right, orange shirt) scored some pretty killer weed from one of the Production Assistants, so it wasn’t a total wash.  Also, we should point out that no photoshop was used in this picture, and that two of the family members actually suffer from an unfortunate genetic disorder that turns them Sepia.  Which actually would have made for a more interesting Reality TV show.  Meet the Sepias.  Man, we are on a roll today, get the head of Fox on the phone!

Who are we kidding, this is the best show ever.  With a whopping one sentence long Wikipedia page, it aired for two episodes and featured an eligible “little person” bachelor trying to find love among “little women” and regular sized ladies.  Holy hell, we want to watch that right now.  Forget sarcasm, that sounds like it’d be glorious.  Sure, all these other ones might suck, and they really missed out on their chance to call the show Midget Marriage, but we think this is awesome.  And to prove it we’re going to close out with pictures of the best show ever.

The average-sized women absolutely look like they still have a headache from when the Producers knocked them out with Ether to get them to go on this show.  Also, how great would it have been if he rejected the girl at the bottom right for being too short?  That’d be kind of awesome, right?

No idea what’s going on here, and we don’t even want to know.

Huh.  Now that is a pretty confusing erection.  (She ended up “winning”)

…And she finished in second place.  Read all the nice things her home town has to say about her here.

This entry was posted in Miscellaneous America and tagged America, Are you Hot, Chains of Love, Kim Kardashian, The Littlest Groom, The Will, Who Wants to Marry a Multi-Millionaire, Worst Reality Shows of America. Bookmark the permalink.

One response to “The Worst Reality Shows of America (#5-1)”