If America and Japan were listed in a relationship on facebook (and if they were 15 years old) it would absolutely say “It’s Complicated.”  Japan not only attacked Pearl Harbor, they did so in a way to inspire Michael Bay to make a movie about it, while America got back at them by dropping two atomic bombs on them.  But despite the animosities of the past, Japan has always had a vested interest in Western Culture, and in many ways has tried to emulate and mimic the practices of European and American cultures.

Unfortunately, this is the origin of the phrase, “Goddamn it Japan, you’re doing it wrong!”  When the West started brutally Imperializing other countries, Japan took it to uncomfortable levels by trying to make the Korean language illegal.  When the West started making warplanes, Japan decided to turn them into suicidal fireballs.  When Japan noticed that the West has rounder eyes, they started mutilating themselves to look less Asian.

However, we at AFFotD have just discovered that Japan might be gearing up for a cultural war with America by doing what America does best without adding tentacles.  It’s a terrifying time for all of us.  These are the stakes.

Burger King is an American corporation, and despite what you would assume, Japanese Burger King is not a sick sex act, it’s the Japanese branch of the fast food chain.  This makes their use of incredibly American promotions in Japan all the more frustrating.  They’re trying to teach Japan how to be more American than America, and we can’t have that.  Culture War.  It’s on, bitches.

Now, while many of you saw the seven patty Whopper and thought, “Wow, that’s pretty goddamn American” you’d actually be getting ahead of yourself.  Seven Hamburger patties placed together to make a monstrosity in the name of advertising a software product is actually just cartoonish enough to be more in the vein of “Goddamn it, Japan, you’re doing it wrong!”

But, increasingly, due to the nefarious Culture War instigating actions of Burger King’s Japan locations, Japan is starting to do it right.  For example, in April of this year, they unleashed the Meat Monster to terrorize the streets of Tokyo.  While this food should clearly have originated in America, it was the Japanese who first got to experience the 1,160 caloric combination of two hamburgers, a chicken breast, two slices of cheese, and three pieces of bacon.  It’s a glorious monstrosity which should be fueling America’s future healthcare costs, but instead is being used by Burger King Japan as a warning shot in the inevitable Culture War.  Just look at this thing. 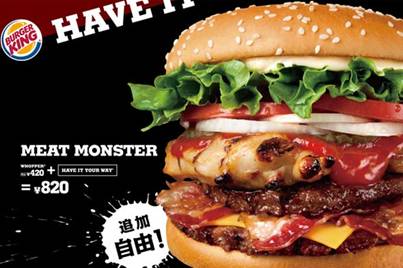 Don’t look if you’re keeping Kosher, it will literally melt your eyeballs

As troubling as this development is, the most recent promotion by Japanese Burger King (again, not a sex act, at least not until we finish writing our urban dictionary entry) has pushed things into a frightening area that could lead to Japan attempting to challenge America on who is more American.  These geniuses/monsters are marketing an all you can eat Whopper special.

Japanese Burger King (not the sexual act that involves a Japanese Flag, a Tupperware container, and a crown made out of Tamagotchis) has taken two American institutions- the hamburger, and the all-you-can-eat special, and has merged in a way that America hasn’t even considered.

That’s right.  Culture War.  If Japan is going to try to Out-America America, we’ve got to Americanize the hell out of Japanese staples and make them American.  The partial list would include

–          Sushi that replaces the fish with steak tartar, and which replaces the rice with more steak tartar.  Basically just take a hunk of ground up, raw steak and call it sushi.  That’ll teach them.

–          Did you know Japan eats seaweed salad?  We’re not going to do anything with that, but every time Japan tries to show us how American they are with their all-you-can-eat Whopper specials, just point out the fact that we at least don’t eat seaweed and call it a salad.

–          Stop taking Saki-bombs until further notice.  You’ll have to rely on Jager bombs until this ban is lifted.

America needs to stay vigilant if we are to weather this storm.  Be as American as you possibly can.  Even if you can’t find all-you-can-eat fast food, order as many burgers as you can physically fit in your stomach.  We can’t let Japan become better at being American.  And, as long as we stay drunk enough, God willing, we won’t.

This entry was posted in Japan and tagged America, Burger King, Godamn it Japan You're Doing it Wrong, Japan, Saki-Bomb. Bookmark the permalink.