“I said put down the Peeps, for God’s sake!”

There are three kinds of people in America.  Children, people who still love Peeps because they remember their childhood fondly, and people who think Peeps are way too sweet for their taste and/or are diabetic and don’t want to fall into another Easter coma.  But no matter what category you fall into, it’s important to remember that there is no ego to the marshmallow Peep—if you went up to someone obsessive with Peeps and said, “I think Peeps are gross, the texture is weird and they’re too sweet” they’d probably just shrug and go, “Yeah, I can see that.  I like them, though.”

That’s because the question of if you like Peeps or not depends on if you like mainlining sugar into your system until the world starts to vibrate around you, with a secondary question of if you like your world-altering sucrose delivery system to be soft and fluffy, or left out a few days so it’s a bit stale in a weirdly appealing way.  Either way, when you think of Peeps, you think of mutilated faux-chickens that all taste the same no matter what color they come in.  And you would be wrong.

Strangely, not only are there flavors of Peeps other than “Impossibly Sweet,” there are over a dozen, and just about every single one seems like a horrible idea.  Like, a two-article–spanning amount of badness.  This is what happens when you mess with perfection, people.  Or, like, just try to add weird flavors to things that don’t need any more flavor. 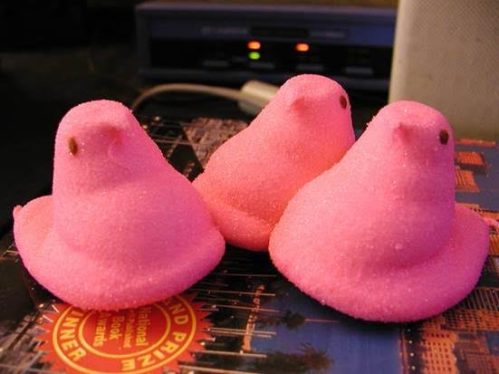 The first Peeps were made by the Rodda Candy Company out of Lancaster, Pennsylvania.  Every Peep was painstakingly handmade and folded into the bird shape, taking over 25 hours to complete each batch.  In 1953, Rodda Candy was bought out by Just Born, a candy company based out of Bethlehem, Pennsylvania.  They immediately took the Peeps and developed a way to mass produce them.  Originally, Peeps came with wings, but they were streamlined down to the wingless version we now know and love a year after the acquisition.  Starting in the 1960’s, other shapes were introduced, which is why you can now get a variety of non-Peep shapes, such as the Easter Bunny Peeps that somehow don’t taste nearly as good despite containing all the exact ingredients.

At some point around 1999, however, it was decided that sugar flavored marshmallows needed other flavors, leading to Peeps flavored like chocolate, or candy canes, or other flavors that sound like they’d taste worse in Peep form but are still acceptable enough to not make this list.  Because, honestly, there’s no reason why we should have the ability to buy Peeps that taste like…

The shit is this, Peeps?  First, a little background—a type of Peep that is available that most of you don’t know about are dipped Peeps.  That’s where they take a regular marshmallow Peep (or a flavored one which, shudder) and dip the bottom in a hard shell of some flavor—usually a fudge or a chocolate.  In this case, these peeps have a caramel “fudge” hard coating at the bottom, which gives them more of a rubber ducky vibe than we think anyone at Just Born is willing to admit.  But, leaving that aside, and even leaving aside the fact that caramel, which is basically sugar melted in butter, seems like an overkill addition to the already hauntingly sweet Peep, we still have to ask…seriously?  They’re making green apple flavored Peeps?  Why would you do this to us?

To those of you not sold by our convincing argument of “ew, apple Peeps sound gross” let’s try this on for size—close your eyes (well, metaphorically—you kind of have to have your eyes open to read the rest of this) and imagine eating a Peep. Now imagine washing that down with a nice cool glass of apple juice.  That gag reflex you just experienced is your body telling you that this is a horrible flavor for a Peep to have.

The first three items on this list actually were just released this year as special flavors for fall.  Peeps have always seemed to be self-conscious about the fact that they’re largely viewed as a “Easter only” treat, and have put honestly a bit too much effort into trying to get you to overdose for special occasions throughout the year.  Peeps try to shove hearts down your throat for Valentine’s Day, they try to convince parents that Halloween Peeps shaped like pumpkins are an acceptable substitute for fun size candy bars (they are not), hell they even make chocolate mousse reindeer Peeps to ruin stockings with shitty fake chocolate-tasting marshmallows.

This fall series at least has the novelty of specifically going for “fall flavors” as opposed to giving us regular peeps shaped as, we don’t know, fucking leafs or something (which actually would probably be better than any of these flavors).  The main problem, however, is that most fall flavors are bullshit, because fall is the one time of the year where you try to convince yourself that you like candy corn, and then the next thing you know your molars are coated with impacted traffic-cone-colored chalky earwax.  We hypothesize that there has never been a person in America who truly liked candy corn, and if you’re the lone candy corn devotee reading this, by all means leave a comment so the rest of the world can know that you have poor and wrong opinions and apparently would rather eat a sugared candle than actual candy.

So of course, the good folks at Peeps decided, yes, that flavor, that’s the one that they would like to make available for the masses.  The bottom sugar coating (all of these come with the hardened bottom shells) of this one is white fudge, which apparently tastes pretty good on its own once you ignore the fact that resting atop it is a sugary abortion that looks like a regular Peep that came down with the fucking Measles from some unvaccinated California granola child.  This is bad and wrong, and Just Born should feel bad about it.

Oh go fuck yourself, marshmallow Peeps.  Get this Yuppy trendy bullshit out of our faces.  Get your latte swilling, get the kids to soccer practice on time, cinnamon huffing asses out of here.  You know when you see something that you can immediately spot as pandering?  That’s this flavor.  You can practically see the exact meeting where some 40-something brand rep is excitedly telling the people at Just Born about how pumpkin spice is “all the rage” right now, making sure to use the word “Millennials” no fewer than a dozen times.  When people talk about not liking society, they’re normally loner cranks, but the kernel of truth to their core belief that America is in the toilet can be found in the existence of a pumpkin spice marshmallow Peep.  Lord almighty. 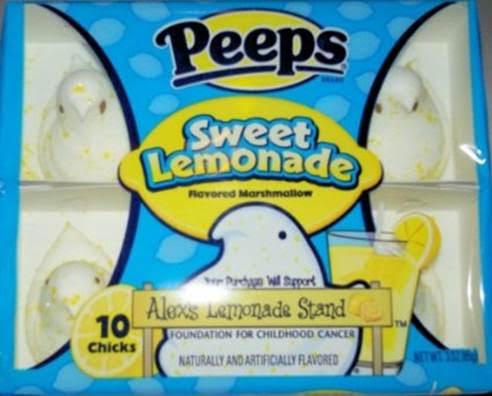 Now, there is also a Lemon flavor, which is a horrible idea for a sugary marshmallow flavor as well, but we figured we can’t have two lemon entries on this list for reasons that maybe only make sense to us.  We decided to go with sweet lemonade over regular lemon because sweet lemonade sounds like a trick.  That doesn’t sound like a thing that can exist.  Which means that they’re embracing the sugar flavor of Peeps, which is good because the only true flavor of Peep that’s really acceptable is “sugar”, but they’re adding just a hint of lemon to annoy the fuck out of your taste buds, sort of like when you go to a fancy restaurant and really just want regular water, but no matter what will end up with a giant lemon wedge in there that’s supposed to make the water more “refreshing” when really it just tastes like “horrendously watered down juice.”  That’s what we have here, only in super-sweet Peeps form.

Now, we will say that this is at least an altruistic flavor—each purchase of sweet lemonade Peeps will bring money to Alex’s Lemonade Stand, a children cancer foundation, which is very admirable!  It’s also an unfortunately shitty flavor, so no one is going to buy it, so really Peeps just screwed Alex’s Lemonade Stand over real good.  Hey Peeps, why don’t you just promise to donate for every regular package you sell?  Or better yet, why don’t you just donate to the children’s cancer charity no matter how many of your shitty lemon sugar birds you sell?  That’s probably the best option here, right?

Sour watermelon is secretly one of the best flavors of candy around.  Next time you see someone eating a Sour Patch Kid, introduce them to Sour Patch Watermelon and watch the tears swell in their eyes as they realize how much of their life has been wasted making wrong decisions.  It’s the best flavor.  But you know what it’s not?  An acceptable flavor for a fucking marshmallow!  We can’t believe we have to point this out!  Marshmallows should be sweet, and fluffy.  They should not be sour, or fruity.  And God help you, Just Born, for daring to combine the two.

You’re getting fancy, Peeps, and there’s no reason for it.  Do you really think people are so likely to get sick of the flavor of “ungodly sweetness” that you’ll lose our attention unless you bring out a variety of poorly thought out flavors?  Or are they banking on a boost of sales from all the people that see sour watermelon Peeps and think, “Ha ha, oh man that’s gotta be gross right?  Well the only way to know for sure is to spend money and purchase it”?

We give up.  There’s no point trying to understand the logic, all that matters is that these flavors exist, and if God isn’t dead he at least isn’t paying very close attention at the moment.  Sigh.