“Why are we still doing this?”

A few weeks ago, we talked about marshmallow Peeps.  Specifically, the fact that marshmallow Peeps, which exist only to taste like sugar coated with more sugar, with the added benefit of being able to bite the head of a cute inanimate object, puzzlingly comes in a variety of flavors, most of which are horrible.  The formula for the Peep is basic—pump enough sweetness into a marshmallow as you can without it technically becoming a hate crime, drop it in some children’s Easter baskets, and laugh as you watch their parents hopefully try to control them.  Trying to make Peeps taste like anything else is just showing off.

Well actually, it’d be showing off if they were actually good at picking flavors.  Which they are not.  So, they’re showing off in the way you’re showing off if you try to do a backflip and land on your fucking neck.  Anyway, here are some more mistakes made by the Just Born company, makers of marshmallow Peeps. 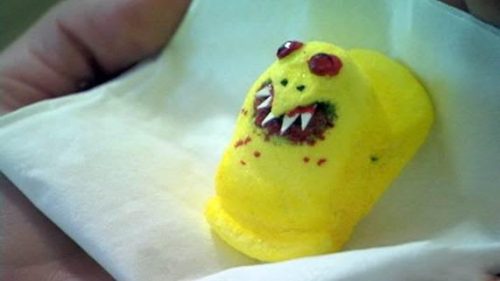 Whenever we’ve done an article picking out the grossest flavors of certain products, we usually have to do some digging.  As a general rule, candy and treats exist to be consumed, so it doesn’t really make sense to make a lot of flavors that are niche, which is a polite way of saying, “No one likes them except for that one cousin of yours who likes to slurp his spit when conversation gets quiet.”  That was not an issue here—not only is this the second article we’ve written listing awful flavors of Peeps, but all we had to do for research was scroll through their own website, because 90% of the non-original flavored Peeps are a goddamn train wreck.  Normally when we write about companies we jokingly ask them to send us free samples, but that definitely will not be the case with… 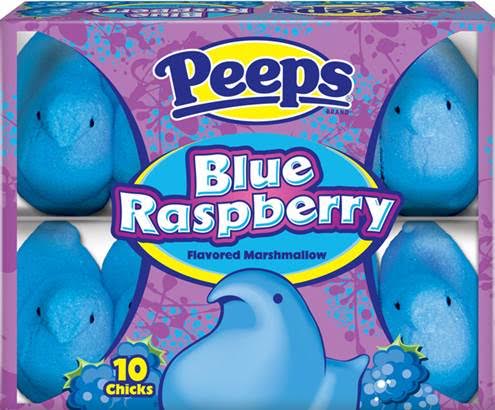 As an artificial flavor, blue raspberry is an affront to nature.  We feel like it’s silly to point out that blue raspberries aren’t an actual thing that exists in nature, and that this is just a catchall term for kind of sweet, kind of tart food flavoring that tastes distressingly “blue” and is primarily found in syrup poured over ice, except for the fact that we can guarantee that at least, like, 25% of Americans totally think that blue raspberries are a real fruit.  But even the mouthbreathers who believe that can take one look at blue raspberry Peeps and say, with complete certainty, that they would rather drown in a silo of sugar before eating these monstrosities.

We try to keep a level head here in the AFFotD offices, and we try never to overreact, but if someone gave us blue raspberry Peeps we would feel completely justified in ending their life right then and there.  “Ha ha, oh, good joke there, AFFotD,” you might say.

No.  We’ve never been more serious in our lives. 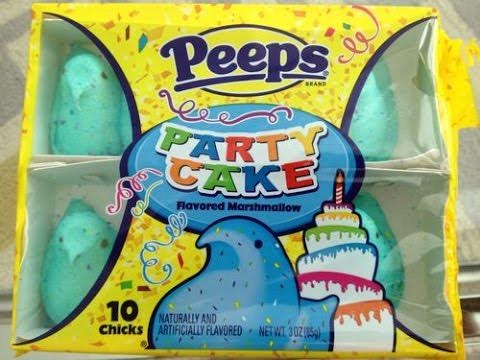 Everything is wrong with this, from the attempt to make sugar balls taste like cake, to the color being a shade of blue-ish green that looks like it was left in the sun for a week to fade out, to the “sprinkles” covering the whole damn thing.  This is listed as having natural and artificial flavors.  If we were to guess, we’d say that the natural flavors are “sugar” and the artificial flavors are “the condensed feeling of loneliness that can only be found by a grown man celebrating his birthday alone while a candle flickers from a single Party Cake Peep on a dirty white plate as he sobbingly sings ‘Happy Birthday…to…me.’”

For some reason, this is a surprisingly common “limited time!” flavor you’ll find among dessert treats and candy.  Why do companies assume that we want everything to taste like birthday cake?  Birthday cake is fine, but it’s hardly the best thing in existence.  No one loves birthday cake—the only reason people get excited about birthday cake is the empty calories and the excuse to not work for the 15 minutes it affords you and your coworkers when it’s time to celebrate an office birthday.   It seems like a last resort for candy makers.  “Well, we’ve run out of ideas…fuck it, cake?  People kind of like cake right?  Like it’s not the best, but it’s, you know, it’s fine, right?”  The only difference is that Peeps pretty much started at this level of not giving a shit, and just went downhill from there.

Peeps are not cake.  Stop trying to make Peeps cake.  We don’t want to have to say this again.

The fudge dipped Peeps are an abomination in their own right, but orange marshmallows dipped in orange fudge just seems like the worst combination of anything.  Again, this is a simple matter of passing the “how do these ingredients, separated, seem like they would taste together.”  So sure, if you’re the kind of person that likes take bites out of an orange in between your Peeps, well, you’re a sociopath, but even you would have to draw the line at adding “orange flavored fudge” on top of all that.  We feel like we can’t say this enough—Peeps are not made to taste like fruit.  Stop trying to make them taste like fruit!

Jesus fucking Christ, Peeps, who hurt you as a child?  Take everything we just said about orange, and then get rid of all the sweetness involved, and here’s what you have—a tart chocolatey marshmallow.  That’s a combination of flavors that is guaranteed to register as “poison” the moment you bite into it.  Eating a lime-flavored Peep, we suspect, would be a lot like catching on fire and having a group of homeless men surround you and extinguish the fire by peeing on you.  Yes, you survived the experience, but it was hardly pleasant.

And also, who wants to eat lime fudge?  No one, that’s who.  Lime fudge sounds like something your friend who moved to Germany primarily for sex parties would be into, and when he asks you if you “like lime fudge” you’d just sort of pretend like you know what he’s talking about and be like, “You know, I tried it once, but I just don’t think it was for me” before your friend rolls his eyes and calls you a cis.

Nothing should be flavored “mystery.”  Ever.  That’s not how taste works.  You should be able to eat something and be able to say, “Huh, this tastes like sugar” (in the case of a Peep) or, “Huh, life is not worth living” (in the case of lime-fudge Peeps).  When someone hands you something to eat, if you ask, “What is this?” and they respond, “Ha ha, it’s a secret” well guess what, you now know who is going to be the one to kill you, and it’s that motherfucker.  But, if you manage to suppress every warning sign and actually try what’s being offered to you…and you still have no clue what it’s supposed to be, then you’re not eating food, you’re probably eating a pillow or are hallucinating.  Or eating a pillow because you’re hallucinating.

According to reports, because we are nowhere close to insane enough to actually try these damn things, but they were described as “tangy” which is not one of the top five words we’d want to see used to describe our mystery Peeps flavor.  They eventually announced the flavors (there were two of them) to be sour green apple and fruit punch…except that the fruit punch was apparently exceptionally tart, which means that the people at Just Born clearly don’t know what fruit punch is supposed to taste like.  Granted, that’s not a huge surprise, since they don’t understand what joy is supposed to taste like, since they went out of their way to make colorless Peeps that are sour and flavored like fruits just so we could eat them, be repulsed, and be completely unable to guess what it is we actually put in our fucking mouth.

Well that was just distressing all around.  Hopefully this is the last time we’ll have to write about gross Peeps for a long time.  Unless they decide to make a Peeps beer or something.  Oh, goddamn it, you guys, seriously?

2 responses to “More of the Grossest Marshmallow Peeps Flavors”