~Um, That’s Not The Theme Song To Captain Crunch… 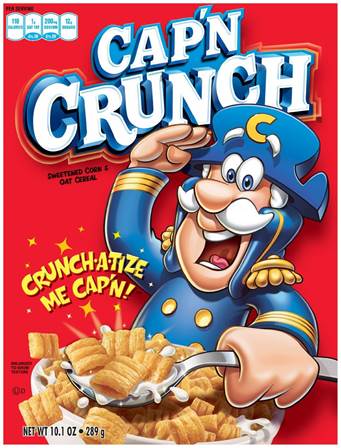 When Captain Cap’n Crunch first hit the shelves in 1963, we didn’t worry ourselves with the fact that he’s not an actual Captain, and instead went wild over the corn-based cereal that was the first to be coated in a thin layer of oil to give it an additional boost of flavor.

The cereal itself was developed by Pamela Low, a flavorist (shut up, it’s a thing) (no it actually is) at Arthur D. Little who tried to make a cereal that tasted like her grandmother’s recipe of brown sugar and butter melted over rice.

Now, as far as “tasting like sugar butter over rice” goes, Captain Cap’n Crunch was an abject failure.  But if we look at the product through a “holy shit, this is really good, let’s put some crunch berries in it” lens, it was a roaring success.

Yes, much like Marshmallow Peeps, Oreos, or, God help us, M&Ms, Cap’n Crunch has tried many times to fly to the sun, only to see their waxen wings melt away. That was a very elegant metaphor about how you shouldn’t sell Cap’n Crunch that comes with fucking pop rocks in it. 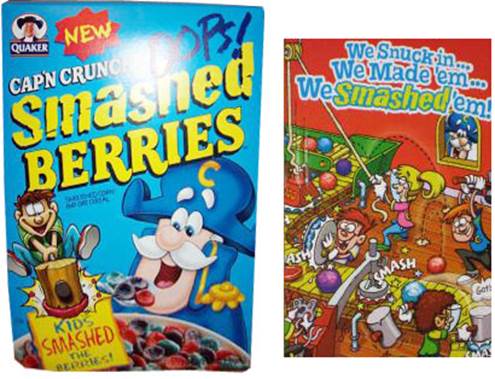 There are literally 25 types of Cap’n Crunch that have at some point found their way to your grocery aisle, and that doesn’t even include the, “Surprisingly good!” Cap’n Crunch Bars.

Cap’n Crunch, surprisingly, is not a cereal company that feels content to rest on its laurels. They keep churning out innovations.

Some of these, like the 1967 release of Cap’n Crunch’s Crunch Berries or the 1969 release of Peanut Butter Crunch, were great ideas, arguably elevating Cap’n Crunch to new heights.

Some, like Oops! All Berries, can inspire violent debate between pro-berry and anti-berry camps. And some are just horrible, terrible, borderline terrifying ideas.

We’re going to focus on that last group.

The worst part of eating Cap’n Crunch is that it mashes the shit out of the roof of your mouth. That isn’t a case of us being sarcastic, we mean that sincerely—Cap’n Crunch is delicious, but it’ll chew out the top of your munching cave worse than a Drill Sargent spotting an unmade bed.

Cap’n Crunch took one look at this problem, and one look only because a second look would have given them the realization that no one likes soggy cereal, and decided to make a softer version of Cap’n Crunch.

“Soft” is not a word most people want to hear in a description of their cereal, nestled right between “rotten” and “chemically turns into poison when milk is added” on the list of worst possible Breakfast cereal adjectives.

Not surprisingly, the “our normal cereal tastes like tiny knives out to get you, would you like a softer version of that” promotional strategy didn’t exactly take off, and Soft Crunch has thankfully been long since taken off market.

Cap’n Crunch wants to distract children with weird shit.  Like, a lot of their limited-edition offerings are just “our regular cereal, with this ZANY GIMMICK that will make sure the children aren’t paying attention to anything else.”

To what end? We do not know. Is it nefarious? Most assuredly maybe. But a prime example of this “look over there” Breakfast tactic occurred in 1999 with the release of CoZmic Crunch.

The normal square cereals were made into star shapes (because aliens!) while the crunch berries were made into planets (you fucking liars, they were spheres already!) to appeal to the 6-to-12 demo.  All this is well and fine, except for the one addition they made to truly make it…upsetting.

Orange powder (wait for it). To sprinkle in your cereal (wait for it). To make your milk green (your God is now dead). That’s the grossest sounding shit, but it’s not that surprising. From 1998-2001, everyone assumed that kids wanted food that came in colors that poisonous foods normally came in.

Remember fucking green ketchup?  Anyway, if the idea of a cereal that asks you to put an orange powder into a white dairy liquid to make it a sickly sweet green, then this product is for you, and also, we’re glad you found our site, Creative Director who came up with the idea for Cap’N Crunch’s CoZmic Crunch. 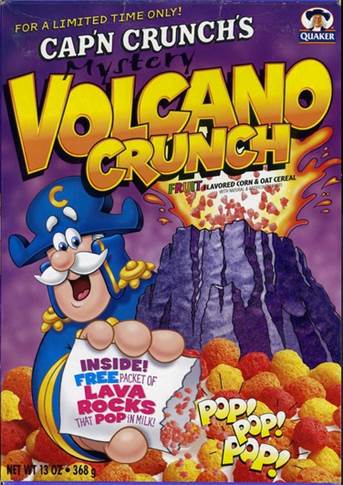 Remember that whole “Cap’n Crunch is distracting kids for something sinister” theory from before? Well their Mystery (a word you NEVER want to hear describing something about to go inside you) Volcano Crunch cereal upped the ante by going about an entire marketing gimmick in 2000 where the Cap’n was “missing” and you had to find clues on boxes of cereal to decode where he is (he was in a volcano).

And then they put packets of Pop Rocks for kids to put in their milk while they eat their cereal. Which, again, Pop Rocks and Cap’n Crunch aren’t exactly things that go together. 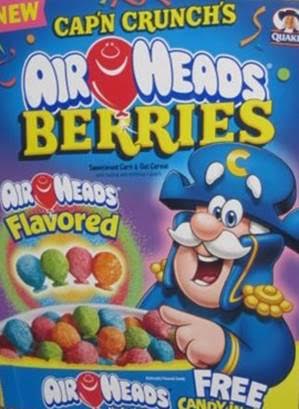 You know what’s a flavor that we don’t want our milk to take on? Sour. Just. No.

What the everloving fuck is even going on here?  This is 2016, and there are billion-dollar companies that actually think it’s a “fun” idea to try to make us Cap’n Crunch that’s flavored like an orange creempop?! They don’t even try to make orange-flavored berries because, well, okay, saying that out loud, because they’re berries, but also because orange and milk is not exactly the most welcoming combination.

We don’t care if you try to creampop that shit, there is nothing about an orange creampop that makes a person not currently suffering from a mild stroke think “oh yeah, let’s dip this shit in some Cap’n Crunch.

This is wrong, and bad, and the Cap’n should get demoted for this. Next year’s limited edition C’mander Crunch flavor better learn from the mistakes of 2016, is all we’re saying.