(Even More of) America’s Most Ridiculous Fried Foods

You see what that is up there?  Chicken fried bacon.  We just figured we should rip that band-aid off right away, and let your brain adjust to that.  You know how, when you’re Scuba Diving, you’re not supposed to surface too quickly?  Well looking at this picture puts you all in danger of coming down with the Fried Food Bends.  It’s too much too fast.  You’re going to end up as an early Radiohead album.  Only, you know, fatter.

AFFotD has always been on the vangard of introducing you to the most terrifying foods that carnivals and deep friers have to offer.  It’s our duty to inform you of the most efficient ways to get calories in your body faster than Kirstie Alley falling into a vat of butter.  How else are we supposed to earn our blood money from Wendy’s if we don’t create a dozen new fat people everyday?  That’s right, we couldn’t, and their hired goons would ensure that our entrails were never found.  And we happen to like our entrails very much.  Which is why we’re here to team up with our ally, transfats, and present to you…

(Even More of) America’s Most Ridiculous Fried Foods 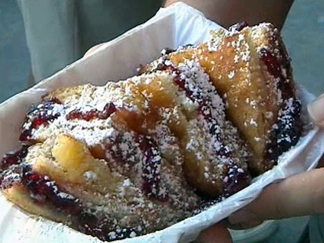 Our attention was recently called to an article announcing the winners of the Fried Foods Award in the Texas State Fair, to which our first thought was, “Holy shit that’s amazing why doesn’t every state have it.”  (The answer is that California would award it to like Fried Tofu or some shit like that, so that would defeat the damn purpose).  And goddamn it, it so excited us that we needed to dig deep into the terrifying, Japanese-meat-made-out-of-shit realms of the internet to find even more delicious foods for you to scoop out of a popcorn container as you’re watching TV shirtless and sobbing.  Sobbing and alone. 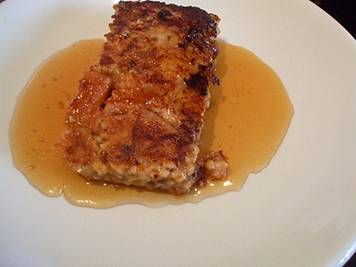 To address anyone’s curiosity, let’s go into a quick discussion of what “Deep fried” actually means.  What are you doing to a food to make it “Fried” this or “Deep Fried” that?  Deep frying is a dry cooking method, meaning no water is used.  The process involves taking food and submerging it in boiling fat or oil.  The difference between a fried food and a “deep fried” food is that the latter is completely submerged, while the former is simply cooked in the oil or fat.

What we’re saying is, this is a type of cooking that immediately makes it impossible for it to be good for you.  You literally take oil and fats- concentrated, pure fatty materials- and dip the shit out of the stuff.  Usually a dough or outer layer of breadcrumbs is used to encase the food within, but no matter what you’re making your food incredibly fattening as soon as you decide to fry it.

Why would we go into such detail on the textbook definition of frying one’s food?  Because we want you to appreciate America even more than you already do.

You see what that is up there?  That’s Fried Oatmeal.  So that means, someone took oatmeal and decided to form it into a rectangle bar and fry it in oil.  But, when this enterprising American realized that…oatmeal in itself is moderately healthy?  They decided to douse the fucker in corn syrup to add extra unnecessary calories.  They took something healthy, made it unhealthy, paused…and said “fuck it, let’s make it unhealthier still.”

Doesn’t that make you feel incredibly proud?  Well, now that you’re in the mood to gain enough weight for your insurance company to cover the deductable on your Rascal Scooter…

This one actually requires an explanation, because America as a society has reached the point where we no longer can just fry simple things.  In order to be unique we have to combine several fried foods and put them in other fried foods.  Basically, if “Fried Butter” and “Fried Snickers” were our alphabet, we’d have long since reached the point of having to name things A1, B2, etc.

So in the case of the Fried Buffalo Flapjack, what you have is a buffalo chicken strip that is coated in flapjack/pancake batter, rolled in jalapeño bread crumbs, deep fried, and served with a side of syrup.  Because SNL ultimately was right about the direction that Tex-Mex was going. 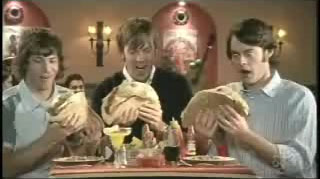 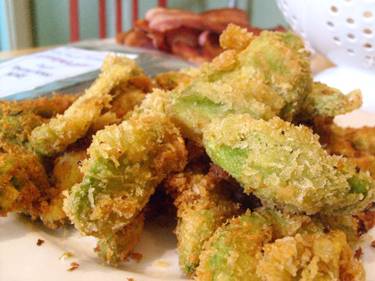 Speaking of food invented by Americans to mock Hispanic culture, Fried Avocados are only notable because their creation defies explanation.  You think of Avocados you think of something you’ll mash with a spoon, not something you’ll stick in a deep fryer.  It literally takes four steps to make this happen.  Mac and Cheese is less complicated to make than Fried Avocados, which actually doesn’t seem at all surprising once we say it out loud. 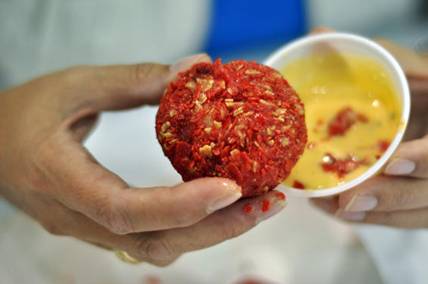 And closing out our trifecta of “Fuck you, Mexico, we do your food so much better” is Fried Salsa.  Which is basically salsa ingredients wrapped in tortilla chips, fried, and served with a cup of cheese, because really if there’s one area in cuisine that America needs to start focusing a little bit more on, it’s the use of liquid cheeses as garnishes.  Every time you take a bite out of deep fried salsa, the ghost of a soldier who served at the Alamo magically appears and buys you a goddamn Chalupa.  The existence of Fried Salsa makes us so delirious with foody joy that we momentarily forgot that it’s technically offensive to point out that this is a Mexican food product, invented in America, which no doubt is still being served by a Mexican.  Oh, crap.  Uh, forget we said that, we don’t need the ACLU on our ass…again.

Not after that whole Ukrainian thing.

The name of this item gets you so confusedly excited that you become disappointed at things that are glorious.  You just saw that picture and thought, “Holy shit!  Fried Bubble Gum?  Does the deep frying thing like, make it so you can swallow it or something!?”  Hold your horses there, Ms. O’Donnell.  What you’re looking at is a marshmallow that has been lightly flavored with bubble gum flavoring, all of which has been deep friend and covered with icing and sprinkles.  But before you get all “Charlie Brown buying a Christmas Tree to sad music” about that fact, think about what we just told you.

They took a marshmallow, flavored it like fucking bubble gum, and then deep fried the shit of it before deciding, “You know what, let’s make it even more like cake.”  Yeah.  Now you feel pretty selfish, don’t you?  Don’t worry, this next will make you forget all your troubles. 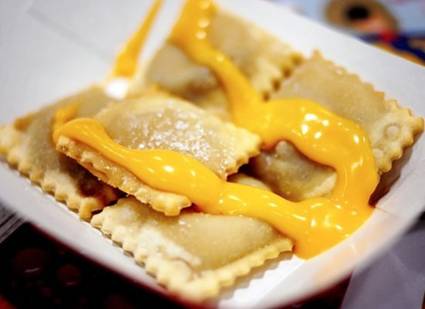 “Wait, I must have read that wrong, did you just sa-“  Yes.  Yes you heard that right.  Fried.  Fucking.  Beer.  Beer pocketed in pretzel dough, and fried.  Why is there cheese on this Fried Beer?  The fuck kind of question is that, why don’t bars start serving us liquid cheese when we order beer is the question you should be asking.  This is just the pinnacle of American achievement.  Finally, a more efficient way to get drunk and fat.  Every time an exercising teetotaler closes their eyes, this is the image they see accompanied by thunderous organ music.

The moment this was invented was the moment someone made an American Flag out of bullet shells.  The first time someone paid money to eat it, France mysteriously refunded us the money we paid them for the Louisiana Purchase, saying, “It’s okay, consider it a gift.”  Every time you look at that picture of Fried Beer, the Statue of Liberty winks at some immigrants.  This is why we fight, people.  This is why we fight.