As we’ve mentioned time and time and time again, America loves Fried Food even more than we love Hulk Hogan, and don’t get us started about how much America loves the Hulkster.  The moment you choose to fry a food, you make it unhealthy and therefore delicious, and anytime someone says, “I don’t think you can deep fry that” they are automatically deported back to France and are placed in forced mime labor camps, where they must spend their days wearing white face makeup while they pretend to break and move boulders while trapped inside invisible boxes.  And they totally deserve their fate—when someone asks you if you would eat a deep fried sports car, the correct answer is, “Holy shit, where can I find that!” not “Uh, no, you…you realize that our bodies can’t consume metal, no matter what you do to it, right?”

And as summer approaches, so does State Fair season, which is that magical time of year where aspiring fry chefs look to get middle America as fat as possible without causing their hearts to explode, like some obesity version of Jenga (once things start wobbling you have to wait for it to settle before finishing the piece).  So in that fine American tradition, we are here to clue you in on even more fried foods created to take you that one step closer to just giving up and intravenously pumping melted butter into your arteries between meals. 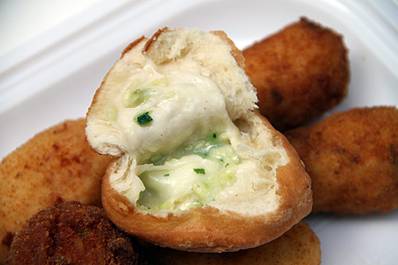 When Fried Foods were a relative novelty, people used to go up to chefs and ask them what they were thinking, why they chose to bread and deep fry that particular food.  While hundreds of years ago, a chef might have had to say, “I felt that frying the mozzarella would enhance its flavor, while leaving it in a semi-solid state that would melt in your mouth” or some such nonsense, chefs now can politely retort to such inquiries by saying, “DON’T QUESTION IT JUST PUT IT IN YOUR SLOP HOLE C’MERE LITTLE FATTIES OINK OINK OINK!”  And as you look for a grease filled napkin to wipe away your chubby little tears, you’ll be able to fill that gaping maw in your soul with the following delectable treats.

We don’t know much about science, but we do know that the reason why we don’t cook things that can melt is that the process of cooking them tends to, you know…melt them.  It’s not like anyone’s tried to deep fry a Popsicle…holy shit, wait, someone needs to get on that (or, correction, someone who isn’t a Chinese person writing in comically broken English, get on that!).  But this logical gap didn’t apply to ice cream, which not only has been fried, it’s not even a relatively new phenomenon.  Apparently, as soon as people started realizing that you could deep fry candy, they figured out that you could bread ice cream, quickly deep fry it, and be left with a hot-yet-cold sweet and fatty treat for your taste buds.

If you’re going to fry something, you might as well fry something that defies the very laws of physics.  We’re pretty sure that 90% of our research into cold fusion technology rests on the hope that we can someday learn how to deep fry a raindrop, assuming we can take that technology and use it on single solitary tears rolling down the cheek of an Indian watching someone pollute.

Of course, we’ve managed to find ways to improve on this technology (the frying cold, viscous desserts thing, not the tears of a shattered people one).

What do you get when you take a pie that has been scientifically proven to be far more American than apple pie, roll it up in a tortilla (because reasons) and fry the whole bastard until any pretense at nutrition is gone?  Apart from being a syringe away from Dexter Morgan’s version of euthanasia, you’ve got an American treat delicious enough that you’d consider stabbing your fork through the hand of whoever tries to take the plate away from you before you’re done.  As a general rule, if you’ve created a food that can inspire general bloodlust, you’re doing something right.

Of course, key lime pies aren’t the only addictive dessert available in their fried form, since it’s a matter of time before you’ll see shrieking pony tailed girls trying to sell you… 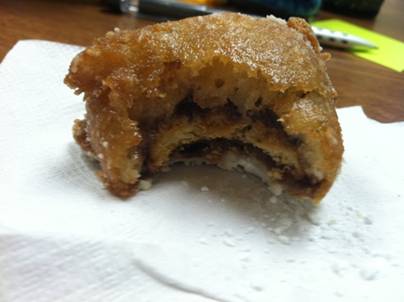 We don’t have a phone, hypothetical-reader-being-used-for-humorous-convention.

We know, we were just being a dick.

“Right.  Anyway, is this even legal?  Girl Scout Cookies are pretty much the most addictive thing on the planet, right alongside heroin, pornography, and Law and Order SVU marathons.  What kind of cookies were deep fried for the 2012 Texas state fair?  Tagalongs?”

“Oh sweet sugary Jesus, so does that mean…”

We all have diabetes now, yes.

Deep frying cereal is not something that should be taken lightly.  One small misstep and you go from “taking concentrated sugar orbs and frying them” to “deep-frying special K like some sort of fucking chump.”  Thankfully, food vendor “Chicken” Charlie Boghosian, the man responsible for the deep-fried Twinky and deep-fried Kook-Aid balls (heh, balls), knew that if you were going to deep fry breakfast cereal, you had better stick with the extremely sweet ones, like Cinnamon Toast Crunch or Twix (moment of silence for French Toast Crunch, which couldn’t be included in this wonderful day since they stopped producing it in 2006, the bastards).

Just look at those beauties up there.  Well, don’t stare too hard—if you look at them without blinking for 30 seconds, Wilfred Brimley loses a foot.  If you fed these to Paula Dean she would instantaneously dissolve into sweet tea.  Everyone who has ever tried eating this now no longer can give a reliable reading of their insulin levels, since all test results come back as saying, “Man, I fucking give up, just do whatever you want, I don’t even care anymore.”

But all of these fried treats lack one important, American quality.  That’s right…we want something that’s fried that can get us drunk.  Well look no further, because holy shit you guys… 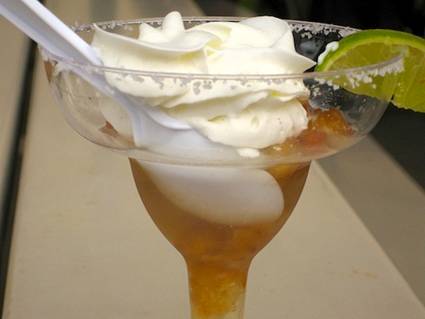 America, you make us so proud, sometimes.  We know we don’t say this enough, but…we love you America.  You fuckin’ get it, man.

Now if you’ll excuse us, we’ll be falling into a drunken food-and-diabetic coma after properly snarfing down all of these delicious, American dishes.