“Why would you go and do that to a perfectly good hot dog?” 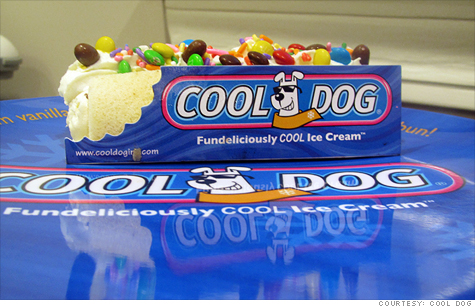 America’s tireless of cholesterol-boosting culinary delights have yielded some of the most delicious foods imaginable.  Our can-do attitude allows us to not only invent the key lime pie, it drives us to invent a way to fry a key lime pie.  We’ve crafted the perfect hangover drink, and we’ve learned how to make pizza alcoholic.  And of course, we as a nation are also responsible for the most efficient and glorious nitrate delivery system—the hot dog.  The hot dog is the epitome of America’s culinary excellence, but for every delicious meat tube scarfed down in an eating competition, there is a monstrosity created by someone overreaching to try to make a hot dog something it is now.

Hot dogs are cheap, delicious, American, and can support a multitude of region-specific toppings, but sometimes we go too far.  And while we salute those who try to push hot dogs upwards to dizzying heights, we also caution them that sometimes one may soar too high, and it’s best not to look down.  Especially when you are creating… 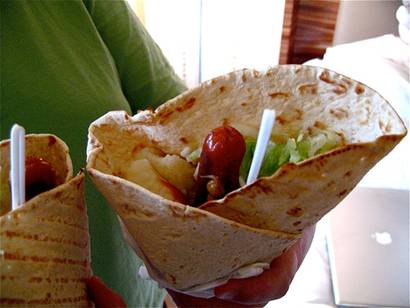 Hot dogs are a lot like your wife’s college years—you’ll be a lot happier if you try not to think about what went into them.  The hot dog is a tube of meat that we put into a piece of bread we cut in half, but it’s of course much more than just the sum of its parts.  Sure, the perfect hot dog already exists, but each hot dog and bun is a blank canvas ready to birth a masterpiece.  Sometimes this leads to someone putting chili and cheese on a hot dog.  And sometimes, it leads to hot dogs like the following.

This entry into insanity actually comes from our neighbors up north, but we’re going to assume that they smuggled some American transplants to come up with this terrifying idea.  Listen, we’re all for combining savory and sweet food items, but  it feels sort of unholy to see someone stuffing a hot dog into an éclair.  We can’t put our finger on it, but our best guess would be that saying “stuffing a hot dog into an éclair” sounds like a really obvious sexual euphemism, but since it’s with an éclair it sounds like it would involve a French woman?

Listen, we know it’s really easy to make dick jokes about hot dogs, but you’re not really doing the food any favors by replacing the bun with a pastry that’s filled with cream.  Come on guys.  Of course, more American-based sweet-and-savory hot dog combinations don’t seem any less unsettling. 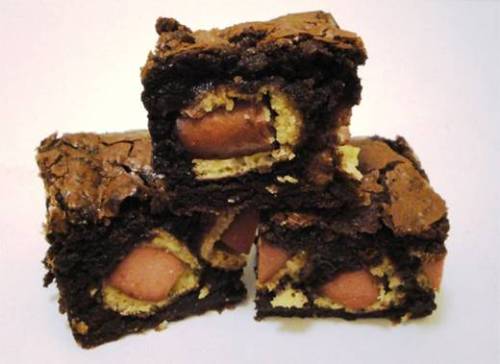 Yes, this is real.  Hey, if you want to make them yourself, here’s the recipe.  No one has really thought of combining hot dogs and brownies before, but that’s mainly because no one has ever looked at a hot dog and thought it would be a good idea to drizzle chocolate over it.  You know how every once and a while there’ll be a nature show, or an episode of Survivor, where someone bites into a fig and thousands upon thousands of baby spiders start crawling out?  Well, it doesn’t matter if you’ve ever seen that before, because that’s the official sponsor for your nightmares tonight.  You’re welcome.  What we’re saying is, with that image in our head, the idea of biting into a brownie and finding chunks of meat in there that, let’s be frank, look kind of like human fingers at first glance does not sound particularly appetizing.

See, even if you didn’t think that the picture up there looked like fingers before, you do now.  And again, chocolate on a hot dog?  That’s…that just sounds gross.

Okay, full disclosure, we’d actually eat the hell out of this hot dog.  But, much like mainlining an obscene amount of heroin at once, or having sex with Angelina Jolie after she’s mainlined an obscene amount of heroin, while we’d enjoy the experience, we probably wouldn’t survive it.  Available at Pasadena’s The Slaw Dogs, this sumbitch takes a foot-long Vienna beef hot dog, adds beer chili, cheddar, bacon pastrami, French fries, grilled onions, and a fried egg, and wraps it all together in a tortilla.  If you asked us to make a sketch of this so-called Hot Dog, we think we’d be able to pretty accurately represent it just by drawing a heart monitor as it’s flat-lining. 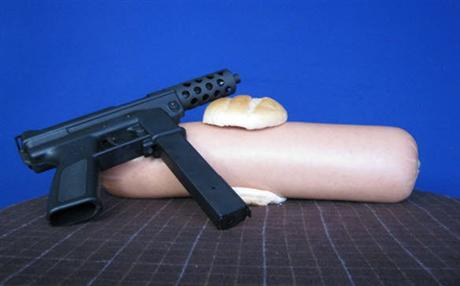 Whatever The Fuck This Is 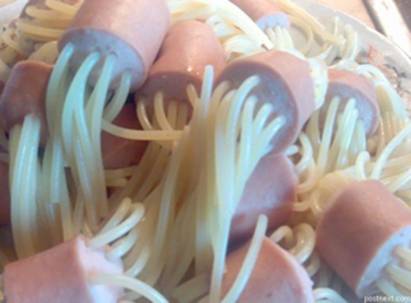 We don’t know who was the first person to decide to insert raw spaghetti through chopped up hot dogs and boil the whole terrifying concoction, but we wouldn’t be surprised if one of these days a few dozen bodies turned up in their yard after a particularly heavy rainfall.