[REDACTED] Watches Things Get Flushed Down A Toilet

America has a fascination watching American appliances being used in a manner that would never be needed in real life.  While most of us would never use a blender for anything more complicated than a smoothy or an affront to the culinary arts, we’ll absolutely watch a youtube video where it’s used to pulverize an ipad or a live squirrel.  Do you put bricks in your washing machine?  Of course you fucking don’t, you’re not a psychopath, but now that we mentioned that as a possibility you totally want to see that done on a machine that you personally didn’t pay money for, don’t you?

This logic applies to toilets as well, as we can see in this awesome, pointless video with horrific sound quality where an old guy just flushes a bunch of shit that isn’t shit down his super toilet.  Sit back and watch it.  No, we’ll wait.

Okay, are you done?  Good.  Because we’re enthralled by this video, and we haven’t really heard from our good pal and undercover journalist, [REDACTED] lately, we figured we’d put him in charge of going through this video and discussing each and every thing that gets flushed in unnecessary detail.  Take it away, [REDACTED].

Is it a bad sign that I’m reviewing a video of a toilet, and it’s actually one of the better assignments the asshats here have given me?  I’ve still got PTSD from that Vegan meal…

Anyway.  Here’s a company that feels that the best way to sell their toilet is to show it flushing down more food and electronics than a Rosie O’Donnell android.   They feel the same way about sound quality and proper background music as I do about sobriety and washing my hands after going to the bathroom.  By which I mean to say, they’re awful at both of those things.  But enough about me and my constant cases of pink eye, let’s take a look at what Colonel Sanders here wants to flush.

Actually, let’s take a pause for a moment.  There are so many places you can do this video, and so many workers you can choose from to be your spokesperson for your youtube video, so what led them to go with “take the soft spoken owner of the company and put him on the factory floor while machinery is running.”   I’ve seen better sound quality in a public Colonoscopy.

But enough about that.  Let’s look at what they choose to flush for our entertainment value, and more importantly…why?

I’m tempted to list every single item here like I’m the Count from Sesame Street.  Three.  Three shitty flip phones.  Eh eh eh.  How is this an impressive demonstration?  First of all, it looks like the guy here is just putting in his daughter’s old cell phones that he had replaced on his family plan three contracts ago.  Remember the Razr?  Razrs were the “future” compared to the phones wading in this tiny toilet pool.  That’s right, these are the kind of phones whose existence allowed people to get super excited about a phone that doesn’t get internet but is kind of thin.

Secondly, and most importantly, don’t you not want your toilet to be able to fully flush your phone?  I mean, sure, these cell phones cost five bucks on craigslist and come with a hand job,  but if you dropped a smart phone down the toilet, wouldn’t you prefer it could somehow not get flushed?  If you want to impress me, show me a phone that knows how to flush everything except for a cell phone.  If I ever bought this toilet I would spend all my time trying to flush my friends’ phones when they’re not looking.  Well, you know, if I had friends.  Which I don’t.  Because I spend all my time trying to flush their phones down the toilet.  I think I might have a problem.

Okay, if this is a situation you’d ever need to address, toilet-flushing-wise, then you’re exceedingly lazy and probably don’t have much respect for our sewage system.  Let’s be honest, the only time you’re flushing cigarettes down the toilet is if you or a person close to you is trying to quit smoking, and so cigarettes have to be disposed of so the temptation to smoke isn’t there.  But if that’s the case, who isn’t going to just do that one pack at a time?  Who is like, “Oh man, if only I had bought a toilet with the flushing capacity to flush two packs of cigarettes at a time, I’d save five flushes per carton!”  If you just answered, “Actually, that sounds like something I’d say,” then I don’t know what you’re doing on this website, but your computer is a bomb now, and you’re the worst.

And please tell me I’m not the only one who realized that this is clearly not the hand of the spokesperson, who is wearing a non-metallic watch and not a gold chain.  God, American Standard, get your shit together.

“So honey, what are your plans for this Sunday?  It’s beautiful outside.”

“Well, I was thinking I would go down to the driving range, maybe buy a bucket of balls, head home without hitting them, and then flush them all down the toilet.”

“…Why would you want to flush golf balls down the toilet?”

“Because I saw this American Standard video, and considering what they think you should flush, I’m pretty sure they assume there’s an advanced society that resides in the sewers who are just desperate for technology, entertainment, and cigarettes.”

You’re ridiculous, American Standard.  Though admittedly, this is by far the coolest looking demonstration, because this is the first time you’ve flushed something that’s looked like it would clog.  So that’s something at least. 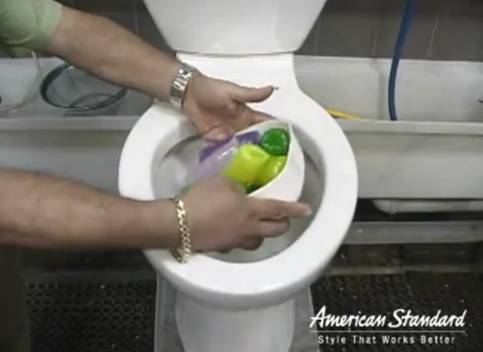 I don’t even know what to call these things, I just know them as a toy that feels distressingly like you’re pulling back lubed up foreskin the more you think about it.  Oh, what’s that?  You’ve never thought about those toys that way, you just thought that it was a cool sensation to feel the membrane slick back the way it does?  Whelp, I’ve just ruined those water toys for you.  Anyway, he flushed down eleven of them for no reason.  Moving on.

“Everyone knows about the size and weight of a hot dog,” the spokesperson says.  We’re entering the part of the video where they clearly just want to flush a bunch of penis-like objects.  Here’s the really baffling part of this whole thing…isn’t five a weirdly specific number to go with?  Like, five hot dogs isn’t that impressive.  It’s not 20 golf balls impressive.  Which leads me to wonder how many toilets the clogged with pork shavings shoved into intestinal casings they had to dismantle before they finally found the magic number of “the amount of hot dogs you can flush without unleashing Cthulhu.”

Also…hot dogs come in packs of ten.  You’ll never individually have just five hot dogs lying around, unless you’ve already used the first five hot dogs from your hot dog pack to flush down the toilet.  So this toilet can only flush half a pack of hot dogs, which is so unimpressive it doesn’t even work as an effective euphemism for taking a dump.  This is might be my least favorite part of the presentation so far, except for the part with the 2002 cell phones, and for the parts where I’m typing so I can’t be drinking at the same time.

Banana Peels From *Inaudible, but I think he said two* Whole Bananas

This one is just baffling.  Two banana peels is neither impressive to flush, nor common.  Off-screen, someone had to peel these two bananas and go “…I mean, what do I do with the bananas now?  Do I…just eat them, or?  I mean, the peels are going to the toilet, but… okay, what I’m trying to ask is, why don’t we just mush up the bananas a little bit inside the peel and flush that?  You realize you paid me like, ten bucks in salary just to peel these two bananas and toss them, right?”   I’m only asking this because I’ve totally been on the receiving end of this, but maybe, just maybe, the director of this video is a woman who recently caught her husband cheating on her, so she took all his shit and all the foods he likes, moved out, and flushed it down the toilet?  I’m just saying, golf balls, cigarettes, hot dogs, that’s totally in play right now.

“Now, This Is A Shame, But I’m Going To Flush Three Sliders Down The Toilet.” 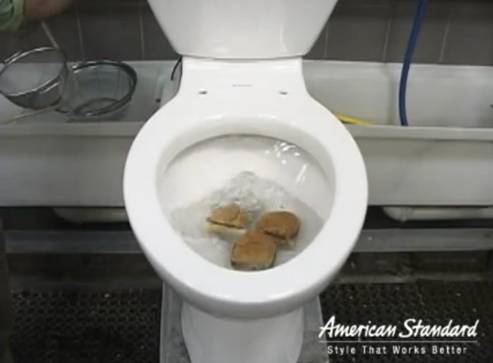 A Pound Of Fresh Orange Peel 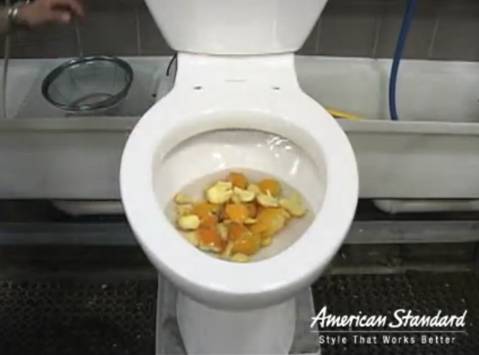 This is actually the grossest looking one so far.  I don’t know what it is about it, maybe the lack of uniformity to the orange peels, maybe it’s that it’s an entire pound of orange peels.  What is it with this video and peels?  Honest question, are our bodies able to digest fruit peels?  And if they can’t, does American Standard just assume we don’t know that oranges and bananas are supposed to be peeled before you eat them?  Like, is this some sort of elaborate, subtle PSA from the fruit industry?  “Remember kids, fruit peels are hard to flush unless you have a super toilet set up in a factory, peel those bananas before eating them?”  Is this part of Michelle Obama’s healthy living campaign that went totally over my head?

No, I stand corrected, this is grosser, this is much much grosser.  This is the grossest thing they’ve shown so far and it’s also the first and only actually acceptable use of this toilet.  Also, again, this is fucking gross.  Moving on. 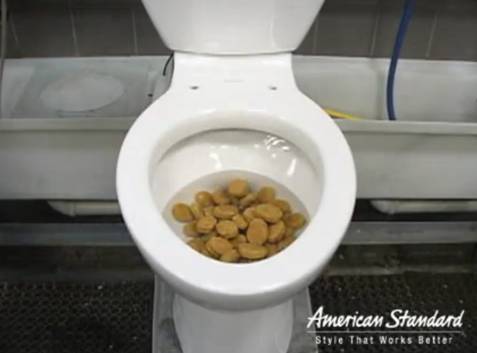 Do you know how disappointed I am that this is their grand finale?  I mean, fifty-six of anything is impressive I guess, but they really diminish everything that could be exciting about this by telling you it’s only two pounds.  Wasn’t half the stuff that they flushed two pounds?  I’m not saying I was expecting a crate full of lit cherry bombs to be tossed down there or anything, but I was absolutely hoping for that.

Oh man.  I’m kind of bummed.  I spent five minutes watching someone flush stupid shit down a toilet, and I’m not really satisfied.  Sigh.  I just, I don’t know, next time can we do “Will It Blend”?  Because Will It Blend never disappoints.

This entry was posted in [REDACTED] and tagged America, American Standard, Redacted, Toilets. Bookmark the permalink.