Ridiculous Drugs That Were Once Medicine: Part One

“Ah, I see you have a nail in your foot.  Some heroin will cure that right up.” 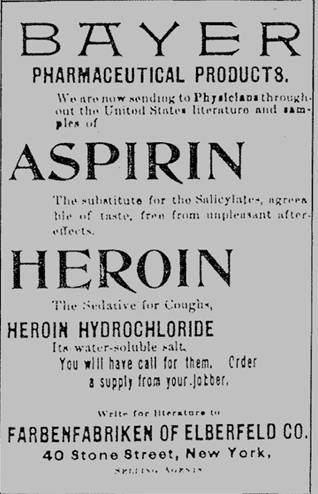 As a rule, the non-crazy members of American society don’t really question what doctors tell us to put in our body, unless the words “Hamster” and “Suppository” are involved.  Got a rusty ticker?  Swallow this white chalky square.  Sinus infection?  Rub some of this nasty smelling ointment on your chest.  You just can’t make the jump from “Utility role player” and “Star slugger” on your professional baseball team?  Just let this guy inject some “Vitamin B12” into your ass cheeks.  It’s called plausible deniability, in case Congress ever asks.

But despite all the weird things we’ll just cram into our bodies without a second of hesitation (“Lupidemitrexeral?  Why, I almost named my daughter that!”) the American pharmaceutical industry spends billions of dollars on development and research to make sure that their medicine won’t turn you into some sort of pig lizard.  And once they hit that perfect, non-mutation-forming treatment of medical ailments, they’ll do us the favor of charging us out the ass for it.  But we can’t fault them for that, hell we’ll applaud them for finding a way to make big bucks even when times are bad by feeding off our addiction to “living.”  Prescription drugs can cost the arm and leg they were meant to treat because they work, and they work better than anything else at our disposal.  Otherwise, those thousands of rabbits and rats died in those laboratories for nothing.

However, in America, things used to be a bit less “controlled” with “procedures in place to make sure you don’t take mercury for medicinal purposes.”  Which was bad for sick people, but absolutely amazing for people who like to laugh at the mistakes of past generations.  Because, come on, are you serious late 19th Century/early 20th Century!? 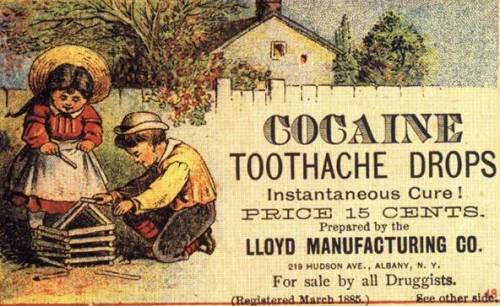 In 1900, cocaine was one of the top five selling pharmaceutical products in the United States, which makes us wonder how America’s culture back then was able to cope with such an influx of cocaine use without the assistance of synthesizers.  Like up here, we have Cocaine Toothache Drops (for children!).  Funny, you’d think this product would just make the teeth itch even more, but who are we to say.  After all, this product is for sale by Druggists!  It apparently was a very effective anesthetic, since it would numb your skin, and was used in eye surgery and dental surgery.  This was a big deal, since effective local anesthesia had not yet been invented- it was basically ether, or nothing, and ether had its risks as far as fatal overdoses were concerned.  And it’s not like anyone has ever overdosed on cocaine, so clearly, clearly, this was a safer bet.

But if Cocaine was only good for toothaches and being able to stay up and keep partying when you’re starting to crash from all the booze, how could other doctors cash in on this Columbian Cash Cow?

Yeah, that’s right, fuck it.  Let’s just mix cocaine with wine, take out the middleman.  This is for the alcoholic on the go that wants to stay up late, but doesn’t want to deal with snorting pesky powders.  Though it’s a bit tough to read at some points, this ad for cocaine-spiked-wine basically uses old timey words that are similar to what the dude in the bathroom of that club is telling you.  “A Pleasant tonic and invigorator”?  We think that translates to, “Man, you’ll be going all night long man, you’ll never want to stop partying!”

One thing we are surprised about is that they claim it’ll help you with, “Neuralgia, sleeplessness, despondency, etc.”  While the first and third seem about right, since we’ve seen enough people with itchy noses who seem to love everyone and everything just a bit too much while going, “WOO!” at inappropriate times, we’d have to question their claim that cocaine helps with sleeplessness.  Doesn’t that imply that this will help you go to bed?  You show us the man who needs cocaine to go to bed, and we’ll point out that Charlie Sheen technically died five years ago. 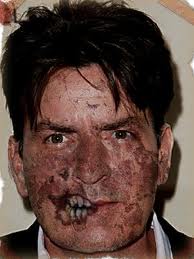 “Ohhh, that makes a lot of sense actually…”

But enough on cocaine, that shit’s illegal, what about stuff that is legal currently?  Just restricted?  We mean, people still use morphine, it’s a very effective painkiller, and can be safe when its doses are moderated and…

Oh…Oh God.  Smoking cigarettes to treat Asthma is like having unprotected sex with hookers to treat syphilis.  You’re probably just going to make the problem worse, and when you tell people your treatment plan, you’re going to get a lot of dumb stares.  And maybe a few offered high fives.  Pro tip: do not accept those high fives, you have no idea where they’ve been.

These cigarettes, which are thankfully “for your heath” are able to treat a series of things that common sense tells us would be made much worse through the use of cigarettes.  Asthma?  Foul breath?  Throat diseases?  Bronchial irritations!? Seriously?  Goddamn it, the past, you were ridiculous.  There’s something to be said about a product called “Dr. Batty’s”.  Was the name “Dr. Batshit Insane’s” already taken?  This would be like buying a product called “Johnny Psycho Snatcher’s Child Safety Kit.”

Although, speaking of children, at least Dr. Batty has the good sense to not recommend children under the age of fucking six smoke these health cigarettes.  That’s some mighty fine parenting, Doc.

But at least we’re not just pouring shit like chloroform down our gullets, right? 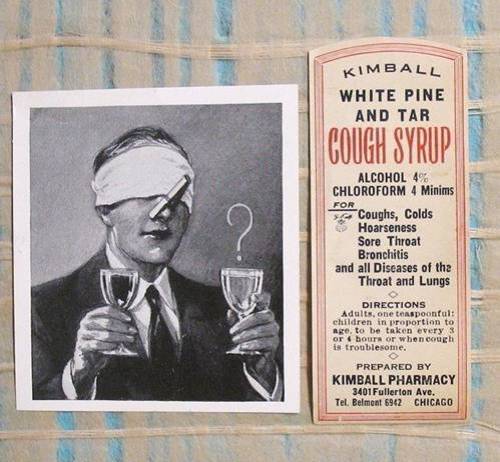 Haaaha, holy shit.  Hey, when we get a cough, we’ll drown that shit in bourbon, so don’t get us wrong, we have absolutely no qualms with this company trying to pass off alcohol as a cough syrup.  But there are so many questions this advertisement brings to mind.  What genius decided to combine chloroform with booze to treat sore throats?  And what Art Director decided on this image for their ad?  What is going on here?  Because this looks like the beginning of a hazing ritual that leads to the police shutting down a fraternity.  On the left, we have what looks to be a dark liquid, so we gotta assume that’s bourbon, which again, you should be using for your cough (unless you can get a hold of a meth-lab’s worth of codeine, in which case, drop us a line).  And the clear glass on the right?  The one with the ominous question mark above it?  The smoke trail of a question that seems to ask, “Is…is this going to kill me?”  That has to be the chloroform, right?  And why is this guy blindfolded with his nose plugged?  Is it so he doesn’t figure out that this company was going to take a picture of them poisoning him so they could sell the craziest idea for a cough syrup ever?

Don’t even try to convince yourself that this image led to anything but death.  That man in that picture died shortly after posing for this picture, and it’s that fucking wine glass of chloroform that did him in.  This place used to be in Chicago, but apparently they’ve since closed, since “murder” doesn’t sell very well when you actively flaunt it.  However, what is now in the space formerly occupied by Kimball Pharmacy? 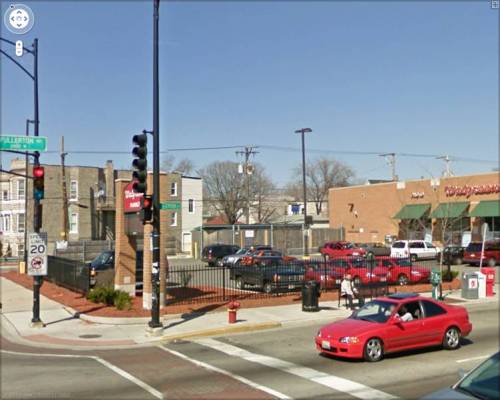 But, hey, these are grown men who are making their own decisions here.  If you want to cure your asthma with cigarettes, go for it!  If you think mixing Alcohol and Chloroform is a good idea, than keep on keeping on, 1990’s era Robert Downey, Jr.  It’s not like they forced dangerous substances on children during the turn of the 20th century… 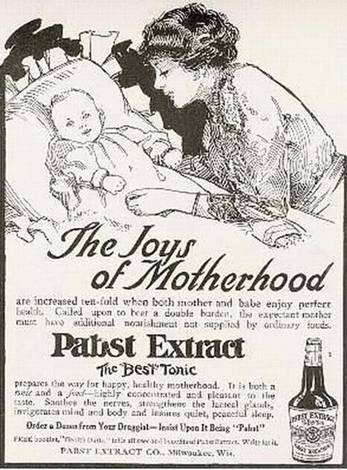 That’s right.  Pabst made a malt liquor to give to babies.  Well, no, that would be insanity, to just make a baby chug PBR like some sort of ironic College Radio Station party.  You see, this is for the mother to take to help her pass out at night, preferably while nursing.  So that way, you can get soused, and your baby can get the benefit of your boozing through your breast milk!  Eureka!

At this point, would it be callous of us to point out that the generation that was raised being breast fed on malt liquor was also the same generation that had to fight in both WWI and WWII?  We’re not saying, we’re just saying…

Want to know about more ways the past tried to destroy our ancestors, Terminator style?  Click HERE for part two in AFFotD’s Ridiculous Drugs That Were Once Medicine series.

2 responses to “Ridiculous Drugs That Were Once Medicine: Part One”