Ridiculous Drugs That Were Once Medicine: Part 2

As AFFotD has previously established through meticulous research, the early 20th century and late 19th century were ridiculous, especially when it came down to dangerous drugs that were legally available as “Medicine.”  Physicians back then treated medicinal treatments the same way a ten year old boy treats a make-your-own stir-fry buffet:  Just throw every ridiculous thing you can find in there and hope something appetizing comes out the other end.  The most common diagnosis back then was, “*shrug* probably?”  Doctors in the 19th century hated their patients so much that when they were told, “Hey, maybe wash your hands before performing surgery on people?” they responded with a resounding, “Fuck you.”  Seriously.

Being sick in the 19th and early 20th century was like being the black person in a horror film.  There’s not much of a chance that you’re making it out alive.  And speaking of horror films, most of the medical instruments back then looked like they’re from scenes of Nightmare on Elm Street that were cut out of the film because they were too terrifying.

Now, despite the high rate of hospital mortalities and genital mutilation (we can only assume), Olde Tyme Doctors did have one thing going for them.  A willingness to use ridiculous drugs as medicine.  That’s why we’re here to show you even more awesomely terrible medicinal ideas from America’s past.

One thing that’s always been in use has been Morphine.  That’s not shocking to see as a medicine- hell, it’s an integral part of pain management for hundreds of thousands of patients every year.  So when you hear about products like Ayer’s Cherry Pectoral or Mrs. Winslow’s Soothing Syrup in the mid 1800’s containing Morphine, you first reaction probably is, “So what?  That actually sounds like they’re just overprescribing Morphine, hell in certain Midwest states that’s just the White Collar equivalent of Meth use- not healthy, but not uncommon either.  It’s not like they’re making these products specifically for children and babies so they can… oh God I think I know where this is going.”

We actually don’t know what’s worse.  The fact that this ad basically is telling you, “Our target demographic is two year old females” or the fact that the children in this picture are clearly stoned.  The one sitting on the floor and stroking the Ayer’s bottle like it’s a goddamn puppy might as well be reciting the lyrics to every Doors song ever written.  This was a cough suppressant/”Cure for lung ailments,” otherwise known as “The most common minor ailments children will suffer from.”

So basically, every kid in the in the mid 19th century was going through life like Brett Favre from 1990 to 1996.  But hey, at least these kids can walk, unlike the users of Mrs. Winslow’s Soothing Syrup. 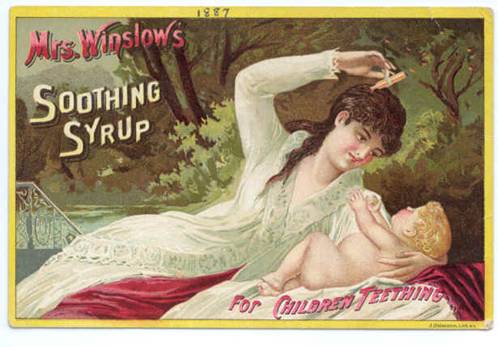 Nothing to see here, nothing to see here.  Just a mother lounging in the woods with her naked baby, taunting the child with a vial of morphine, like some sort of perverted version of peek-a-boo that was discovered in Japan.  We actually feel bad for the Art Director in charge of drawing this, because clearly he had to ask himself the question that no one had ever had to ask themselves before.  “What would a junky baby look like?”  He’s eagerly reaching up for that morphine with an urgency that belies his inability to sit up under his own volition, and his cheeks are far more flushed than any sober baby’s cheeks would ever be.

Then again, when we see the other Mrs. Winslow ad, we stop feeling sorry for the Art Director and just accept that he’s a sick, sick man.

We’re just gonna get this out of the way.  The kid on the left is totally copping a feel.  This image is so unsettlingly incestuous that it just made Woody Allen get a divorce.  And don’t be like “Oh, that’s just where the hand ended up” someone drew this picture and made sure that one hand was being guided by the mother straight to the right breast.  And that’s the money breast.

We get that this is for a (morphine based) product meant to stop children from teething but…but really that just makes it worse.  Also, the kid on the right looks like he’s going to grow up to be the killer in The Girl With the Dragon Tattoo.

But as terrifying as that is, it’s time for us to focus on the real problem.  Straight up opium and heroin being used as medicine.

Maybe we don’t know enough junkies, but we have a hard time believing that this could have been the most effective way to cure colds back in the day.  Yes, we know that this is from a time where mercury was considered a medical ointment, but you’d have to think that if someone came in with a cough, and you injected them with heroin to suppress it, once they slump over in the corner and start sprawling out on the floor, the doctor’s first thought shouldn’t have been, “Well, the cough appears to be gone.”

Back then, medicine was basically like watching an After School Special, only the last ten minutes where the main character discovers the errors of his ways got taped over with just a montage of scenes from Requiem for a Dream.  And for those of you who read the last paragraph and thought, “You’re overreacting, AFFotD, they wouldn’t shoot-up the patients with Opium, just straight up,” what would you say to this? 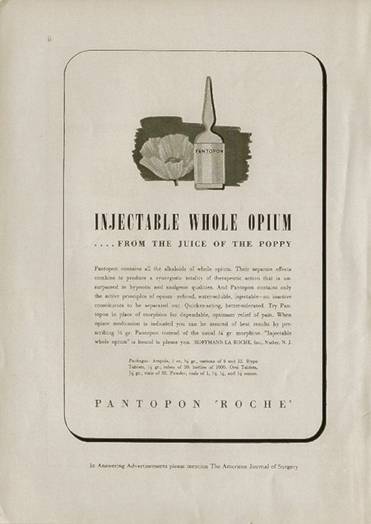 Boom.  Face.  You can tell that the company peddling this medicine knew that Opium was bad for you, so they tried to add a bunch of vague descriptor words to make it sound less like “That drug that crippled China” and more like “A totally not dangerous alternative to Morphine.”  Describing it as being “from the juice of the poppy” makes it sound an Afghani soda more than anything else.  Calling it “Whole” Opium is like calling Ecstasy “Not Entirely Battery Acid.”  Today, when you buy medicine it’s a pill that signifies millions of dollars worth of research, years of testing, and a list of side effects so long it only exists to taunt you for never surpassing a 2nd grade reading level.  They will let you know if there is a one out of one thousand chance that your piss will turn blue, up front.  Yet, back in the 19th century?  They just tossed you a dirty needle, said, “Hey, put some heroin in those veins” and considered that a job well done.

But even with these, they at least have the decency to tell you what ingredients they were using.  Sure, you might not know the side-effects of pouring morphine down your teething baby’s gullet, but at least you knew you were using Morphine.  Because Doctors did not give you that benefit when they were going through their Lewis Carroll phase…

And if you don’t believe that the people responsible for this product had hallucinations where pain was represented by demons, take a gander at another one of their ads. 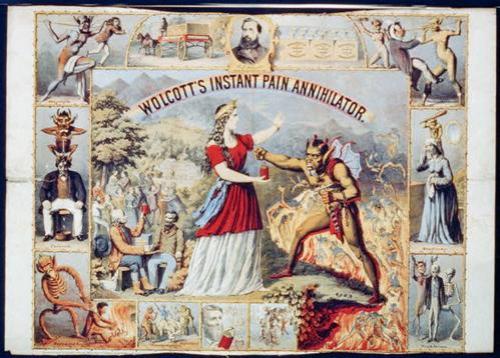 Holy mother of God.  This looks like a collage that Halley Joel Osmond would make in The Sixth Sense.  We’ve got demons skewering children, there’s a nun-looking lady on the right with a tiny demon ready to club her above the head, the left side has a  monster digging into a guy’s head like he’s Ray Liotta in Hannibal, we’re pretty sure that this is what the people at Wolcott’s see all the time.

And we can’t blame them.  Everyone was on so much medicinal Opium, Heroin, and Quaaludes that this is how the world looked to them.  Holy shit.  Things were crazy back then.  That’s all we can get into that, all of these hallucinations are giving us a headache.  We’re going to have to rely on our favorite American medicine.

2 responses to “Ridiculous Drugs That Were Once Medicine: Part 2”