“Actors aren’t as tough as they used to be” sounds like a sentence you’d hear an angry old man shouting from his porch, possibly to children gliding down the sidewalk on Heelys.  But there is some truth to it.  Sure, a lot might have to do with the times we live in, but it’s easy to forget that Hollywood wasn’t always full of glamour and George Clooneys.  The Golden Age of Hollywood was pretty much fueled by animal deaths on set and carefully regimented drug cocktails forced upon strung out teenage actresses off it, and if you managed to pull through that minefield relatively successful and sane, then you had to be made of some pretty solid stuff.

We mention that because while we (correctly) look back at groundbreaking actors such as Charlie Chaplin, John Wayne, and Humphrey Bogart as visionaries and badasses, there’s one actor who probably was the toughest son of a bitch to step in front of a camera (yes, we know that list includes Danny Trejo) if for no other reason than the fact that his childhood, we’re pretty sure, was haunted.  Which probably helped him prepare for the role of Uncle Fester.

END_OF_DOCUMENT_TOKEN_TO_BE_REPLACED

The Most Hilarious Debut Film Appearances of Famous Actors

“Mom, do you want my green stuff?”

~Matt Damon’s Actual First Line of Dialogue in a Film, Ever 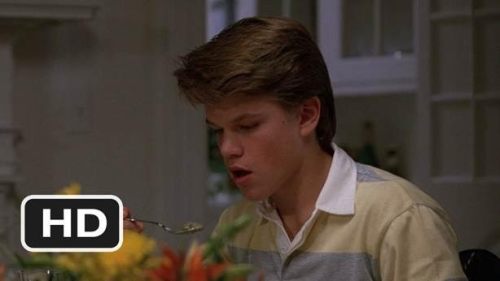 Outside of winning the lottery or having a trust fund, success typically is earned through hard work and dedication.  You have to start from somewhere.  That’s most easily noticeable in the careers of actors, who work their way up to reach stardom and, as a result, tend to have some strange and unusual roles in their early acting days.  For as much as gossip magazine try to emphasize “Stars go grocery shopping, JUST LIKE US!” they’re probably better off demonstrating that sentiment by, say, showing Ben Affleck do a Burger King commercial before he got famous.  Even the actors who seemingly broke out of nowhere had to put in their dues, and that American quality for hard work is something we support, even when we go out of our way to find the most embarrassing early career film choices of famous people in order to poke fun at them.

So let’s find the most embarrassing early career film choices of famous people in order to make fun of them.

The Most Hilarious Debut Film Appearances of Famous Actors

Okay, now that’s just kicking someone when they’re down.