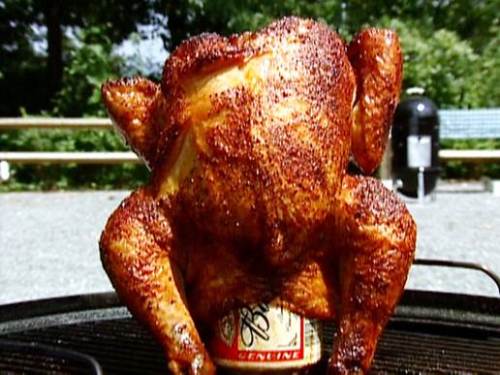 Around these parts, our staff has a potentially unhealthy infatuation with combining two of the most American forms of consumption—eating and drinking—into inventive ways to get drunk without even having to drink anything.  Why do we want to take drinking out of the equation?  We don’t, drinking is wonderful, but we feel that there’s no such thing as too many ways to cram alcohol into your poor decisions, which is why we’re always around to champion such innovations as deep fried alcohol, and also why we’re going to try to be the first people to get hospitalized by eating that new powdered alcohol stuff straight from the box, just the powder.

Now, we’ve previously talked about food being used to make alcohol—specifically, meat beers that are brewed with actual animal meat, because ha ha vegetarians your lifestyle is one that our evolution has actively discouraged.  Now it’s only fitting to go the other direction, and talk about alcohol being used to make food.  All of these meals and desserts exist in America for your consumption, created by heroes who looked at a dinner plate and thought, “You know what?  Let’s get drunk off that, no matter how weird of an idea it might seem.”

There’s a difference between food that uses alcohol as an ingredient, and actual booze-infused dishes.  Yes, you cook with wine and sherry and are fancy and have renter’s insurance, and good for you, but that doesn’t count for shit.  A Guinness and cheese soup is delicious, but will also get you about as drunk as, well, a quarter of a Guinness, which is otherwise known as “having your alcoholic uncle breath in your face.”  Listen we really like that beer as much as anyone but you have to admit it’s pretty tame in the alcohol department.

So you can talk about your rum balls (heh) all you want, but those aren’t going to make the cut for us.  We want something truly alcoholic, to the point that you have to have your ID checked just to eat it.  While we definitely need more chefs thinking of ways to meet this criteria, as booze-food is still pretty rare, we still managed to find the following boozy, delicious, and honestly kind of weird solid food items to enhance your buzz.

This is the least surprising or strange item on the list, but it’s still potent enough to get you drunk, and who are you to nitpick over your solid-form-alcohol?  Either way, an Atlanta popsicle peddler (popsicle pusher?) by the name of Steven Carse, who goes by the name King of Pops, decided that homemade frozen treats are all well and good, but can they get you drunk?  The answer is, well, yeah, it doesn’t seem like that much of a stretch to just make a cocktail and freeze it onto a stick, that’s pretty much just a Jell-O shot for adults.  That said, starting in 2012, the King of Pops did decide to sell, for $5 a pop(sicle), boozy flavors such as a Loaded Arnold Palmer, Strawberry Margarita, and The Bourbon Cowboy (which is a bourbon and orange juice drink).  The popsicles were available at four Corner Tavern locations in Atlanta, but the idea behind it should be enough to result in hundreds of poorly photographed Pinterest pages of your own attempts to recreate this during the summer.  Not that we’d try to stop you.  If you’re still putting water, instead of sugary alcohol, into your freezer, you’ve clearly learned nothing from us. 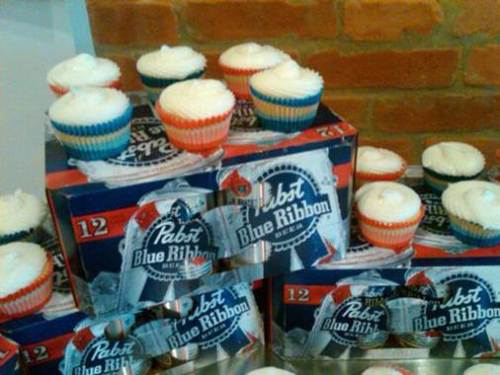 First of all, we love the name here.  There are several entrepreneurs making alcoholic cupcakes, but we decided to just focus on the Washington D.C. bakery, Crunkcakes, because, well, they’re called Crunkcakes.  If we have to explain that to you, you don’t deserve to have it explained to.  These cupcakes don’t skimp on the booze, however—each one contains about a full shot of liquor, with less of a chance of making you gag, and more of a chance of inevitably leading to a really bad, horrific puke.  They have seasonal flavors, but always will provide such flavors as the Mind Eraser No Chaser, which features Kahlua and vanilla vodka, the Fluffanut, made with Smirnoff’s marshmallow vodka as well as their caramel flavor, and Boozy Breakfast, which has both bacon and maple whiskey.  Like the popsicles, these cupcakes are largely available at various bars throughout the city as opposed to one dedicated bakery (probably because if they had a storefront they’d also need a liquor license just to sell food), and also like the popsicles, we’d have to imagine that many of you that actually make cupcakes have decided to add whiskey to their next batch because, fuck, it apparently works, right?  Do not fight that impulse. 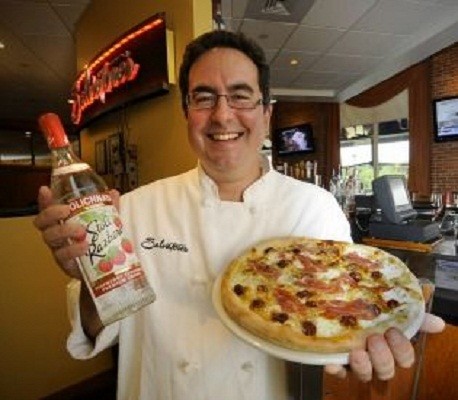 Now we’re getting into the meat of things.  Dammit, one of the later entries is actually meat, we should have saved that pun for then.  Anyway, here comes the kind of alcohol-infused dishes that actively surprise you.  You saw popsicles and thought, “sure,” and you saw cupcakes and thought, “well that’s more alcoholic than I would have wagered, but cool.”  But this for-21-and-over pizza, made by the Boston-area pizza chain Salvatore’s in 2012, surprisingly wasn’t created as a gag, but rather as a practical approach to solve a problem they were having putting dried cherries on their pizza in a way other than “just not putting dried cherries on your pizza, you dingus.”

Victor Paone, the corporate chef of Salvatore’s, was trying to make a Vignola Cherry Pizza, which was topped with mozzarella, Gorgonzola, prosciutto, orange blossom honey, and Italian cherries.  Admittedly, we’re not a big fan of putting random sweet ingredients on a pizza that should have stopped after “two cheeses and prosciutto”  but that’s neither here nor there.  The cherries were dried, and too tough to be very good on the pizza, so Paone decided to try to rehydrate them by soaking them in raspberry vodka, which is the first damn thing that’s made sense about this pizza yet.  The booze-soaked cherries gave so much of an alcoholic kick that it legally couldn’t be served to minors, but instead of going back to the drawing board and, again, not using dried cherries on a pizza, they decided to roll with it, embracing the concept of being one of America’s first purveyors of alcoholic pizza.

And it’s still on the menu, age restriction and everything, today, if you happen to be in the Boston area and looking for a little buzz with your ‘za.  You know, if you’re one of those weirdos that wants cherries on their pie. 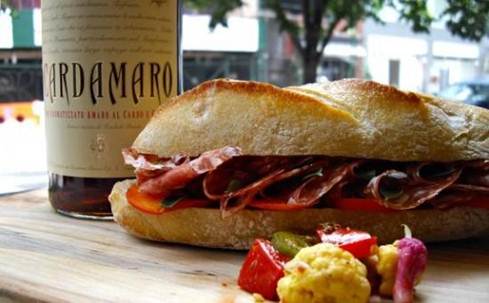 Salumè, a New York sandwich shop which has unfortunately since closed its doors, was a trailblazer that left before its time.  Now, admittedly, they charged $18 for their Surryano panini, made with Bulliet Rye-soaked prosciutto, Asiago d’Allevo (or, “fancy cheese” when translated to American), fig mustard, and peppermint, but you know, this is New York, the one city in America that can get away with charging $18 for a sandwich without even having to put booze on it.  The process of getting the alcohol onto the sandwich was revolutionary.  Or, by revolutionary, we mean, pretty dumbly simple—they just took a medicine dropper and added booze to the meat once they put it on the bread.  Hell, we could do that at home.  Okay, to be fair, we usually do that at home, but it’s less “meticulously add the right amount of bourbon for flavor with a medicine dropper” and more “oh shit, I dropped my sandwich into my whiskey, well fuck it I’m not letting this go to waste.”

Salumè also offered a prosciutto, beets and scotch sandwich, as well as a crudo prosciutto and gin sandwich, which basically tells us that you can apparently dunk prosciutto in any kind of liquor and have it be “good enough.”  Do not take this as an invitation to start buying up prosciutto and dunking it in your booze, however, ‘cause that shit is expensive.  Again.  Eighteen dollar sandwich. 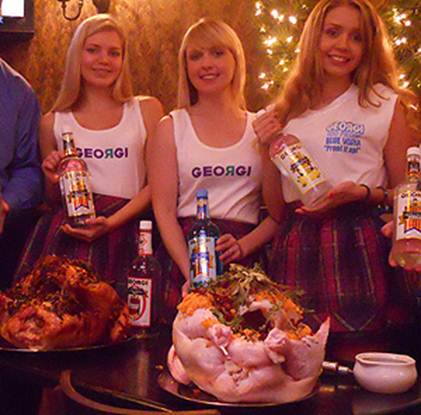 Apparently New York is the only place that really commits to the “weird alcoholic food” gimmick, and the here we see the best alcoholic food idea yet—alcoholic Thanksgiving turkey.  First tested out in 2009, and expanded in 2010 in a partnership between Georgi vodka (as seen being showcased by the three dead-eyed model spokeswomen in the picture above) and the United Restaurant Association teamed up to provide what they call a 100-proof turkey to be served at a handful of taverns throughout New York.  The turkey was made by infusing it over three days with five different flavors of vodka (peach, apple, cherry, orange, and lemon, if you’re curious and also wondering why, why they decided to make a flavored-vodka-suicide the infusion liquor of choice).  The turkey was then served with a gravy that contains a 100-proof vodka in case you wanted a reminder that the best decisions you make usually are kind of shitty at the same time.

This is naturally a step in the right direction, we just need to take it even farther.  We dream of a day where grocery stores and butcher shops have an alcoholic and non-alcoholic meats section.  An age when “eating your vegetables” comes with options like “rum-carrots” or “tequila-lettuce.”  We have a dream, and that is for suspicious drivers to be pulled over and immediately asked, “So, how much did you have to eat tonight, Mr. Sheen?”

Come on America, embrace the alcoholic meal!  We will lead the charge!  To drunkenness!  And glory!