“Wait, you mean life ISN’T supposed to be like a Michael Bay film?”

On April 5th, 1970, two career criminals named Bobby Davis and Jack Twinning were planning on using explosives to rob an armored car in California, since action movies had yet to catch up to real life at this point.  On the way to steal these explosives, Davis decided to performed an ill-advised U-turn, cutting off a military serviceman who he then threatened by brandishing a gun before fleeing when the serviceman told him that officers from the California Highway Patrol were in the area.  They weren’t, but they would be, since the serviceman immediately went to a payphone (before cell phones we used to call people by, you know what, no time to explain, just roll with it) to actually get the police there to track down the crazy dude brandishing a gun on the highway.  This little bit of road rage eventually lead to the Newhall massacre, a tragic event that took the lives of four young CHP officers, which at the time was the deadliest day in the history of California law enforcement, and lead to drastic overhauls in the way police officers are kept safe in this country.

We could talk about the Newhall massacre specifically, because it’s a very intense story, but it’s also a bummer to focus in on that, so instead we’re going to take a moment to tell you about the Newhall massacre through the eyes of Gary Kness, the 31-year-old former Marine who happened to drive past the shootout and think, “You know what, this is something I should probably stick my nose in.”  While it was a day that was filled with tremendous sacrifice (God, we’re going to have a hard time tossing in jokes about this without feeling like dicks) Gary Kness proves the American spirit of just, straight up not giving a fuck when it comes to putting punks in their damn place.

So with a lot of hemming and hawing, we present to you…

We can’t tell Kness’ story without talking about the total unrealistic action film scene that took place on April 5th, so here is what happened during the Newhall massacre.  Once the police were made aware that some U-turning asshole was waving guns in people’s faces, it took only several minutes for a squad car to spot the asshole in question.  CHP officers Walt Frago and Roger Gore began following the car, eventually getting them to pull into a restaurant parking lot to apprehend the suspects, slash, crazy dicknozzles.  The officers approached the car without issue, and Davis initially obeyed the officers’ requests by getting out of the car.  Unfortunately, at this point, Twinning popped out of the passenger side, ambushing and killing Frago.  Gore, Frago’s partner, fired a shot towards Twinning, moving his attention from Davis, who pulled out a gun from his waistband and killed the officer.

Shortly after, a backup unit, consisting of James Pence and George Alleyn showed up, where they immediately took fire.  The best way to describe it, which we heard from one of the responding officers in this 2009 video, was that the two “lost the gun battle.”  Alleyn was shot and fatally injured by several shotgun rounds while Pence sustained an injury and kept fighting.  He eventually was killed by Twinning, who ran up and shot the patrolman while he was reloading his pistol (at the time, officers had to reload their guns manually, which clearly is not the standard practice anymore).

Okay.  So yeah, four police officers, aged between 23 and 24, were killed by two fuckwads.  That’s the main story of the Newhall massacre.  Eventually Davis and Twinning fled.  Davis was caught after exchanging gunfire with the owner of a camper (because apparently everyone in California has a fucking gun) and stealing the camper, which tracked down by police.  He was sentenced to the death penalty, which was commuted to life in prison, and he eventually committed suicide in his jail cell in 2009.  Twinning went out a bit more dickishly—breaking into a house and holding the family there hostage.  After a standoff, he released the hostages, and killed himself when police stormed the building. 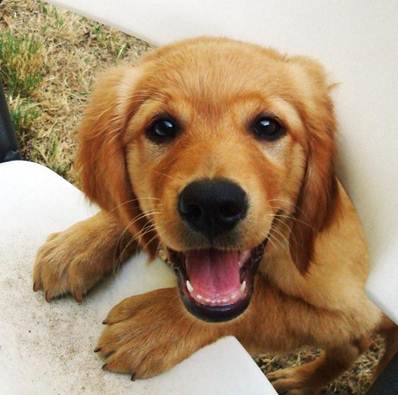 As always, we at affotd.com are contractually obligated to follow up any 3 paragraph segment describing six deaths and zero jokes with a picture of a puppy, in order to remind you, who’s a good boy?  Yes you are, you are a good boy, look at that face, oh that’s a good boy.

Anyway, where does a kind of cool story about a badass American going out of his way to completely subvert the definition of “bystander” come into play?  Well, Gary Kness was driving to work, as many of you do every day, where he came across a fucking shootout, which holy shit if you’ve had that happened email us and tell us your story.  Now, Gary Kness was a former marine, so he had some knowledge on how to handle himself when things got hairy.  He also had massive testicles made out of an advanced steel-alloy that still has yet to be duplicated by modern scientists, so when he came across this insane firefight, his first reaction was, and this is a quote, “It was a movie.  But, didn’t take but a minute to realize this is real gunfire.”

He could see two officers exchanging fire towards a red Pontiac when he saw George Alleyn go down with his injuries.  Quoting Kness, “I could tell he got hit, ‘cause he reacted, and fell out from behind the car.  And then I could see an individual still shooting at him.  I jumped out of my car, ran up, trying to grab him and pull him back underneath the patrol car.”  Now, keep this in mind—there are members of our staff who have literally not used the bathroom for a full day because they saw a centipede in the shower and they weren’t sure if the shoe they threw at it killed it or not.  Meanwhile, Gary Kness saw a cop get shot by heavily armed criminals from the relative safety of his car and said, “Welp, someone’s gonna have to drag this guy to safety, might as well be me.”

“Mr. Kness, why did you enter that burning building again?”

Well, I didn’t have anything else to do, and some feller told me he left his cell phone in there.

He wasn’t able to move Alleyn, but saw Davis take aim at him, and wisely decided to duck behind the squad car before slightly less wisely, but far more awesomely, deciding to give this motherfucker a taste of what’s what.  In his own words, “The shotgun was right there.  I picked it up, raised it over the trunk, click, it was empty.  I pumped it, click again.  I duck down behind the patrol car, at this point I saw the service revolver.  I grabbed it up, came into a two-handed combat position, and I cocked it.  The individual was just a few feet in front of the patrol car, and I cranked off a round.  He spun around, and I clicked it again but it was just empty.”  In most accounts, Kness says that there were actually three or four rounds left in the gun that he fired, but we like the version where Gary Kness winged this motherfucker with his one try—it would turn out that he hit the car, and that a fragment of the bullet ricocheted and hit Davis in the lung, which was enough to hurt like a son of a bitch, but not enough to slow him down too much.

Now, at this point we feel like we haven’t made enough of an effort to stress this point, so allow us to be blunt.  This guy, who was driving to work as a computer operator (a computer operator!), saw a police shootout, watched a police officer fucking get shot to death, and decided to pick up the fallen officer’s guns and start shooting at the heavily armed criminals on the street.  This is someone who was actively on the way to work.  This is person who later that day had to say to a person who provides him paychecks, “Listen, sorry I was late, but you would not believe the day I’ve had.”  That is the kind of thing that we would roll our eyes about if we saw it in a movie because no way would that happen in real life, except it fucking happened in real life, because Gary Kness is a badass and Americans are a wonderful blend of batshit crazy and awesome. 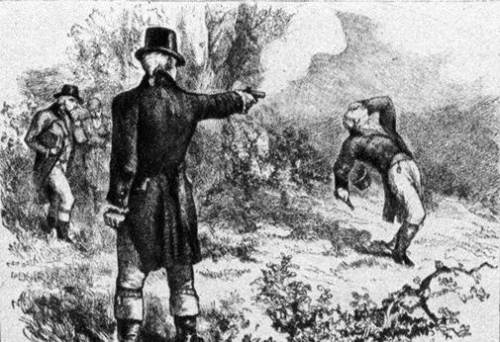 To be fair, what would you expect from the country that put this dude on the $20 bill?

Around this time, Kness saw Twilling shoot Pence, saw his gun had no ammo, and heard approaching sirens of backup units and rightfully thought, “Well I’ve done what I can here, time to get the fuck out of the direct path of bullets.”  That’s not a direct quotation, but the following is—“The assailant just [said] ‘I got you now you dumb SOB’ and cranked it right into his [Pence’s] head.  I could hear sirens, and I could see headlights and red lights flashing coming off the freeway and down the old road, and I ran not maybe ten steps or so into a drainage ditch.”

Davis and Twinning soon fled, possibly because they didn’t actually have a death wish (or at least the death wish still needed a few hours to set in) or a desire for a full on firefight with the entire CHP, or, maybe, just maybe, they suddenly realized they couldn’t see where Gary Kness was and holy shit what if he’s about to Rambo their asses!?  That guy came out of nowhere man, where did he fucking go?  Let’s fucking, shit, just run, let’s get out of here!

Now, Gary Kness had done what he could in the situation, but with the suspects having fled, four dead policemen on the ground, and backup roaring in, he was stuck in an “oh shit I know how this looks” situation.  As Kness says, “I’m staring down the barrel of a shotgun.  That’s when I really start to get nervous and upset.  I’m blood covered, and I still had the service revolver, I don’t know why but I had kept it [and I was worried that] they would think I was one of these…weirdos.”  Now, he made a point to keep the gun that he was clutching onto held to his side and relatively out of view while shouting out the direction the suspects went, and let the police handle the rest of the manhunt.  He ended up being the star witness for the prosecution in the trial against Bobby Davis, since it’s harder to do better than, “Yes, sir, that’s the man I shot while he was shooting at a bunch of cops” when you’re looking for a slam dunk conviction.  Hilariously (well, to us) when Davis was in the police station and saw Kness, he demanded that the computer operator be arrested for shooting him, because the stereotype of criminals being stupid assholes holds true more often than false.

Gary Kness, now 76, currently resides in Palmdale, California, about 30 miles from Newhall.  In 2005 he received an award from the California Highway Patrol honoring his heroics—at the time he was working as a driving instructor.  We can only imagine what he’s doing now, but considering how rarely you hear reports about California Highway Patrol shootings, we’ll just assume he’s been applying his own brand of vigilante justice to all the punks and weirdos even thinking of trying any funny business.  Not on his roads, goddamn it.

This entry was posted in Fighters, The Best of the Rest and tagged America, Badass, Bystandard, Gary Kness, Newhall massacre, robbery. Bookmark the permalink.