The American History of the Pop-Tart

“Pop Tarts: The Perfect Breakfast For A Broken Home!” 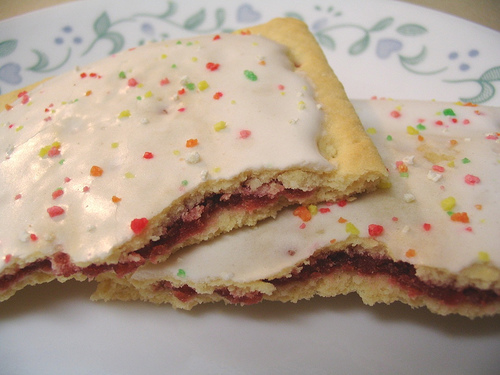 Parenting is not easy, which is why American corporations have entire divisions dedicated to giving parents as many moments of unencumbered sanity as humanly possible.  Sure, we made Sesame Street as a fun way to entertain kids while educating them, but we also want to give parents thirty minutes of peace where they could plop the kids in front of the TV and talk about maybe getting a fast quickie done in the laundry room before ultimately deciding that they’d both rather just take a 10 minute nap.  It’s the same reason why the iPad went from a frankly unnecessary gadget to a must-have child distraction device for new parents, and it’s also why Uncrustables exist as an easy way to tell your child you don’t really love them that much.

But of all the areas where American corporations try to make life easier for the struggling parent, there is one breakfast treat that’s been jazzing kids and adults up on unnecessarily high amounts of sugar morning in and morning out in a quest to make at least the beginning of the day a shade easier while you try to hide the fact that you’re a bit hungover to your kids who just won’t stop asking why you’re holding your head in those shrill monster little voices of theirs.

That product, of course, is the Pop-Tart.  More American than the apple pie, because we invented it, and we use it to cut corners.

The American History of the Pop-Tart

The Kellogg Company first released the Pop-Tart in 1964.  For those of you wondering what parenting looked like before you could toss a pastry in a toaster for three minutes and send your kids off to school with a sugar rush, well, we’d say you should just watch the early seasons of Mad Men.  It wasn’t pretty.  Pop-Tarts changed American parenting for the better!  Probably.  Probably not.  But they did make breakfast easier and better, and have been doing so ever since with no sign of slowing down—in fact, sales for Pop-Tarts have been increasing every year for the past 32 years as of 2014.  Pretty much the only other product with that kind of success record is pornography and maybe butter.

Kellogg’s competitor, Post, was the first to try to get in on the toaster-prepared breakfast market.  They realized that their method for enclosing food in foil to keep it fresh (which they first used to make dog food, because progress often takes the road less traveled) could be used to make this a reality, so they announced their plans to make “Country Squares” in 1963, before they had a product to sell.  The folks at Kellogg, being savvy businessmen, which is another word for “technically in the clear, but still kind of dickish,” jumped in on this action, developing their own version in just six months.  Thus, in 1964, the first non-frosted Pop-Tart hit the market, where it was so popular Kellogg initially had difficulty producing enough to meet demand. 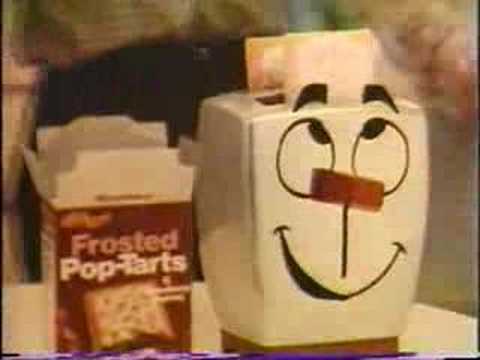 All this despite the fact that their original mascot was Milton, the bashful monster.

By 1967, they realized that they could put hard frosting on there that wouldn’t melt in the heat of the toaster, which got us real Pop-Tarts.  Originally coming out in four different flavors (blueberry, strawberry, brown sugar cinnamon, and apple currant) Pop-Tarts now boast over 25 flavors, not including the various “limited edition” flavors that are released each year.  And no, none of the flavors around are called apple currant anymore, because that’s a dumb flavor for a Pop-Tart.  The Pop-Tart itself is brilliant in its simplicity, as well as it’s deliciousness.  It doesn’t need to be frozen or refrigerated, tastes pretty good on its own, but when heated in a toaster for about three minutes becomes a wonderful piping-hot way to burn your mouth but not really mind at the end of the day.

America makes over a billion Pop-Tarts every year, making it the most popular product Kellogg sells, making it, by our calculations, more widely consumed than actual cereal.  In 2001, the US military airdropped 2.4 million Pop-Tarts into Afghanistan during our initial invasion, which is a sentence we didn’t feel like giving a proper transition because honestly we just wanted to point that fact out, and it could go anywhere in this article.  The frosted treat is engrained in our cultural DNA, and we can guarantee that almost everyone reading this article who hasn’t had a Pop-Tart within the past four years just got a sudden urge to get buy a box of strawberry Pop-Tarts, opening up one of the two-per-foil offerings, and eating one cold and one warm.  We’ve been there.  Every American has been there. 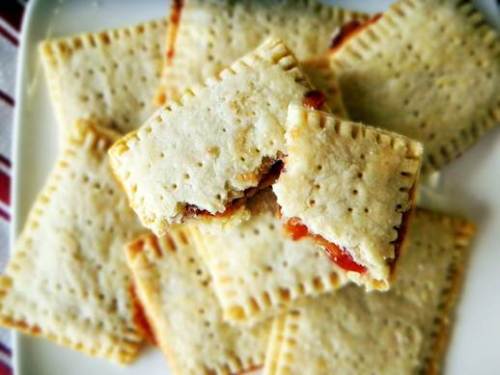 The main competition to the Pop-Tart is the Toaster Strudel, which was launched in 1985, and will forever be the fancier, more dignified breakfast pastry that will never be as popular.  Sort of like the Niles Crane of the toaster pastry world.  Toaster Strudels are good, sure, but they can’t hold a candle to Pop-Tarts—they’re a different texture, you have to manually apply the frosting yourself, like some sort of peasant, and they have to be refrigerated, which immediately disqualifies them as post-nuclear-war treats.  When’s the last time you’ve ever heard someone ask if their Pop-Tart was safe to eat because they left it out for an hour and a half?  Well, okay, there was that one time, but Uncle John was just having a mild stroke, he also said ostrich eggs are made of vulva and that Portuguese women eat the most ham.  It was pure nonsense, and next time you should take him to the hospital the moment he says that your Pop-Tart smells like buttered toast, because that is not how Pop-Tarts smell, goddamn it.

Yes, the reason why Pop-Tarts are an ingrained part of our culture, and Toaster Strudels’ only day in the sun came from the fact that Gretchen Weiner’s father invented them in Mean Girls, stems from Pop-Tarts versatility as well as its deliciousness.  We can’t discount the deliciousness—originally the filling was Smuckers jam, and they’ve still kept the general jam-like quality of the inside, while maintaining a proper pastry-to-sugary-gel ratio to be delicious for kids and adults alike.  And the frosting is so good that if you told us it was made out of cocaine and ground up spiders, we would just shrug our shoulders and say, “Whelp, I guess I really like cocaine and ground up spiders, then.”  But deliciousness aside, the fact that these can be left out for extended periods of time and still consumed years later is nothing short of magic, and the fact that most Americans have an actually informed opinion on if it tastes better raw or cooked without having encountered any sort of bread parasites is a testament to America’s dedication to lazy food preparation techniques. 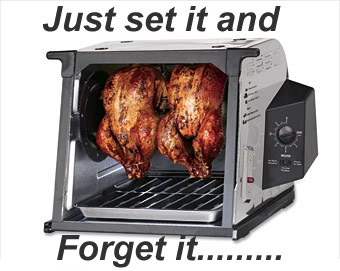 This is, of course, the land that invented the Showtime Rotisserie & BBQ

Next time you sit down for a breakfast only to realize, oh shit, you were supposed to be at work thirty minutes ago, you’ve really got to stop going so hard on a Monday night this was cute a few years ago but now it’s becoming actively difficult to maintain, and you glance over to your pantry to see your carbohydrate laden savior in the form of an on-the-go Pop-Tart, take a moment to thank America for looking out for you in your breakfast time of need.  Or thank the Kellogg’s product development team that worked overtime to kick Post Country Squares right in the balls and steal their thunder.  Either way, you’ve got a delicious meal that only exists because of the U. S. of A.