“If Benjamin were an ice cream flavor, he’d be pralines and dick.”

Every summer American childhood memory revolves around delicious treats that cool you down while giving you a hell of a sugar rush.  “You scream, I scream, we all scream for…” we all would shout in our formative years to have it interrupted by our father’s saying, “Shut up with your damn singing and get your father another fucking beer.  Oh Jesus, you’re crying again?  Man the fuck up, here, take this five dollar bill and get something from the ice cream truck, maybe that’ll get you out of my goddamn hair for one fucking minute.”  Ah, memories.

Here’s a fun test for you Americans at reading at home (or at work ) (or while pooping, whatever, we don’t judge).  Go to ten strangers and ask if they like ice cream.  You will probably get six people saying, “Um, yeah?” three people saying, “Who the fuck are you” and one person who goes, “No I do not like ice cream.”  Well congratulations, you’ve found the parasite, the host is dead, there’s nothing for you to do but to set him on fire and contain the pathogen.  So, 9 out of 9 Americans love ice cream, meaning that ice cream is infallible, much like pizza or Oreos.

Oh what’s that?  You clicked the above links and saw that it lead to gross examples of those aforementioned delicious treats?  Oh, you didn’t click on them because that seemed time consuming and you’re just skimming through this anyway?  Shut up, just, okay?  Just pretend you did.  Anyway, we’re going to talk about Americans that fuck up ice cream.

It’s no secret that gross ice cream flavors exist out there, and we largely have Japan to blame.  And sure, you’re not going to find anything as insane as foie gras and caviar ice cream outside of France.  But that doesn’t mean that we’ve not overstepped our bounds in the category of frozen dairy product flavors.  While none of the following flavors are common enough to even break through the ranks of Baskin-Robbin’s 36 flavors, they are common enough to, well, exist as a sin against American desserts everywhere.

Anyway, below are a list of ten ice cream flavors available in America that you’d better not even fucking think about putting near a slice of apple pie.

Some of you might be unfamiliar with the giant, spikey fruit that’s most popular in southeast Asia, and we don’t blame you, since if we had the ability to go through life without knowing about the existence of a giant fruit that smells like “rotten onions, turpentine, and raw sewage” we’d be happier in our day-to-day lives, and probably would drink less.  Some people think that the so called “King of fruits” is a nuanced delicacy, but then again some people think that the Boston marathon bomber would make a good boyfriend, so we should probably take any opinion that anyone has ever had with a grain of salt.  When you have a fruit that is so pungent that it’s actively banned from various southeast Asian hotels, it’s probably not a great idea to combine it with milk and turn it into a frozen dessert for general consumption.

Yet here we have Chinatown Ice Cream Factory in New York, offering durian (with the helpful addition of “stinky fruit” listed under it on the menu, just so you know what you’re getting yourself into) as one of their “regular” flavors.  They do sell “exotic” flavors too, and if durian is considered normal, wait till you see what kind of crazy shit they come up with for their exotic flavors.  Such as, chocolate, chocolate chip, coffee, strawberry…wait, are you fucking serious, Chinatown Ice Cream Factory?

Okay, that’s it, this is clearly the ice cream company of crazy people.  Enjoy your stinky rotting fruit, you insane bastards.

Ice cream is typically sweet.  This isn’t a radical concept—it’s a dessert with a shit-ton of sugar, which is why the main flavors you get tend to be sweet things like chocolate or strawberry or, fuck it all, Nutella.   When we sit down to a nice bowl of vanilla ice cream because we’re in some hypothetical dimension where we lack any sense of adventure of innovation, we never think to ourselves, you know what, this sugary milky substance is delicious, but it could really use some garlic because we want to ward away vampires and it’s not like we have to worry about kissing anyone in the near future if we’re the kind of person who makes life choices like putting garlic on top of ice cream.

But yet, somehow,  of all the items on this list, Garlic flavored ice cream not only has its own Wikipedia page, but there’s a goddamn Garlic Festival that serves it every year.  Because of course there is.

Mashed potatoes sort of look like ice cream, right?  So why not combine the two!  That crazy person logic comes to us courtesy of the folks responsible for shilling Idaho potatoes, who managed to take enough of a break from howling the pain of a thousand lies to sit down and create a recipe for grilled potato ice cream, which appears to be a standard ice cream recipe, only with potato skins added in order to give just a hint of potato flavor as the perfect way to remind you, “Oh god, dumping sugar and eggs on a baked potato sounds objectively awful, why am I doing this to myself, I went through all the effort to make ice cream in my home, and I put potatoes in there instead of strawberries or really any other ingredient that doesn’t lead to an existential crisis of faith where I wonder what kind of God would allow for this flavor combination to exist.”

And then you shovel the mush into your mouth with a blank expression on your face.  And when you finish, you look at your empty bowl, mutter, “I’m so sorry,” and weep. 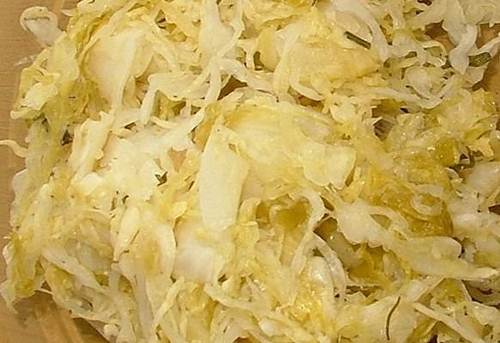 We couldn’t find a good enough picture of actual sauerkraut ice cream, so we just wanted to show you a bunch of sauerkraut to remind you what it is, and to give your brain time to register the terror at the thought of turning that into an iced cream dessert.  This is fermented cabbage.  That is sour.  Because it’s filled with lactic acid.  And then someone turned that shit into ice cream on at least one occasion.  In the 2000 Sauerkraut, 25 gallons of sauerkraut ice cream was made, of which 23 were sold.   On one hand, thank God they didn’t sell out, because we were given a talisman by a mysterious gypsy a bit ago, and “25 gallons of foul, fermented cabbage ice cream sells out” was one of the impending signs of the Apocalypse, but on the other hand, come on y’all, are you serious?  How the hell did 23 people over the course of a day come to the decision to buy a gallon of sauerkraut ice cream to take home?  Had they just run out of their favorite ice cream flavor, which we can only assume to be used needles and Band-Aids?  The fuck is wrong with you guys?

And yes, there are recipes online to make this flavor of ice cream yourselves.  We’re beginning to think, with all the “make it at home” awful ice cream recipes out there, we might need to start restricting the sale of ice cream makers.  It’s too much power for some people to handle, clearly.

Goddamn it, no.  We’re not going to entertain the concept of buttered popcorn in ice cream form—we still live in a society where wrong-headed people actually try to convince the world of the lie that buttered popcorn Jelly Belly are delicious.  They are not delicious.  They taste like sugar mixed with butter and sadness and the taste takes three days to leave your mouth, and why would you make that even worse by taking that flavor and presenting it in a form that can give you brain freeze?

No.  You go to hell, buttered popcorn flavored ice cream.

This doesn’t infuriate us, or even necessarily seem objectively “bad” it just seems…well, pointless.  Available at The Bent Spoon in Princeton, New Jersey, the flavor seems inoffensive enough, but do you really need ice cream flavors made out of random leafy herbs?   We’ll begrudgingly say that this is the one item on this list that we’d at least try without feeling badly about ourselves, but come on guys.  Cool it with the savory ice cream flavors. 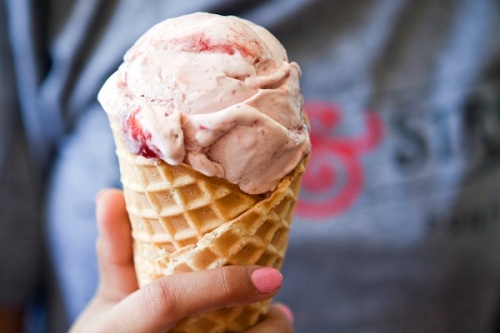 Oh mother of God.  Yes, this is a real flavor. Salt & Straw, with three locations in Portland, Oregon, made the common mistake of conflating “interesting, unusual, exciting” flavors with “putting bone marrow into ice cream like some sort of fucking monster” and gave us this terrifying treat.  Bone.  Marrow.  And smoked cherries.  The company boasts high butterfat content and low sweetness levels, in order to “let the flavors shine through” which means that this ice cream tastes even more like bone marrow than you initially imagined.

Look at it.  Look at what you did, Portland.  Now say you’re sorry.  We didn’t deserve this. 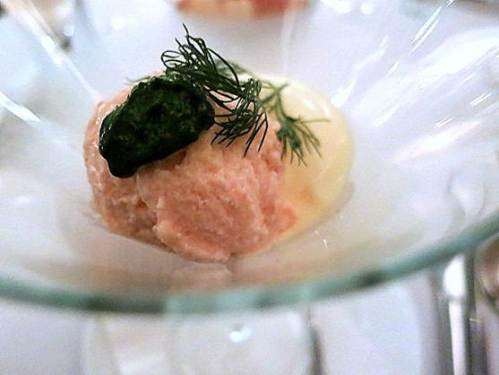 See, that right there is some Japan shit.  Fish was not meant to be pulverized and turned into ice cream, not on American soil goddamn it.  Someone forgot to mention that to Max & Mina’s in Flushing, New York, because lo and behold they’ve made an ice cream that tastes like “a bunch of lox in vanilla ice cream.”  That’s great, that’s just fucking great, because when you see a bowl of ice cream, your first thought is to smother it with as much smoked salmon as you can get your hands on.  We’re deep in the madness at this point, people.  There’s no turning back.

Now this is just cruel.  We love lobster, immortal sea demons that they are, and this probably one of the greatest injustices we’ve seen the culinary treat face.  Ben & Bill’s Chocolate Emporium, based out in Maine, takes a buttered-flavored ice cream, which, strike one, and folds in pounds of chopped and buttered lobster meat into the ice cream, which, strike two, three, four, five, and so on.  Now, we’re just getting sad.

We’re less astonished and saddened by the fact that someone made the decision to take perfectly good cheese and ruin it by trying to turn it into a frozen sugary dessert than we are with the fact that there are multiple cheese ice cream recipes to choose from, be it blue cheese or cheddar or Parmesan.   While cheese at least is dairy much like, you know, cream is, outside of goat cheese (which actually makes a very good ice cream, since goat cheese is delicious when mixed with sweet things) the whole concept of taking cheddar cheese (or blue cheese or what have you) and turning it into an ice cream dish still leaves us unsettled, sort of like trying to convince yourself that the terrorist’s daughter on 24: Live Another Dayis hot while looking into her Chucky Doll eyes.  You can try all you can to convince us that it’s good, but we’re still going to look at these ice creams as soulless experiments gone horribly wrong.

So let’s just, ignore these foolish forays into “interesting” ice cream, and just stick with what works.  Peanut butter cups.  Rocky road.  Most anything by Ben & Jerry’s.  Take advantage of your summer by consuming as much frozen cream as you can, just, you know, try to avoid anything with bone marrow in it.