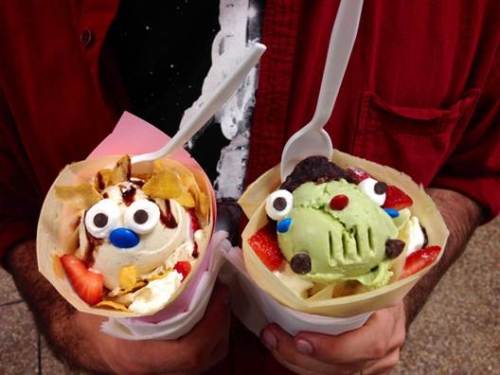 One of our longest running segments on this site has been “Goddamn it Japan, You’re Doing it Wrong,” where we look at classic American products and foods that Japan has gone, well, batshit insane with.  Not to break the fourth wall or let you in on our writing process here (it involves, just, so much alcohol, and just a hint of xenophobia that’s probably going to age really horribly over the next five years) but we love writing these posts.  We get to talk about American foods we love (like Doritos, or Kit Kats), we get to talk about flavors of these things that we love that are so abhorrent and disgusting that we take on a tone of unearned righteous indignation, and finally, we get comments from the kind of people who get really upset when a website whose banner has a grizzly bear holding a shotgun in front of an American Flag talks shit about Japan.  We cannot stress enough how much we love it when this happens.  People get so mad, and we’re not saying that the only people who feel this way are white men who have visited Japan and “got into the culture a bit too much” ifyouknowwhatwe’resaying, but we’re totally saying that.

People write fucking novels, and we typically respond with a shrug. 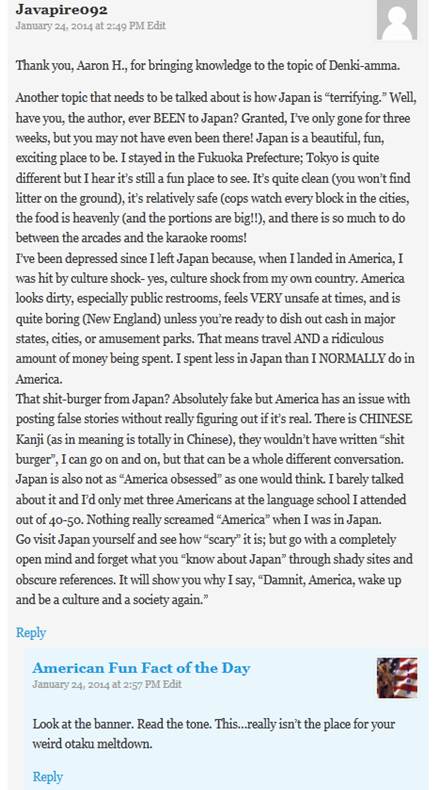 Our favorite part of this is the “well, I’ve only been to Japan for three weeks, BUT!”

So yes, this is us basically fucking daring you guys to get offended at this segment, which might defeat the purpose, but that’s beside the point.  We’re going to talk about how Japan fucks up ice cream, and oh God, do they know how to fuck up ice cream. 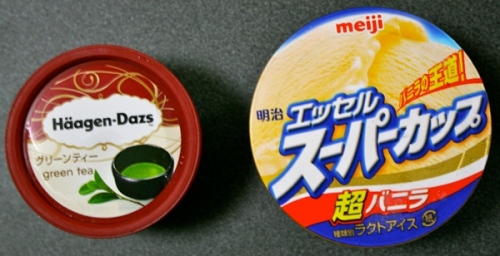 Making ice cream is deceptively easy, even without shelling the $70 for an ice cream maker—you can just take cream or custard, mix it with sugar, and shake it in a bag filled with ice and salt for a while until it ice-cream-ifies for you.  We tried doing it once with…middling results during an office Christmas party, which is less a condemnation of homemade ice cream attempts, and more a cautionary tale against handling gallon bags filled with ice and salt while blackout wasted.  The fact that it’s easier-than-you’d-expect to make, and that it’s typically delicious, makes ice cream a prime Icarus candidate—as documented by our article on America’s grossest Ice Cream flavors, it’s easy to find yourself flying too close to the sun and saying, “Fuck it, why don’t we just sell lox flavored ice cream?” 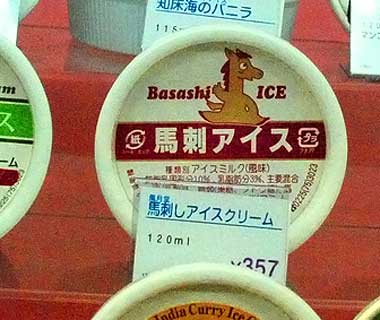 *stands up from chair*

*walks over to window*

Okay, there, got that out of our system.  Wait, there’s one more-

There.  Now we can talk about this.  First of all, let’s talk about horse meat.  People get weirded out by horse meat in America, which we both understand and also don’t really endorse.  Have you ever eaten horse meat?  Some of our staffers have—we’re strongly of the opinion that everyone, especially vegetarians, should try all animals at least once.  That being said, if your response to us screaming over the concept of raw horse Japanese ice cream is, “Well, you know, other countries eat horse, don’t be so uncultured” your logic circuits have shorted, you might want to return to the mothership to get that fixed.

Horsemeat is popular in Japan, especially as basashi, where it’s served in thin slices of sashimi, dipped in soy sauce with ginger and onions added.  And because, when it comes to desserts, Japan operates under the misguided and terrifying mindset of, “If we like something, no matter how savory, sour, or salty it is, we will turn it into candy or ice cream” there’s a basashi ice cream that’s apparently noteworthy enough to make the Wikipedia page on horse meat.  Because either Japan doesn’t like you, and wants you to suffer, or they really like the Goddamn it Japan, You’re Doing it Wrong series we do and wanted to give us a big old fat softball over the middle of the plate to start things off with. 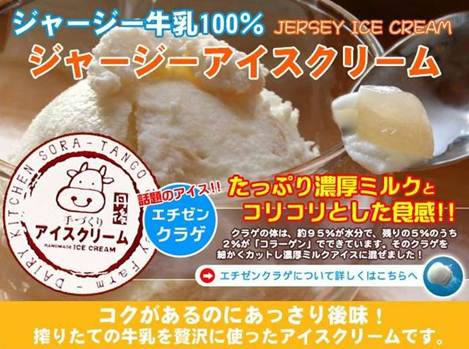 Oh you sons of a bitch.  God…goddamn it.  Listen, we thought this was going to be bad, but we had no way of knowing it was going to be this bad.  Normally these articles are like, “Ha, wasabi Kit Kats?  You so crazy, Japan” and then we get grossed out at like, buttered corn flavored candy, and move on.  But this is starting to border on cruel.  When ice cream made its way to Japan, was there something lost in the translation?  Like, did someone go, “Hi, Japan, here’s a little gift, it’s called ice cream.  It’s sweet, delicious, and makes you happy” only they accidentally replaced those three descriptors with “weird” and “horrifying” and “all is doom, all is darkness, no hope, none are righteous”?  Because that’s the only way that we can accept that there is a just world where a company makes 2,000-3,000 cartons of vanilla jellyfish ice cream every year.

So, you know bubblegum ice cream?  Where you take, say, vanilla ice cream, and just put some bits of bubble gum in it?  That’s fun, right?  Admittedly, kind of a pain in the ass to navigate around a few dozen Chiclets while eating ice cream, but still, fun!  It’s a fun way to eat ice cream while also not shattering your faith in humanity.  So, vanilla jellyfish ice cream is just like that, only instead of bubblegum, they use chunks of jellyfish, and probably memories from your childhood that you suppressed with the aid of years of therapy.

The Wall Street Journal described the process of making this nightmare ice cream flavor no nightmare was correct the first time by saying, “The jellyfish is soaked overnight in milk to reduce its smell, and then diced.”  Please do not gloss over that last sentence.  Let the weight of it sink in.  Generally, and maybe this is just us, being crazy Americans with no knowledge of other cultures, who limit ourselves to making ice cream out of sweet things like strawberries or chocolate or, we don’t know, something that doesn’t require you steep it in fucking milk overnight to reduce its smell, but fuck this right in the face.   No.  Just.  No. 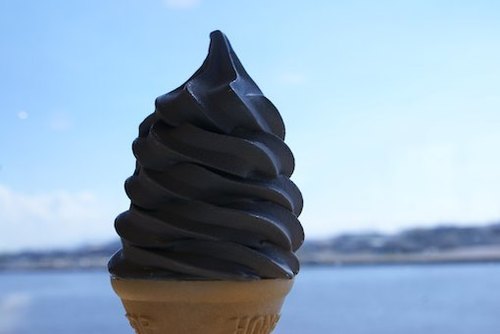 Japan.  Japan, do you see what you’re doing?  You have to stop.  Our mouths formed the words, but no sound escaped.  Had we been struck deaf, our own voices to be a stranger to us for the rest of our existence, or had we only temporarily lost the ability to speak in the face of such horrors?  We hoped it was the latter, so that our words might eventually fall on a caring soul that could pass the message forward, yet we feared it was the former as we felt darkness close in on us.

Please stop, we try to scream as we see squid ink ice cream twirled onto a cone in soft-serve form.  You don’t know what you’re doing, we silently gasp when we see it sold in cartons for home consumption.  You goddamn sons of bitches, you’ve transferred it to America, this is worse than Ebola we resignedly think to ourselves when we see that places in Los Angeles have started selling it too. 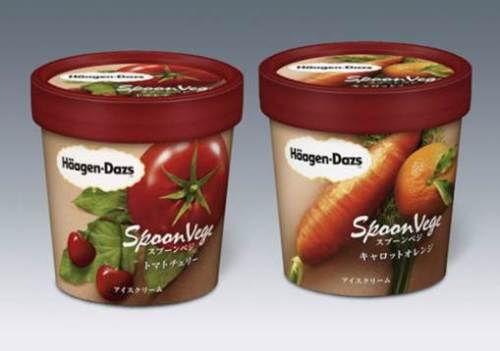 We’re asking this question in all sincerity—what sounds grosser, meat-flavored ice cream, or vegetable-flavored ice cream?  The answer isn’t as straightforward as you’d expect.  At first you’d say, yeah, definitely meat, oh God, that’s disgusting, but then you try to translate the flavor of “salad” to “ice cream” and your synapses start firing randomly in protest, possibly causing you to burn down a farmer’s market in protest which, legally, is not your fault, because you were not in control of your actions, it was the synapses, the synapses all the way.

But yes, in May of this year, Haagen-Dazs decided that Japan didn’t have enough terrible ideas readily available at their grocery stores or bodegas or portals into another dimension where jellyfish and ice cream are a desirable combination or wherever the fuck they buy their food, and they came out with “cherry and tomato” as well as “carrot and orange” flavored ice cream.  They call this series “Spoon Vege” which just has to mean something obscene in at least some languages.

If we had to play Devil’s Advocate on our own criticisms here (which, for those keeping count, would be roughly the first time that’s ever happened), we might say, “But hey, they’er putting fruit in there too right?  How is that different from those V8 Splash drinks that add fruit juice to vegetable juice?  Those are, well, they’re not awful, right?”  Well first of all, we’d reply, they’re really “alright” at  best.  And even then, that V8 shit only has between 5 and 10 percent juice, the rest is corn syrup, good old God-honest American corn syrup, so suck it, it’s a totally different thing.

Japan, get right the fuck out of here with your orange carrot ice cream bullshit.  The fact that it’s healthier than other kinds of ice cream only makes us hate it more. 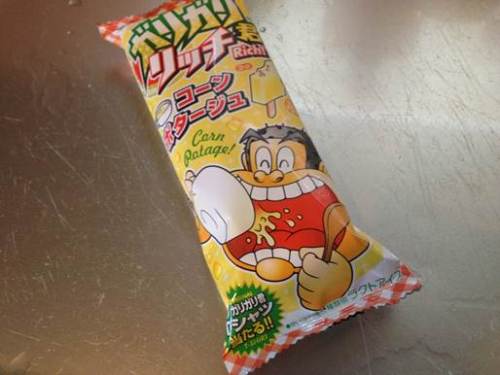 You can’t be fucking serious.  We thought just regular vegetable ice cream was bad, but this is worse.  Corn.  Soup.  Ice cream.  There’s no way we can even justify this, so we’re going to just list the five things we learned about the corn chowder ice cream, in reverse order of how horrifically unsettling this product is.

We’ve done these Japan articles so much, we thought this would be fun.  We thought it would be a laugh.  This is not fun.  This is by far the darkest Japanese food has ever taken us. 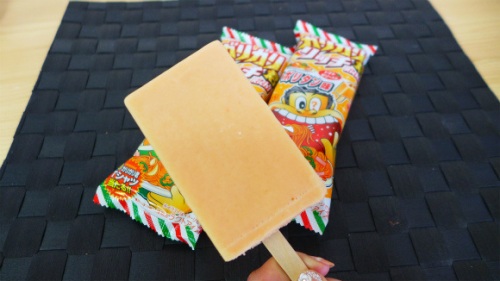 Why are we doing this to ourselves?  Is this some sort of penitent punishment for all the times we dared say something like, “Man, Japan, you gotta cut it off with the watermelon and salt flavored Pepsi”?  Why is this happening?  What is happening?

So yes, on the rampant success of the corn chowder ice cream (yes, rampant, yes, success, yes, die alone) Garigari-kun decided to release a Napolitan flavor, which of course is a pasta dish made with ketchup, onion, and green peppers that’s popular in Japan, and yes, we’re still talking about ice cream, and yes it’s alright for you to have begun vomiting uncontrollably, we’re surprised you made it this far into the article before that happened.

We know what you’re wondering—does this one have strings of spaghetti in it, like how the corn chowder had bits of corn?  We’d like to answer that question in two parts.  First of all, thankfully, no, there is no pasta in there. This is not ice cream with spaghetti stringing through it.  Thank God.  But second, and more importantly, how fucked up is it that you had to actually ask that question?  How can we have sunk so low?

There are many, many more ice cream flavors that are crimes against the concept of food as sustenance, but we’ve reached a breaking point.  We’ll come back with more Goddamn it Japan, You’re Doing it Wrong articles specifically about ice cream, but for now, we need to take a break.  Talk about, say, whiskey again.  Something warm, something comforting.  Something American.