“If you DON’T own the ‘Three Wolves Howling At The Moon’ shirt, you’re an awful person and I hate you.”

The staffers of AFFotD have a soft spot in their heart for The Mountain, the geniuses behind the Big Face Animal shirts who still haven’t taken us up on our offer to graciously accept any free products they’d be willing to send our way, but that’s neither here nor there.  The Mountain is staffed by dedicated workers who, we assume, are a lot like us here in the America Fun Fact of the Day offices.  We imagine that they, like us, spend their weekdays recovering from the temporary blindness that inevitably occurs after swigging moonshine from a poorly maintained sill, whispering into the void “what now?” as the void whispers back “you need a T-shirt of a Gorilla in a spacesuit giving you a thumbs up.”  The void is wise.

The Mountain has perfected the art of T-shirts that are stylish, comfortable, and work surprisingly well as a makeshift pot handler in a mobile meth lab, but that doesn’t mean they’re content to rest on their laurels watching stacks of dollar dollar bills flood their P.O. boxes.  No, they are constantly striving to make new and exciting shirts because goddamn it, someone out there wants to wear a giant house fly face on their chest, and if The Mountain isn’t going to oblige them, who the fuck will?

So every now and then we like to bring up The Mountain catalog and list some shirts you need to be buying at this very moment.  It’s partially a public service announcement, partially a play to get free shit from The Mountain, and somehow the free publicity we offer actually counts towards our community service hours for some reason.  America! 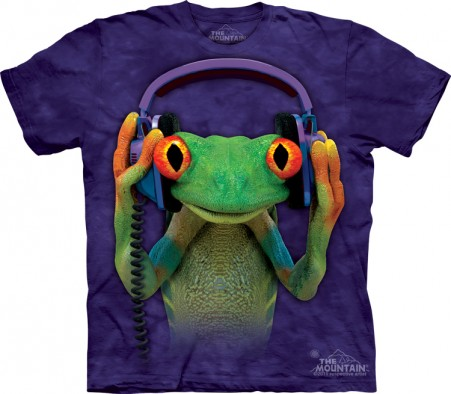 We’ve not done any studies, but we’d like to point out that ever since The Mountain started making and selling T-Shirts, initiatives to legalize marijuana have become increasingly popular throughout America.  You can view that as a coincidence, or you could just really stare at this poisoned arrow frog DJ for like twenty minutes chomping down on a bag of cheese puffs wondering if a contact high can be transferred through a computer.  Easily the best part of this entire shirt is that even the frog knows that it’s doing something unnatural.  It’s sort of like when you have a guy who is a bit of a klutz, and he gets really drunk and goes out on the dance floor, and everyone is like, “Oh no, this is not his natural environment, this is going to end so badly” and then Thriller comes on, and he starts doing the dance, and just crushes it and everyone joins in, and he has that look on his face that says, “Holy shit, this is awesome, but what is happening right now I DIDN’T THINK I KNEW THE DANCE MOVES FOR THRILLER”?  Yeah, that’s what this frog is like right now.  Respect.

This is called the “Patriotic Tiger T-Shirt” and it raises a lot of questions that the more sober of our readers might not have originally thought to ask.  Sure, most people would look at this shirt and go, “This badass tiger is posing in front of an American flag, and that flag, OHBYTHEWAY, is starting to morph into a tiger head, because that’s how much this tiger loves freedom and America.”  But here’s the thing- tigers aren’t from America.  These fuckers wander around in Turkey and Russia, but you won’t find them in America.  Patriotic wolves?  Now that makes sense.  We’re just not sure how to feel about patriotic white tigers.  Did the tiger come over to America at a young age and fall in love with the freedoms we afforded?  And as a result, after working for a period on a legal Visa, and having filed the proper paperwork request, did the tiger go to the USCIS and taken a citizenship test, the whole time suppressing its very natural instinct to maul every human in the room also taking the test?  Then, having passed the test, did his body start slowly morphine into an American flag, because he had devoted so much of his past life to America ever since he stepped foot here that he had become American not through birth but through his actions and mindsets?  Because, in that case, that’d be pretty awesome and we’d wear the fuck out of that shirt, to be honest. 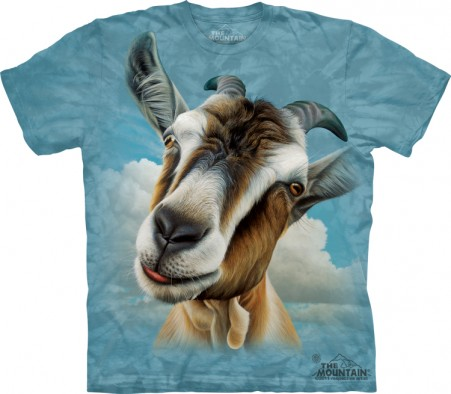 Goats are one of the uglier animals out there, if you’re being really honest with yourselves.  Yes, they can sound comically human at times, but they’re still gangly looking kick-monsters that eat anything and look weirdly like DJ Qualls.  Just look at that guy up there.  He’s tilting his head inquisitively, but there seems to be something sinister about his curiosity.  That’s not the face of an animal thinking, “Huh, what’s going on here, are you going to feed me?”  That is an animal that is thinking, “Yes.  The balls.  I am going to kick you in the balls.” 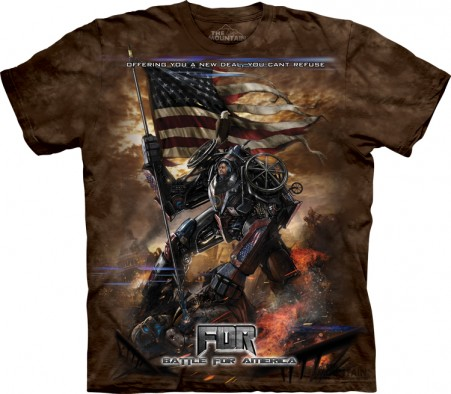 YES!  We figured it was a matter of time before The Mountain would catch wind of AFFotD’s favorite artist, Jason Heuser, and combine his considerable talents at illustrating America’s heroes in their most badass incarnations with The Mountain’s flare for putting awesomely insane things on shirts.  We can only hope this is the beginning of a long and beautiful partnership, by which we mean to say, we want to get every single one of Heuser’s presidential illustrations on our body as soon as possible.  Wait, that came out differently than we intended.  We want it…on us…wait…

This one is called Big Face Hamster of Mystery, which apparently is a signal that Groucho Marx is no longer a culturally relevant historical figure since they can’t even be bothered to call it “Big Face Hamster With Groucho Glasses.”  Where are his ears?  What are the glasses resting on?

Here we see a very simple message.  “Beware my American chest, for I was assaulted by a bald eagle version of the face-hugger from Alien, and soon the majestic bird that symbolizes freedom will angrily burst forth from my chest cavity and claw at you with its vicious talons that were birthed from a sea of blood and anger.”  We’ve all seen that sentiment expressed in one form or another while growing up.  For example, our editor-in-chief, Johnny Roosevelt, remembers warm summer afternoons spent at his grandmother’s house when he was a young child.  She’d bake apple pies and let him sneak a nip of bourbon here and there, and right above her oven was a hand-carved wooden sign that said, “Watch your ass, a bald eagle is going to bust the fuck out of my chest and jack your face up with claws of freedom.”  God bless you, Grandmamma Roosevelt. 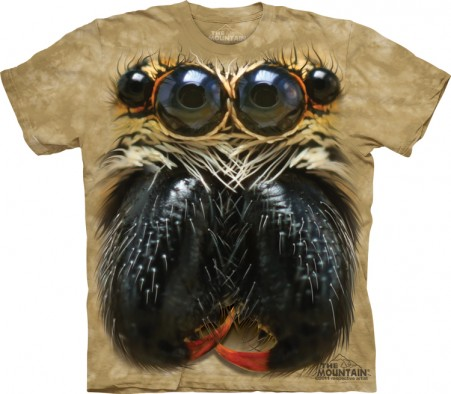 “HI THERE I AM BOB THE TARANTULA AND I WOULD LIKE TO SHOW YOU MY TERRIFYING TARANTULA EYES WITH MY MASSIVE HAIRY TARANTULA FANGS THAT I COULD BITE YOU WITH AND HEY WHERE ARE YOU GOING WHY ARE YOU ALL SCREAMING IN TERROR AND RUNNING AWAY I AM JUST A SIMPLE GIANT TARANTULA STARING AT YOU FROM THE CHEST OF A 350 POUND INDIANA MAN LIVING IN A TRAILER PARK OH I GET IT YOU ARE TERRIFIED OF ME NOT BECAUSE I AM A GIANT TARANTULA BUT BECAUSE OF THE RED STAINS DON’T WORRY THAT WAS SIMPLY PIZZA SAUCE THAT HANK SPILLED ON ME HE IS SUCH A KLUTZ.

OH ALSO I GUESS SOME OF IT IS BLOOD BECAUSE I AM A GIANT SOULLESS SPIDER AND I EAT PEOPLE FOR SUSTENANCE LOLOLOL THERE IS NO ESCAPE CHOMP CHOMP CHOMP GOODBYE!”

Ha.  More like Doggy Balboa, right?  Right?  No?  Nothing?  Yeah, that seems as good as a place to stop for now.   Don’t worry, we’ll go back to this well as soon as they come out with some SharkNado-themed shirts.  That’d be so clutch.