More of America’s Even Crazier Patents

We have, on occasion, taken a moment to look at some of the more mind-melting patents that have been approved in America.  While we support these patents as a sign of the same American ingenuity that led to the invention of the internet as a way to ensure Japan keeps itself busy inventing terrifying pornography, we also love the fact that the more imaginatively insane members of our society are the ones who are most likely to wake up in a cold sweat one night and decide, “My God, I need to invent a mechanical ice cream cone!”  Honestly, the booming patent industry is probably the reason why our serial killers have such lower body totals than their predecessors, since they’re too busy trying to invent a knife that also can be worn as a shirt to be spending as much time hunting for victims.

And where there are Americans showing their inner psychological issues in absurd, hilarious ways, we at AFFotD are here, ready to handpick some of the best and display for you…

More of America’s Even Crazier Patents

Did you know that someone patented the sham wow?  Probably?  We’re not even going to look that up, because it sounds right to us.  The point is, of all the hundreds of absurd infomercial inventions you have seen in your life, many of them have been patented.  And for every patented item you’ve seen on TV, there are literally thousands of far stupider items out there that have been patented by someone who felt their invention was the most important thing since the light bulb or KY Jelly.

That’s why we get products such as… 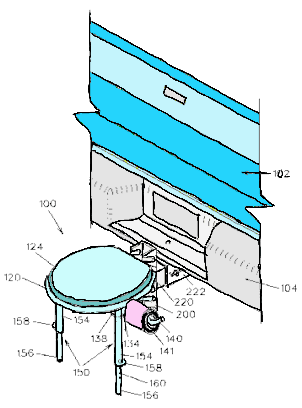 We’re going to let you try to examine this for a bit before we confirm your worst fears.  You know when someone is describing something to you, but it’s so horrible they’re being purposely vague?  You begin to think you have an idea of what it could be, but you won’t dare say it out loud, and you keep telling yourself, “Noo, it…it can’t be that.”

Oh but it is, America.  This is a toilet you put on the back of your truck. 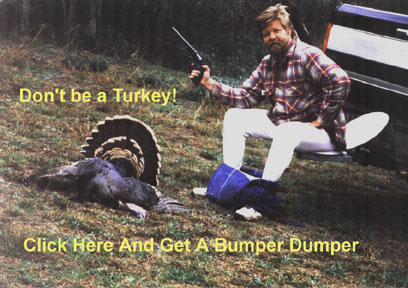 “Nothing to see here, folks.  Just a man in long johns holding a gun on a toilet seat attached to the back of a truck posing next to a dead bird.”

The original patent, #6,125,480, lists this as a “Vehicle mounted toilet seat” which makes it sound slightly classier than their commercial name of the “Bumper Dumper” while sounding not quite as classy as “literally anything else in the world.”  The patent claims, “This…toilet seat can be used by hunters, fishermen, campers, construction workers, military, boaters and other people who find themselves away from conventional bathroom facilities.”  This is a problem we can’t begin to fathom.  We have never gone camping and thought to ourselves, “Man, it’s really a pain to try to find outhouses out here, or to just dig a hole in the woods, if only I could attach a toilet seat to the back of my car and poop in a bag.” 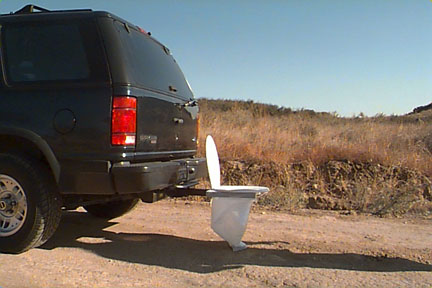 How could we make this image even more unsettling?  By pointing out how the bottom of the bag is resting on the ground….yeahhhh.

If we ever met Randall Jay Soffar and Mack Douglas Hopkins (the patent holders in question) we would never be able to have a conversation with them.  They’d say they were inventors, and we’d say, “Oh really?  What have you invented?” and they would have to explain themselves initially because you can’t just spring “We invented a toilet for the hitch on your truck” on someone without properly preparing them.  Here’s how we imagine the full conversation would go.

Bumper Dumper Inventors:  Well, okay so you know how when you go camping?

AFFotD:  Yeah, you dig a hole in the woods and do your thing there.  Or look for an outhouse.

Bumper Dumper Inventors:  No, but don’t you wish you could just…poop in a bag?

Bumper Dumper Inventors:   No, like, a bag, but on a toilet seat, like, attached to the back of your car.

AFFotD:  In front of everyone?

Bumper Dumper Inventors:  No, just on the back of your car!

Bumper Dumper Inventors:  No!  Goddamn it!

That being said, not everyone likes to go camping.  Some people like traumatizing their children while pretending to be a goddamn horse.

If you asked us what was the first thing that stood out to us in this picture, you might be surprised by our answer.  No, it’s not the goddamn saddle that the father is strapping to his waist, it’s the fact that the “child” in the image clearly has an adult’s face.  And the “father” looks like Andre the Giant.  This doesn’t look like some sort of attempt to patent piggy back rides, it looks like an up-and-coming jockey decided to strap himself to a 7 foot tall man and have him gallop around.  We’d probably be more supportive of this invention if that’s what it actually was.

Patent #6,345,745 was submitted under the totally-not-insane-sounding name of “Method for Carrying a Child.”  We have to imagine that was some sort of cruel joke to whatever patent worker had review this report and think, by reading it’s title, that it would be anything other than a saddle made for a child to ride his father like a horse.  Giving this item such an innocuous name in the patent process would basically be like sending someone a severed human finger in a Fed-Ex box marked “Perishable.”

After Paul R. Harriss of Livermore, California decided to make a Saddle for Dads to wear, it was dubbed the “Daddle” because apparently there’s no such thing as having too many sub-par copywriters.  It’s being sold now, and the people selling it even created the most depressingly sparse website that 1998 has to offer.

Do NOT “click here” we’re pretty sure it just automatically tracks your location and sends an email to Chris Hansen. 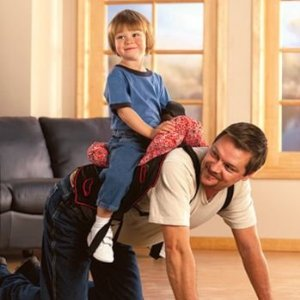 True story: It is impossible to find a picture of this product in use where the kid looks related to the adult.  We’ll let you interpret that however you want.

This product is meant for use on children between the ages of 2 to 6, which means that someone had to spend time researching how old is “too old” to ride on your father’s back as if he were some type of pack animal.  And now, to haunt your dreams, we present you a terrifying look into the mindset of the types of people who would buy this product, as evident by the “Customers who viewed this product also viewed…” section on amazon.com. 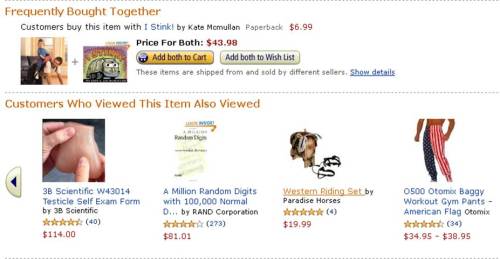 Let’s…let’s move on.  Here’s a product that we’ve thankfully not been able to find on amazon.com…so far.

Oh isn’t that just lovely.  In 1991, David Kendrick decided he really liked to hear awkward silences in response to being asked what he does for a living, so he went out and invented a clock that counts down to when he thinks you’re going to die.  Unlike the last two, he wasn’t even trying to hide anything- the name for Patent #5,031,161 is simply “Life Expectancy Timepiece.”  Apparently, someone had a patent on a picture of a skeleton with the words “EVERYONE WILL DIE SOMEDAY” written on it, so he decided to spend an ironically large amount of time to invent a clock to tell you how much time you have until you will (probably) die.  We’re honestly surprised that in description field for this patent, Kendrick suppressed the urge to write, “Now I am become death, destroyer of worlds.”

The more we think about it, the more violently we oscillate from “terrified” to “depressed.”  Because we think, “Since this was invented, the owner has seen the far right number on his watch go down by at least twenty years” and we get a little sad.  But then we think, “If you were to buy this…it would probably have to start out set at zero before you set it…” and we get freaked out.  Either way, we are slightly disappointed at the fact that we can’t buy this in the general market, because we would totally send it to people we don’t like and have it set so it tells them they only have one week to live.

As terrifying as this product must be to the elderly, the following must be equally terrifying to the young…

2 responses to “More of America’s Even Crazier Patents”