“I’m not saying that if you go home with me tonight you will end up as an integral part of a compost heap, but I did once invent a diaper for a parrot.”

We’ve on three previous occasions done our best to warn you about future Jigsaw-like serial killers by posting about the most insane patents that can partially be blamed on the failings of our current mental healthcare system.  Yes, that image up there is ear-warmers for a poodle.  Yes, the ear on the right is noticeably lower than the left, giving you the impression that this product actually slightly mutilates the dog.  Yes, someone spent months preparing this patent, and spent nights where the last thought they had before going to sleep was a hopeful dream about the fame and riches they would get from their patent.  Holy shit, that’s depressing.

The most terrifying aspect of insane American patents is the amount of effort put into them.  Even the simplest invention has to be listed, drawn, itemized, and described in meticulous detail.  While this makes a lot of sense for something like a helicopter, LCD television set, or toy gun that shoots Tabasco sauce, there are times when this can come back to make the inventor look somewhat foolish.  For example…

ANIMAL TOY (AKA- A STICK)

You know how people that study science in college tend to look down their noses on people who major in programs like English, Philosophy, or Comparative Literature?  Well the reason why those degrees tend to get a bad rap  (and a lot of “you’re going to end up either a fry cook or an AFFotD writer” jokes) is that many people can get degrees in that field just by bullshitting.  When everything is subjective, the person who can take the least amount of work to sound like you put the maximum level of effort is really the scholastic achiever, since they get much more time to hone their binge drinking skills.

Well, this up here is the science degree version of bullshitting.  Because looking at the above image, for the “Animal Toy” patent, number 6,360,693, you can pretty accurately determine the conversation its “inventor”, Ross Eugene Long, III had with his no doubt terrified friend before submitting this patent in 1999.

Ross Eugene Long, III:  Has anyone invented a stick yet?

RSL:  I mean to say, has anyone claimed a patent on that yet.

RSL:  My spirit guide said it would.  He’s saying it right now.

FOF:  …Uh, Ross… we’re the only people here.  This is a highly disturbing conversation for two guys in a sauna to be having.

RSL:  THE SPIRIT ANIMAL SAYS I MUST SACRIFICE YOU TO THE SAUNA COALS

What we’re trying to say is that this patent is totally bullshit.  And maybe that Ross Eugene Long, III totally has killed a dude.  This next one actually (probably) requires science (fossils are real), but has also come from the mind of an equally disturbed individual. 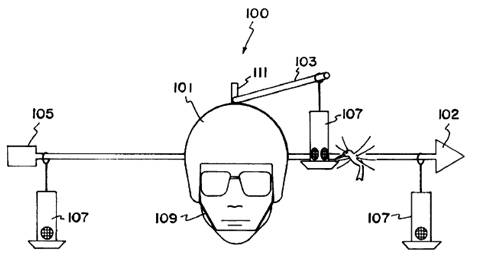 Wow, David M. Leslie, patent holder number 5,996,127, is like the Vincent Van Gough of inventors.  By which we mean to say he is clearly insane.  For those of you wondering “Why does the severed floating head of the villain in Terminator 2 have an arrow going through him, and why is there a hummingbird and…I’m dead, aren’t I?  I died in my sleep and now I’m stuck in some confusing Purgatory, is that it?” we first want to say, it’s okay, shhh, you’re still here, you’re still here.  But secondly we would point out that this David-Fincher-worthy mind fuck is a bird feeder for the people that hate having to watch their bird feeder from dozens of feet away, and who also hate being touched by attractive members of the opposite sex in a sexual manner.

The patent was submitted under the title, “Wearable Device for Feeding and Observing Birds and Other Flying Animals,” and try as we could, we were unable to confirm that Rain Man helped write that sentence.  But he probably did.

If you try to think about the impracticality of this advice for more than ten seconds your nose will start to bleed (“how does it work if you…move?  Why is to top part swivel but the left and right one remain fixed?  Is it even possible to walk forwards with this on and…oh God…oh, yeah that’s a bad one…need more tissues”) but let’s move past that and focus on the unique brand of insanity required to invent this product.  Because, fuck it, we’re going to do dialogue gags with each one of these, just because apparently this is the only way for us to be exposed to such insanity without breaking down and trying to invent an egg beater that cools and properly stores sour cream.  So this right here is the “As-Seen-On-TV” Infomercial for this product that only exists in our dreams.

Patrick Wilson:  Hi, I’m Patrick Wilson.  You might remember my bare ass in the film Little Children, when I was really giving it to the naked chick from Titanic.  Hyperlinks are fun!  But most of you probably recall my turn as the “Nite Owl” in the “…meh” film, Watchmen.  What you might not have realized was, I chose that role for more than just the chance to bang Malin Akerman on screen (ha ha!  Nude scenes!).  I actually am a huge fan of birds, and especially watching birds.  Silently, and possibly menacingly!  That’s why I’m here to unveil this fine product.  But first, let’s get the explanation of the product from its inventor, David Leslie!

David M. Leslie:  The wind whispers when a bird flaps its wings.

DML:  I believe that every time a bird touches what once was man’s, it steals a piece of that man’s soul, and the only way to regain that which you lost is to stare deeply into their hollow, black eyes.

PW:  I’m going to fucking fire my agent!  Ha ha!  What I think David meant to say was that, this advice, the FEEDER HELMET, gives you a unique chance to watch birds eat just inches away from your face!

DML:  You mustn’t eat the birds that land to close for their feathers are venom and their wings will sap your dreams.

PW:  Ha ha!  No one was even thinking about that as a remote possibility, haha!  Eating the birds, Jesus Christ, that’s a new kind of fucked up!  Ha ha!  Anyway, this product is great for robins, hummingbirds, sparrows…

DML:  You mustn’t trust a Sparrow, Sparrows are created from the darkness every time a nest is abandoned.

PW:  Just let me do the talking, David, you’re sucking the life out of this thing!  Anyway, it’s a great way to be one with nature, ha ha!  I’m forever unclean for doing this!  Ha ha!

DML:  When the birds doom our society I shall be their king.

…Huh.  That got…dark.  Let’s just pretend that didn’t happen, shall we?

Stop us if you’ve heard this one before.  You’re sleeping outside because your damn landlord changed the locks again.  Not only do you think that it’s patently (HA!  GET IT!? Puns.) unfair that he’d try to make you pay rent every month, but it looks like it’s about to rain!  You’re not going to sleep under a tree like some sort of goddamn animal, and you’re not welcome under the freeway bridge anymore since you killed the leader of that roving band of nomads, so how can you keep your beautiful beautiful face dry while sleeping in what is sure to be the storm of the century?

Well it’s a good thing you have always carry your pillow that turns into an umbrella with you because government agents use cotton to broadcast your thoughts to the moon.

Marielena Jane-Prats is the holder of Patent number 6,711,769, “Pillow with Retractable Umbrella.”  She also is the holder of a vast collection of shrunken heads (we are assuming).  Listen, we’ve been accusing a lot of people of mental shortcomings in this article, and that’s because we are absolutely within our right to do so.  Yes, it’s a technical achievement to have an umbrella built in a pillow, just like it’s technically impressive to invent a crematorium that doubles as a stereo for your ipod.  That doesn’t diminish the level of crazy involved.

And don’t think we didn’t notice how much that “umbrella” looks like a circular saw blade.  Not saying, just saying.

Anyway, in order to continue our running gag for this article, we are going to show the conversation Marielena had with a stranger on the bus after she realized she wanted to invent a way to have something in a pillow, but before she realized it was an umbrella.

Marielena Jane-Prats:  I ride the bus because the state says I can’t drive cars.

MJP:  I want to put things.  Put things in pillows.

CBR:  Uh…driver?  Can someone help me out here?

MJP:  What to put in a pillow.  Pills.  But I already put pills in pillows.  They all have faces and whisper in my ear as I sleep.

MJP:  I can either put…umbrellas in…the pillow.  Or bodies.  Umbrellas or bodies.

Ha, who the fuck are we kidding, we love everything about this invention.  You keep on doing how you do, Mason Schott McMullin, Robert Platt Bell, and Mark Andrew See (holy shit it actually took three people to invent this thing?).  Maybe someday you fellas can get a fun fact of your own.  And if you wanted to send us some Beerbrella prototypes, we wouldn’t say no.  Hint.

This entry was posted in Insane Patents and tagged America, Patents. Bookmark the permalink.