American Patent Holders (Who Are Absolutely Going To Kidnap You)

Spending 1500 words warning the American public about the insane and evil intentions of America’s craziest patent holders is a lot like warning you about that drifter you hit with your car a few months back- no matter how hard we try to caution you, it won’t do any good because LOOK OUT HE’S RIGHT BEHIND YOU!

So yes, we’ve time and time again warned you of the ultimate insanity behind a vast array of American patents.  A toilet seat you attach to the back of your car?  Yeah, that’s a thing.  A leash for your pet snake to wear?  Yup, patented.  An hour and a half piece of entertainment that acts as a vessel to steal your soul, dreams, and sense of humor?  Well, no one patented Jack and Jill, but you get the idea.

However, in today’s Patents segment, we’re planning on doing things a little bit differently.  We’re not going to just show you strange patents (though, seriously, look at that picture up there.  A dog scuba tank?  That’s fucking baller).  Instead, we are here as a public service announcement, since we will give you a list of…

American Patent Holders (Who Are Absolutely Going To Kidnap You)

We don’t want to make you feel paranoid, America, but every day in a crowd you walk by dozens of American Patent Holders who want nothing more than to invent a way to kidnap you, either for ransom money or to brainwash you into doing a TV infomercial for their product.  How do you think Billy Mays got his start?  Well, cocaine, sure, but the point is, American Patent Holders (heretofore to be referred to as “APHs”) are out to get you.  You can’t hide, because they are masters of disguise who look just like an average American.  Sometimes they might wear a lab coat, but they’re normally much harder to spot.  So while we can’t warn you about every APH, we can at least let you know which APHs are very clearly trying to kidnap you this very day.  People like… 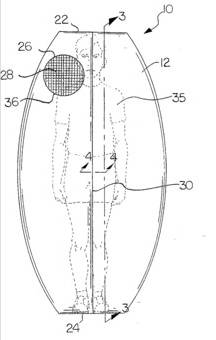 You say “Self Containing Enclosure for Protection from Killer Bees” we say “portable body storage device with air holes for the victim to breathe through.”  Look at that drawing, even the fake person made out of dots is totally terrified about something other than Killer Bees.  An attack by a swarm of Killer Bees is unexpected, whereas this product clearly would require someone having the foresight to say, “Oh, right, I’ll need to bring my body bag along with me today, just in case, you know, for Killer Bees, and absolutely not for the mailman to get stuffed in there, ha ha!” while winking to no one in particular.  And also, we do have to point this out—look at number 4 on the image, right there in the middle.

Virginia L. Butler is going to use this devise to kidnap you.  There’s no other explanation.  She invented a body bag that has breathing holes, it doesn’t matter what she says you should use it for, she clearly intends to use it for kidnapping.  If you invent a tranquilizer gun and decide to call it “firearm device for shooting darts in the game of Bullseye” you’ve still invented a goddamn tranquilizer gun.  We’re onto you, Virginia Butler.  Killer Bees our ass. 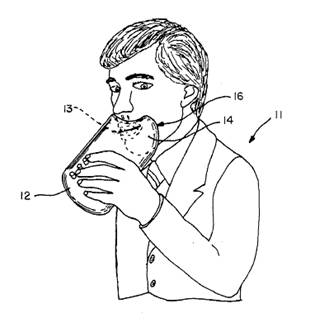 Oh sweet merciful Yahweh, there’s so much wrong with this patent.  First of all, why does it look like the guy is grinning?  Secondly, look at his hand.  That’s just not natural.  And thirdly, try as we might, we can’t figure out what the hell this product is even made of.  The patent says foam, but…actually, no, we’re losing our focus here.  This married couple from Belmont, California decided to get together and invent a product to muffle the screams of their victims.

Nothing about this product gives us any indication that the product is meant for sane, rational people. For example, the following is an actual, word-for-word description of the necessity of the product (The fact that it is in the voice of the Buffalo Bill killer from Silence of the Lambs was only added in your head while you read it).  “Many of use[sic] become so frustrated by some task that we are undertaking that we would like to ‘scream’.  Others of us get angry at another person, happening, event, or the like, so mad that we would like to vent our anger by screaming or yelling.  We generally suppress the desired[sic] because we would look foolish and also disturb others when they are tied up in the back of our van.”  Okay, so we added everything after the “disturb others” line, but we’re pretty sure it was implied.

…So they invented a product to muffle you as they shove you into the back of their van and make you rub lotion all over yourself while a small dog barks at you.  At this point we have to wonder why the people who approve these patents don’t contact the authorities.  Even a Therapist is supposed to call the cops if you admit you’re going to muffle someone and kidnap them.  You’ve endangered so many lives, Patent Official who reviewed this patent!

Oh hey, speaking of Silence of the Lambs… 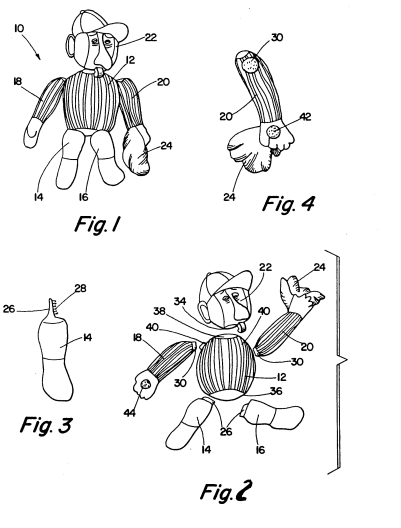 Can you still hear the doll screaming, Clarice?  Mary Russell decided that she would name this doll version of the Little League Baseball Coach of your nightmares a “Tear-Apart Stress Doll” because she got strange looks when she’d ominously call it “Practice.”  At least while Mary is spending her time showing us the order she’s going to follow while dismembering her victims, she had the good sense to make the arm in figure 4 look incredibly phallic, because we at AFFotD are constitutionally required to point out any item that sort of looks like a penis.

“Hey, have you ever had the problem where, like, you’ve kidnapped someone, you put on the human muffler, you have them in your ‘Killer Bees’ bag, but when you’re inevitably dragging them through the woods, it’s too easy for the police to track you by using your show prints?  If only there was a way that I could walk through the woods and make it look like an animal was walking that way, instead of me!  That’d take so much of the hassle out of this whole kidnapping thing!”

You’ve finally done it, Waldemar!  You killed him!  You killed him and put his head on display in a jar with…wait, are those Cactuses?  Cacti?  Either way, we’re done playing.  This just took a turn.  Good day, sir.

This entry was posted in Insane Patents and tagged America, Patents. Bookmark the permalink.