Many classic characters have been created for art and film.  There’s Hamlet, Sherlock Holmes, that one dude in The Wire that wasn’t Omar but had the bow tie, all of these characters are memorable parts of our culture’s collective memory.

Come to think of it, Omar might be a slightly more memorable character.

So given this absolutely complete list of popular characters of film, stage, and (ugh) literature, what do they have in common?  Passion?  Eloquence?  An enviable fashion sense?  Well, none of them hold a candle to the figure of today’s AFFotD, who is of course… 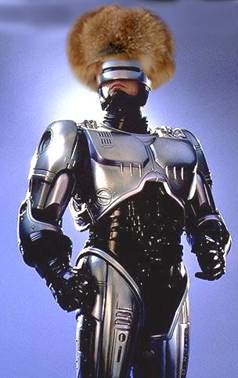 The Motherfucking Robocop began his unending quest to clean up the city of Detroit from scumbags and creeps the same way that most of us find our true calling.  He got his arm shot off by a group of criminals and then the angry dad from That 70’s Show shot him in the head. 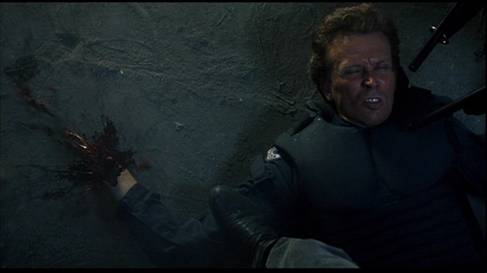 At this point, Alex Murphy, mild-mannered (we’re assuming, they give him like four lines in the whole movie, and most of them are variations of “Oh man, I’m really excited to not get my arm shot off by a shotgun today”) and rakishly-good looking officer of the Detroit police department, is dead, never to return.  However, just enough of his organic material was still alive for him to become the first of a planned force of super, robotic cops.  All they had to do was go all Nicholas Cage/John Travolta with his face and invest in a lot of Blue-Tac and boom.  The Motherfucking Robocop. 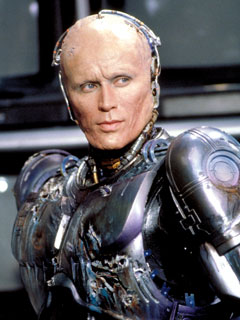 We guess you could say he was the…HEAD of his class?  Ha.  Zing.

The Motherfucking Robocop has three directives, which is in no way a rip off of anything ever written by Isaac Asimov.   These directives are to serve the public trust, to protect the innocent, and to uphold the law.  This often involves him shooting people straight in the dick.

The Motherfucking Robocop’s partner is Anne Lewis, who was Murphy’s partner before he got killed.  Because there’s no better backup for multi-million dollar Cyborg than the chick who let her last partner get killed on his first day of duty.  Speaking of those men who killed Murphy, they are an evil gang that is being paid by the evil corporate Vice-President, Dick Jones, because there’s no reason to be subtle when you’re naming your villains.  This gang of Murphy-killers is led by the angry dad from The Dead Poet’s Society and features the guy who played Satan in the show Reaper, and that douchebag doctor in ER who got his arm chopped off by a helicopter.  They do what most normal drug dealers do- purchase giant car-exploding guns and shoot them in the city.  And one of them gets dragged across a dance room floor by his hair after he tries to kick The Motherfucking Robocop in his metallic groin.

This is what your face looks like when the Motherfucking Robocop is dragging you by the roots of your hair.

Eventually all the bad guys get killed, because raining bullets upon a nearly indestructible robot is never a good idea.  The evil Vice-President gets thrown out of a window, and all the gangsters responsible for Murphy’s death are killed in ways ranging from “getting shot” to “being doused in toxic sludge, turning into a giant disfigured mutant, and then exploding when you get hit by a truck.” 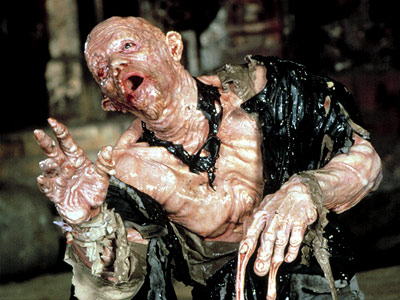 There’s also a bunch of futuristic cultural comments going on, like the privatization of Detroit’s police force, rampant crime and corporate corruption, and a guy who is famous for saying, “I’d buy that for a dollar.”  And there’s a scene where the boss from Crossing Jordan does coke off a woman’s chest before getting blown up by a bomb on the underside of his mirrored coffee table just to remind you, the viewer, that the movie was indeed filmed in the 1980’s.

By the second film documenting the glorious American killing machine (with a heart!), who you may have come to realize has the given name of The Motherfucking Robocop, the greedy corrupt corporation behind Robocop was busy trying to make a second Robocop.  Unfortunately, Robocops are much like The Highlander, or watchable The Matrix movies, in that there can only be one.

Robocop upon Robocop literally killed themselves as soon as they woke up, likely looking in the mirror and thinking, “THE SHIT IS THIS!?”  The police practice of having a group of robed officers changing, “unholy, unholy” just outside the door probably didn’t do much to prevent this.  At the same time, the streets are being flooded with a potent designer drug called Crack Nuke, because the Robocop franchise’s idea of subtlety is groping a stranger on the bus.  While Robocop 2 maintains a solid 2:1 “Kids saying fuck” to “Robotic cops” ratio, it unfortunately has far fewer dick shootings.  After spending much of the movie chasing after “Cain”, the mastermind behind Nuke, The Motherfucking Robocop gets him in a car accident that leaves him badly injured.

This being Robocop 2, and with Robocop 2 being ridiculous, of course the next thing that happens is that the inept, corrupt head of the Robocop project decided to put the drug-addled murderer’s brain in a Robocop body.  Because, really, it’s not like a giant tank fueled by a psychopath’s brain would, like, try to kill the mayor of Detroit and then cause a massive rampage inside of the city’s Civic Center, right? 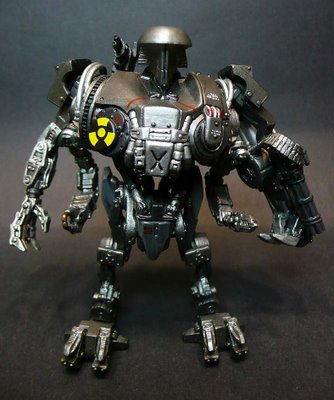 “Yup, let’s put the crazy killer’s head inside the robot with a radioactive warning on it, nothing can go wrong with this.”

Robocop 2 tries to kill the mayor of Detroit and then causes a massive rampage inside the city’s Civic Center, who else but The Motherfucking Robocop comes in to save the day, despite being dismembered, reprogrammed, and electrocuted throughout the course of the film.  Producers decided to make up for this fact by having The Motherfucking Robocop smash a jar with a brain onto the pavement.

“Hey kids, this is your brain on drugs.  Also, gravel.”

3 responses to “The Motherfucking Robocop”