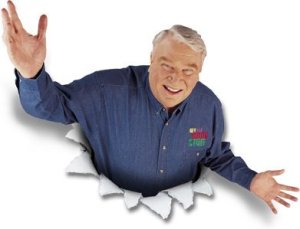 Today is an important day for the alcohol industry, the fledgling bacon loaf industry, and ad executives who trick companies to pay millions of dollars for usually ineffective commercials that, even when they’re good, no one remembers what they advertise.  But most of all, today is important…for America.

Today is Super Bowl We-Don’t-Know-What-Roman-Numerals-Mean-Because-I-Mean-Come-On-This-Is-America-Get-Your-Head-Out-Of-Your-Ass,-NFL.  Two teams that have names that have been used as insults to people face off, the Robbers versus the Homosexual Innuendos.  So to honor these teams, which have a combined 9 Premature Death Trophies between them, America Fun Fact of the Day is here to give you a comprehensive history of the Super Bowl and this year’s contenders of the number one reason for hangover induced sick days of the year. 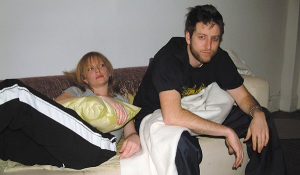 This is the look of two people who did not remember anything after the first quarter of the previous day’s game.  On the plus side, that means they missed having to see the Black Eyed Peas.

THE SUPER BOWL, A HISTORY 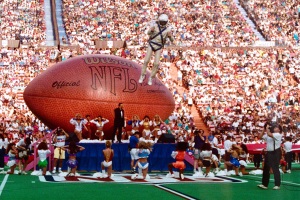 Football has a rich and bloody history.  First popularized as a collegiate sport to make Rugby “more American,” the first professional football teams began playing as early as 1892, with absurd rules like “No forward passes are allowed” and  “No shotguns allowed on the field.”  The first professional league formed in 1903, though college football was far more popular, due to its high death rate.  Under the rules of the time, a player who had to leave the field with a concussion was assessed a “Delay of game, stop being such a pussy” penalty, and a member of his squad had to be executed at random.  The rules were changed in 1905, after 18 players were killed and 159 were seriously injured during that season, and Teddy “I’m on a moose” Roosevelt reluctantly decided to change the rules to make it safer, legalizing the forward pass and forming the roots of the NCAA.  Seriously. 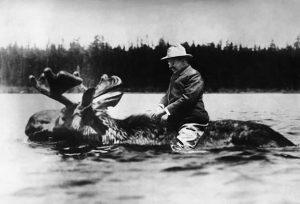 This ain’t SeaWorld, this as real as it gets, I’m on a moose, motherfucker, don’t you ever forget.

Eventually, professional leagues began to gain in popularity, and the NFL  was founded in 1920. As soon as the league formed, they were forced to fight for their supremacy.  The National Football League had such a nice ring to it, that lesser leagues like the WWPFL (Watch White People Play Football League) and the FILWPDL (Fuck It, Let’s Watch People Die League) didn’t stand a chance.  It wasn’t until 1960 that they faced real competition, in the form of the one League name that could possibly defeat them.  The American Football League.  Eventually, the two leagues decided to join forces, much like two attractive twins bickering over who gets to seduce Clive Owen before reluctantly deciding to pursue a three-way. 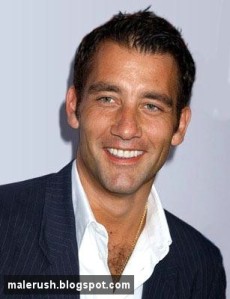 “Hey, AFFotD!  Thanks for that analogy, that was real nice of you.”

In 1967, the AFL and NFL champions met in the first ever Super Bowl, Super Bowl letter-I.  The NFL Champion Green Bay Packers defeated the AFL Champion Kansas City Chiefs 35-10, with the MVP going to legendary quarterback Bart Starr.  The Packers would go on to win the first two Super Bowls, proving that the NFL at the time was far stronger than the AFL. In fact, it was feared that the merger would not work, since the NFL was so superior to the AFL at the time.  This fear subsided when New Jersey Jets’ quarterback Joe Nameth drunkenly hit on a sideline reporter.  Also, 35 years before that the AFL’s Jets won Super Bowl Eye-Eye-Eye.

Since then, the NFL, with the AFC and NFC divisions, has been an unstoppable force in the sports world, with each subsequent Super Bowl becoming increasingly popular, until the 2010 Super Bowl between the Mannings and the Katrinas set the record for most viewed program in American history.

THE TEAM:  THE PITTSBURGH STEELERS 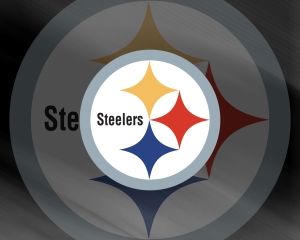 The Steelers are oldest franchise in the AFC, being founded in 1933. They have won eight AFC Championship games and six Super Bowls in their history, both of which are NFL records.  They have a long, rich history with such notable names as Chuck Noll, Jack Lambert, and Rod Woodson among their ranks in the Hall of Fame.  The Steelers like to emphasize their “Blue Collar” roots, since they pretend to be Steel Workers while actually being multimillion dollar athletes.  Recently, they’ve been recognized for their staunch defense, including this year’s Defensive Player of the Year Troy Polamalu and this year’s probably-rapist-who-got-less-negative-press-than-Tiger-Woods-this-year of the Year Ben Roethlisberger. 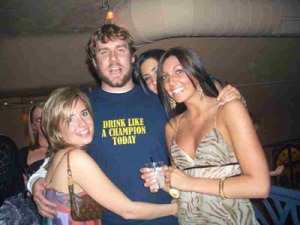 What, that drunk fat bearded man surrounded by three women with low self-esteem has been accused of rape?  Doesn’t add up.

The Steelers last won the Super Bowl in 2009, after they badgered an old man into retirement and an appearance on Dancing with the Stars.  The Steelers coasted to a 12-4 record in 2010, despite missing Troy “…He…He’s a spokesperson for…Head and Shoulders?  What the…” Polamanu for parts of the season due to injury, and their Quarterback for the first four games of the season due to suspension.  They earned a first round bye, and then defeated the equally defensive Baltimore Ravens 31-24, and the foot fetish awareness leaders New Jersey Jets 24-19.  Now, they will face their final test of the season.  Super Bowl Excellvee, against…

THE TEAM:  THE GREEN BAY PACKERS 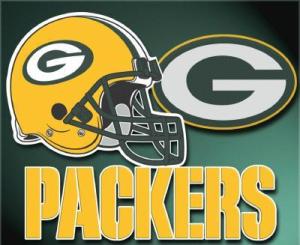 The Green Bay Packers are the second oldest franchise in the NFL, being founded in 1919.  History of semi-pro Green Bay teams dates back to 1896, and they remain the last of the “Small Town” football teams that were common in the early 20th century when you had teams that probably had names like the “Greensboro Grenadiers” or the “Handerson Hunters,” because, seriously, the early 1900’s were ridiculous.  The Packers have won 12 league championships, more than any other team in the NFL, and have won three Super Bowls, which is…more than most?

The Packers last Super Bowl victory was led by Brett “Disappointingly sized genitalia” Favre in 1998.  This year, they’re led by quarterback Aaron “If You Dig Deep Enough You’ll Find Some Shit” Rodgers and Clay “insert caveman joke here” Matthews.  After battling injuries to finish with a 10-6 in the regular season, they’re trying to become the first NFC sixth seed to win the Super Bowl.  The last team to be a 6th seed to win were…the 2005 Pittsburgh Steelers. 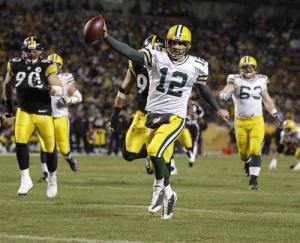 So as you drink oh so many beers, and eat oh so many buffalo wings, and enjoy this American Holiday celebrating two football teams that the majority of the nation does not root for, let yourself recognize the seeds of the event.  And these seeds…are American.