“Goddamn it, I knew Chicago would win.  Those bastards.”

~The, like, four New Yorkers who actually were upset that the New York-style hot dog was so low on this list

When we began our trek through America’s regional hot dogs, we were legitimately worried.  We had just finished writing about 11,000 words talking about long bread sandwiches, and it literally tore families apart and drove half of our staff to insanity.  And we were going to immediately follow that nightmare up with a systematic breakdown of hot dog styles?  Did we have a death wish outside of our normal “eating and drinking so much that interventions pretty much have become a part of our weekly schedule” death wish?

As it turns out, the task wasn’t quite so daunting.  Most hot dog styles follow a pretty basic blueprint.  Talking about the different regional kinds of, say, chili dogs requires about as much research as talking about various pizza toppings.  New Jersey wanted to put chili on their hot dog.  Georgia puts their chili dog in a bowl.  Pennsylvania likes to name things from Pennsylvania after Texas.  It’s not exactly academic research, but it is hot dogs, so it’s still worth our attention our affection.  And these four hot dogs remaining are the ones we love the most.  So let’s dig in.

END_OF_DOCUMENT_TOKEN_TO_BE_REPLACED

~Some of the best hot dogs

We’ve been chugging along with our hot dog series here, which has been surprisingly much less traumatic than our sandwich series.  Most regional hot dog styles exist, and even if we can’t come up with a good origin story, we can at least tell you, “this hot dog has these ingredients.  People eat them to feel happy.”  And that makes us happy.  And it makes all of us fat.  Oink oink oink, let’s eat some more hot dogs.

Um.  Okay so maybe it’s warping our minds a little bit.  But no matter.  More hot dogs to shove into the expanding maw that is your stomach! 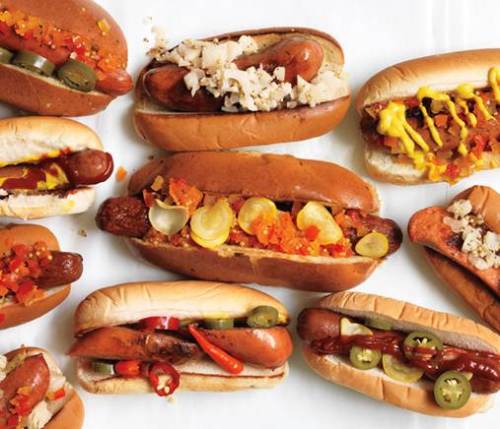 END_OF_DOCUMENT_TOKEN_TO_BE_REPLACED

A Detailed Examination of the History and Condiments of Hot Dogs

Americans truly are champions of unhealthy food, as we’ve documented time and time again.  With each American cuisine comes another foolproof method for us to gain incredible weight without having to suffer through eating anything that is not amazingly delicious.  Steaks, hamburgers, fried food and beer, all of these have been hoisted by the America Fun Fact of the Day staff as symbols of our greatness.  We are a land of temptation, and as the antagonist-character-who-is-a-thinly-veiled-metaphor-for-the-Devil-in-a-Christian-“movie”-made-by-a-Megachurch would tell us, “Sin is in”.

But one American food stands head and shoulders above all else, something that is delicious, high in fat, calories, sodium, nitrates, and suicide bomber white blood cells.  A food that, eaten alone, is already terribly unhealthy for you, but is expected to be combined with deep fried starches.  A food that should be filling, but where eating two, or even three, over the course of a baseball game is no big deal.  A food so American that every year we have competitions to see who can cram the most down our throat, and when a Japanese person dared to claim the world record, an American trained himself, Rocky style, to kick his ass by setting new world records each year.

We are of course talking about the reason why American health care is so expensive, the Hot Dog.

Just because it’s phallic does not make us gay to want to have sex with this right now.