~Some of the best hot dogs

We’ve been chugging along with our hot dog series here, which has been surprisingly much less traumatic than our sandwich series.  Most regional hot dog styles exist, and even if we can’t come up with a good origin story, we can at least tell you, “this hot dog has these ingredients.  People eat them to feel happy.”  And that makes us happy.  And it makes all of us fat.  Oink oink oink, let’s eat some more hot dogs.

Um.  Okay so maybe it’s warping our minds a little bit.  But no matter.  More hot dogs to shove into the expanding maw that is your stomach!

A hot dog is a canvas, and America is the artist.  The beauty of the hot dog and bun is that you can make wildly differing flavor profiles just by mixing up your ingredients.  You can make it rich and meaty by adding chili, you can make it complex and satisfying by dragging it through the garden, Chicago style, or you can announce to the world that you have the culinary palate of a three year old who just burned his mouth on a slice of plain cheese pizza that was far too hot by putting ketchup on your fucking hot dog.

So, we continue onward with the following regional hot dog styles that are delicious and thankfully ketchup free.  And remember, the farther along the list you go, the better the hot dogs become. 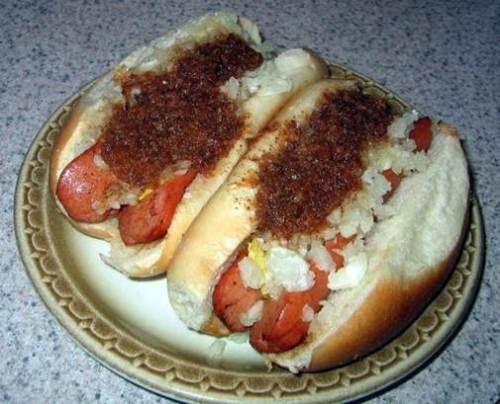 Um.  Okay then.  While some claim that the concept of a regional hot dog topped with either chili con carne or hot sauce was invented some time before 1920 in Paterson, New Jersey, Altoona, Pennsylvania claims that the first “Texas Hot Wieners” were created by Peter “George” Koufougeorgas in 1918.  Either way, Texas dogs vary slightly from region to region (hence the leeway between it having either chili or hot sauce) but everywhere you can find them (which pretty much only applies to Pennsylvania, Jersey, and a few random hot dot shops in places with no specific regional hot dog preference, like Connecticut) you can agree on one thing.  They have nothing to do with Texas, it’s sort of weird that an East Coast hot dog would name itself after Texas, since, while Texans do tend to take credit for having invented chili con carne, the chili or hot sauce used in Texas wieners have more of a Greek influence, due to Greek immigrants being largely responsible for the invention of the style (what’s that?  “Koufougeorgas” is a Greek last name?  Shocking!)

Now, we love chili dogs, but there are a surprising amount of specific types of chili topped wieners throughout this nation.  Texas wieners lose out to some of their chunkier brethren just because “chili, onions, and mustard” is pretty basic, and the following hot dogs definitely bring more to the table as far as the chili dog game is concerned. 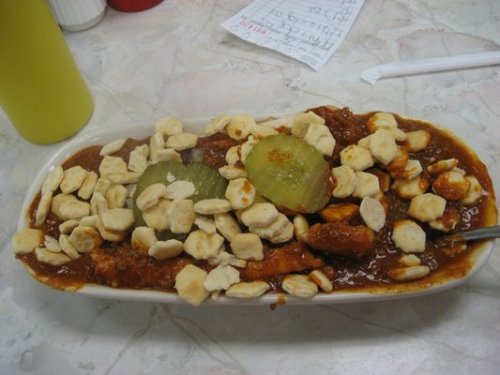 Holy hell, look at that glorious monstrosity.  If hot dogs had lungs and could breathe, we would have to imagine that the method of preparation for the Columbus, Georgia’s Scrambled Dog involves a lot of sobbing as you hold the dog down at the bottom of a bathtub of chili while muttering, “Don’t fight this, don’t fight it, it’ll be over sooner if you just let this happen, I’m sorry, I’m so sorry for what I’ve done.”  While you might assume from the name that the Scrambled Dog comes with eggs or something that’s actually scrambled, when you order one you instead will find a specific type of chili dog that has been served at Dinglewood Pharmacy in Columbus since the 1940’s.  Lieutenant Stevens (his actual name, not a rank) is credited for having perfected the Scrambled Dog while working at Dinglewood (which, despite being a pharmacy, has its own kitchen and is primarily an eatery).  Stevens started working at Dinglewood at the age of 14,  where he began tinkering with the recipe of the previously existing “Scrambled Dog.”  He’s never taken another job, and has been making Scrambled Dogs for more than 69 years.

A simple yet delicious hot dog, it’s built by taking a bun and putting it on an elongated dish or bowl shaped roughly like a hot dog bun, but deeper and longer.  Two hot dogs are added, and the whole plate is doused with chili.  That’s then topped with mustard, onions, pickles, and everything is sprinkled with oyster crackers.  Anyone can make a scrambled dog on their own using any kind of chili they’d prefer, but Lieutenant Steven’s secret chili recipe is widely regarded as the best.

Of course, this being America, and chili being delicious and unhealthy, the Scrambled Dog is only one of many types of hot dog that slathers meat stew to enhance its flavor.  We have arguably even better offerings from regional hot dogs like…

“Carolina-style” toppings originated in North Carolina, specifically the Coastal Plain and Piedmont regions of the state, and refer to any hot dog or hamburger that is topped with chili, onions, and coleslaw (with the option to include mustard).  One of the first places to sell an advertised Carolina hot dog was Merrit’s Burger House in Wilmington, which started selling Carolina hot dogs in 1958, but this particular combination of toppings has also come to fruition in Georgia, with Atlanta taking particular pride in their “Slaw dogs” while the first all-the-way dogs with slaw as a topping popped up in West Virginia as early as the 1930s with one stand (Skeenies in Charleston) claiming to have first put coleslaw on their chili dog in the 1920’s.

The only difference between the Carolina/West Virginia/Slaw dog and every other chili dog is that coleslaw is added.  That might seem to be a detriment, but you forget that coleslaw what Americans invented to make salad unhealthy, and putting it on a chili dog suddenly seems spectacularly American.

There are still a few chili dogs to address, but since we decided to rate these hot dogs based on how much we like them, we’re going to save them for our next installment, where we finally count down the four best regional hot dogs in America.  But no matter which hot dog wins out, the real winners are our stomachs.  Also cardiologists who work on retainer.