It’s almost an unwritten rule that America’s President take care of a pet during their stay in the White House, even if the only reason is that having a pet is a good way to make the man with more power than anyone else in the free world just a tad bit more relatable  And also because pets are adorable.

When this article was written, in the before times, the White House was home to two Portuguese Water Dogs, and dogs and cats are pretty typical presidential pets because they’re pretty typical regular pets.  But that’s not always the case. Throughout our nation’s histories, some presidents have decided, “I’m the President, goddamn it, I can choose any pet I want” before taking care of the best and most insane pets ever.

Here are five times that American Presidents thought a bit outside the box when it came to pets. 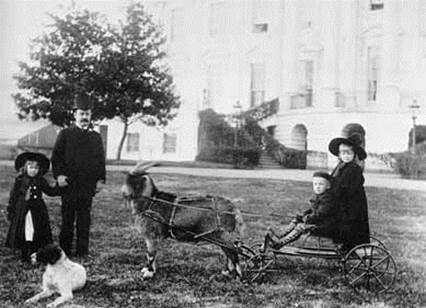 Up until now, single president has had at least one pet during their terms. While Trump doesn’t have a pet, arguably because it’s irresponsible for him to be in charge of an animal’s life, before 2020 the closest we had to a pet-less President was Andrew Johnson, the reluctant predecessor to Abraham Lincoln and one of our nation’s worst presidents (also known for showing up to his inauguration completely wasted).

Johnson didn’t actually have real pets, but he did find some white mice in his bedroom and decided to feed and take care of them, which is about the most depressing presidential pet story that somehow seems like exactly the kind of pet Andrew Johnson would keep. These following pets are way cooler than sad bedroom mice, though.

Holy shit look at that! Look at that little baby presidential hippo! It was not our intention to bring in absolute fucking sunshine into your day when we set off writing this article, but we’re so happy this ended up happening. Widdle pigmy pig. D’aww.

He also was the founder of Firestone Tire and Rubber Company, but we’re pretty sure the hippo thing is a bigger deal. Billy was an adult-sized 600 pounds (the baby hippo in the picture, we’re pretty sure, is one of his offspring) by the time he was given to Coolidge, a president best known for having a pygmy hippo name Billy.

Billy lived a pretty charmed life for a hippopotomous. Sure, he didn’t get to kill people for sheer sport like his brethren (side note, hippos are fucking terrifying irl), but he made up for his lack of actual murder by spending his life getting laid. You couldn’t really keep a full grown hippo in the White House, so he spent his time at the National Zoo.

He was given a mate, named Hannah, and went on to have 15 calves with her and 8 with a second mate, named Matilda. Currently, 58 pygmy hippos have been born in the National Zoo that are direct ancestors of Billy, who in the 1940s the press nicknamed, and we swear we’re not making this up, William Johnson Hippopotamus. William Johnson Hippopotamus! The world is fucking awesome sometimes.

Shifting gears from adorable to badass, in 1807, Captain Zebulon Pike purchased a pair of baby grizzly bears that someone somehow captured without having to reenact the only scene anyone remembers from The Revenant.  Bears in tow, he immediately thought to himself, “You know who I should give these adorable murder beasts too?  America’s first President with Asperger’s.” So that’s what he did.

Jefferson response to receiving these bears was to basically say, “Yo, dude, the fuck?”  Well, what he actually said was, “These are too dangerous and troublesome for me to keep.  I shall therefore send them to Peale’s Museum.”

The Peale museum had been opened in 1786 in Philadelphia by Charles Willson Peale, and Peale agreed to take on the bears, being told that they were “quite good humored” and didn’t eat much—he had been primarily feeding them Indian bread, which leads us to think Thomas Jefferson maybe wasn’t super great at feeding animals.

He had to wait two months to hand the bears over, however, so he kept them in an enclosure on the lawn of the President’s House, so yeah the precursor to the White House has had more bears living in it than the actual White House has, which is something that will absolutely change the moment we elect President Mike Tyson.

Having one President keep an alligator in the White House is a cute little anomaly. And for a while, that’s what it was. “Man, John Quincy Adams was gifted an alligator, and kept it in a bathtub in the East Room, what an eccentric fact about American history.” But two different Presidents with alligator pets? That’s a trend now.

We don’t know why Herbert Hoover’s son Allan had two (fucking two) pet alligators, we just know that they too lived in the White House, so we have to acknowledge the fact that America, apparently, is the kind of country whose leaders like to keep fucking dinosaurs as pets.

We’re not complaining about that fact, mind you.  We’re pretty sure ISIS would knock their shit off right this moment if we took them aside and said, “Listen, we know what you’re trying to do, but just as a heads up…we’ve had two Presidents keep alligators in their homes as pets, so what chance do you think you really have of winning this thing?” You do not want to fuck with a nation so blasé about giant teeth machines that can attack both on land and in the water. 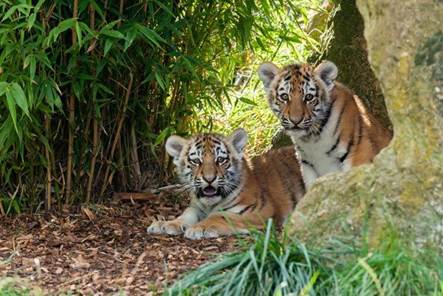 As a nice mix between adorable and terrifying, the Sultan of Oman decided to give the 8th president of the United States of America two baby tiger cubs, which sounds like the kind of gift a 13 year old boy would ask for in a moment of being awesome.  Unfortunately, he didn’t get them for long, because the Senate made him donate them to a zoo.

We honestly don’t know if Martin Van Buren had a negative relationship with the Senate, but we’d have to bet that things at the very least were icy between them. We mean, come on, if the Senate made you give away your gift pet tiger cubs, you’d have an axe to pick with them too, right? We’d be fucking furious.

Andrew Jackson’s getting a lot of revisionist flack at the moment.  We used to talk about how he “beat the shit out of the first person to attempt a Presidential assassination” and “once straight up killed a dude” or that he “held a party at the White House that anyone could attend with a wheel of cheese that was over 1,000 pounds large” but now it’s all “he was kind of an asshole” and “trail of tears :-(”.

Polly the parrot (okay so you can add “giving birds original names” to Jackson’s list of “things he was very bad at”) made the history books due to his filthy beak. Literally—one of the few references of the bird that exists stems from the fact that, during Andrew Jackson’s own funeral, the bird had to be escorted out because it was swearing up a storm and wouldn’t shut the fuck up.

Which, honestly, is just the best anecdote. It also lets us imagine a world where Andrew Jackson, as the President of America, spent time in the White House teaching a bird to curse.  He probably spent a lot of time working on it! He was probably ignoring presidential duties so he could get an hour of uninterrupted parrot-swearing lessons in.  That’s awesome. That’s so great. God bless you, Polly.