Andrew Jackson Will Shoot You in the Face

“How have you not done a fun fact about me yet?  I ought to duel the shit out of you for that.”

Every day, Americans deal with opposition, antagonization, and frustration at the actions of their fellow man.  Some of us bite our tongue and move on, choosing to take the high road.  Some of us complain about perceived injustices until they feel their grievances have been addressed.  AFFotD writers just stare at the person responsible and say in an eerily intense manner, “You’re next, fucker,” while scribbling their name down on a sheet of paper labeled Enemy’s List (admittedly, this list is often vague, with entries like, “That popped collar tool who cut me in line at Costco that one time.”)

And of course, some truly great Americans just decide to shoot their problems in the face.  Americans like Andrew “Middle Names Are For People Who Aren’t Called Old Hickory” Jackson.

Andrew Jackson was born on March 15th 1767 (probably).  His childhood reads like a version of Angela’s Ashes where the character of dysentery is replaced with the British villain in the movie The Patriot.  His parents had emigrated from Ireland two years before his birth, bringing with them Jackson’s two older brothers.  Three weeks before his birth, Jackson’s father died in what is suspiciously vaguely described by Wikipedia as an “Accident,” leaving Jackson’s mother to raise three children.

That is, until the Revolutionary War came around.

Though only thirteen at the time, Jackson had developed a healthy American sense of blood lust, and decided to join the war effort as a courier.  Another blow was sent to his family when his oldest brother, Hugh, died of heat exhaustion during the Battle of Stono Ferry.  Jackson, who had only previously been dabbling in “Hating the British more than anyone else ever” as a hobby, likely blamed the British for making it so hot on that day.

Things just went downhill from there.

Jackson and his other brother, Robert, were then captured by the British, where Andrew Jackson was forced to face enough trials and tribulations to turn even a far lesser man into an Olde Timey Batman.  After the brothers were nearly starved to death, a British Officer slashed Jackson’s face and hand with a sword for refusing to clean his boots.  Some higher powers decided that being starved and slashed at wasn’t quite enough, so during their captivity both brothers caught Smallpox, otherwise known as the, “HOLY SHIT YOU’RE GOING TO DIE” virus.  Robert was unable to survive the disease, but Andrew Jackson was able to suppress most symptoms with the radical medical procedure of making sure his body was filled to the brim with Andrew Jackson blood.  By this point, Andrew Jackson’s hatred of the British was reaching Bruce-Banner-Turning-into-the-Hulk extremes.

Eventually, Andrew Jackson’s mother was able to secure his release, with assurances that Jackson would recover (because, in the words of the doctor, “Come on…this is Andrew fucking Jackson”) and she volunteered to nurse prisoners of war on two ships in Charleston harbor.  In November 1781, there was an outbreak of cholera which ultimately claimed her life, leaving Jackson an incredibly pissed off orphan at the age of 14. 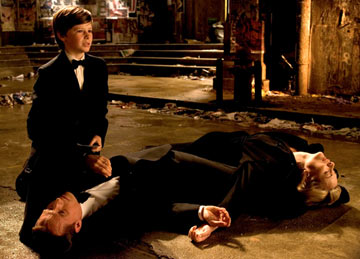 Hollywood reenactment. Not pictured just to the right of this image: England.

The fact that Andrew Jackson was the last veteran of the Revolutionary War to be elected president is very possibly the only reason why England is still a country today.

Jackson went off on his own, receiving sporadic education where he could, and eventually becoming a country lawyer on the frontier.  He represented Tennessee in the constitutional convention of 1796, and was elected as Tennessee’s U.S. Representative once it achieved statehood.

Of course, at this point, Jackson was just biding his time to take part in “Jackson versus the British 2:  Electric Boo-Ga-Loo.”  His opportunity came during the War of 1812.

“WAR,” the headlines read on newspapers.  “With the British?  Again?  Really?”  The subtitles read. “YOU CAN’T READ SO JUST UNDERSTAND THAT SHIT IS GOING DOWN” most rural papers printed (and by printed we mean, well, probably carved into a tree or something).  Jackson caught wind of this, looked over to his wisecracking sidekick who History has since forgotten and who may or may not have been Jackie Chan, and said, “This time…it’s personal.”

It was during this war that he received the so-awesome-AFFotD-cannot-embellish-upon-it-in-any-way nickname of “Old Hickory,” since soldiers serving under him said he was, “tough as old hickory” wood on the battlefield.  Jackson’s shining moment came in his defense of New Orleans.  After enlisting the assistance of local pirates, Jackson faced an overwhelming British force of 8,000 troops.  Once the smoke cleared, the British had suffered over 1,200 casualties, compared to 71 casualties, and only 13 deaths, among Jackson’s troops.  When news eventually reached Jackson that the war had actually ended two weeks before the battle, Jackson looked at the messenger with a wry smile and said, “Oops,” with a wink.  He really hated the British.

Artists Rendition of the Battle of New Orleans

While Jackson continued his political career, eventually successfully running for President in 1828, he truly had one passion in life.  Since there were no longer large amounts of armed British men for him to straight up hate-kill, Jackson decided to pass his time like many a respectable American lunatic.  By getting into dozens of duels.

Jackson only officially killed one man in a duel during his long and storied career of standing in front of angry people holding loaded weapons, which is like saying that Jessica Simpson had only slept with one person at the time of her divorce with Nick Lachey.  As a financial advisor would tell someone trying to sell pro-Gaddafi T-shirts, nobody’s buying it.  Since this was the early 19th century, and people still had ridiculous “etiquette” rules for activities designed to kill one person, many of Jackson’s duels were settled in advance, with both parties apologizing, purposely missing their shots, and then shaking hands in a way to say, “Oh, ha ha, remember that time I was totally willing to kill you?”

That was, until Charles Dickinson decided to piss off the wrong man.  Dickinson was an expert dueler, who some say had recorded 326 kills as a duelist despite dying at the ripe old age of 25.  In a vague dispute over a horse race bet, and a series of disputes that basically boiled down to Jackson going, “Bitch, you calling me a liar?” with a bit of “Bitch, you dissing my wife!?” thrown in, Jackson and Dickinson were slated to duel on May 30th, 1806.  Jackson, who was 40 at this time, knew that Dickinson was a better shot than him, so he chose to let Dickinson shoot him first. Which he did.  Right in the fucking chest.  Jackson “lightly touched his chest” as if to say, “Huh.  That’s what a bullet feels like right next to my heart.  Shit, I just accidentally wrote a line of a poem by some Emo 14 year old suburban kid in the future, didn’t I?”  He then calmly raised his gun, took careful aim, and pulled his trigger…

The gun stopped at half cock (heh).  Since this technically wasn’t considered a shot, Jackson recocked his gun, again took careful aim, and shot Dickinson right in the goddamn heart.  Historians dispute whether or not he then rushed over to the now-mortally-wounded Dickinson and shouted, “Ya BIT!” while laughing deliriously, but all agree on the final outcome.  Jackson- 1 (bullet lodged in his chest that would never be removed), Dickinson- 0 (lives left).

As Andrew Jackson became president after the 1828 election, he had a reputation for being a hot tempered, hard-partying American icon.  If there was one thing Jackson loved better than dueling, it was partying like it was 1899, and he did just that with his inaugural ball, where he held an open invitation to the American Public.  Thousands of Americans, including many poor Americans, stormed the White House like a party going too far while the parents are out of town in a generic 1980’s teen comedy.  In order to get everyone out of the White House, they put bath tubs filled with booze out on the White House lawn, luring everyone out of the White House and into Drunkville, population America.

During the course of his presidency, he had two vice-presidents, including John Calhoun, who is possibly the scariest looking man to ever partake in politics (other than Jesse “the Body” Ventura).

In fact, once Calhoun resigned from the Vice Presidency, Jackson said, “eh,” and decided to serve for a year without a VP in place.  Which might not have been that big of a deal, except for the fact that he also was the subject of the first presidential assassination attempt in this nation’s history.  When a man later found criminally insane named Richard Lawrence decided that he should appease the fire pixies and shoot the president (he may or may not have also had a crush on Jodie Foster), Lawrence fired two pistols at Jefferson…both of which misfired.  Old Hickory lived up to his nickname with his response, namely by beating the shit out of Lawrence with his cane.

After this, Congress briefly considered adding an amendment to the Constitution stating, “Do not fuck with Andrew Jackson,” but instead decided to hide those in a Dan Brown like code on the 20 dollar bill (hint: it’s basically like when you fold over the back cover in a Mad magazine).

Andrew Jackson decided to leave office as ridiculously as he came in, so after serving his two terms, he decided to have another giant party at the white house, where a 1,400 pound wheel of cheese was eaten by thousands of Americans in just two hours.  There’s so much America crammed into that one sentence that the Statue of Liberty just cried over the fact that she was made in France.

And with the end of his political career, Andrew Jackson left a rich legacy of a man who shot first while asking questions later, who was really good at killing British people, and who loved to party while leaving a mixed legacy due to his brutal policies implemented against Native Americans. So, when we celebrate America’s ability to be the best kind of insane, we always find ourselves celebrating America’s 7th, and arguably craziest, President.

4 responses to “Andrew Jackson Will Shoot You in the Face”