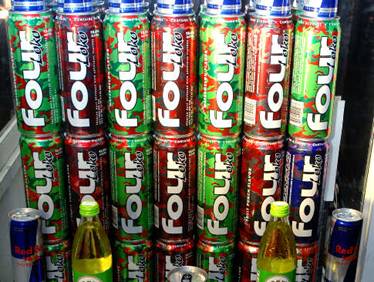 America loves alcohol, but many find that, as they get older, it’s strangely more difficult to stay awake all day while pounding vodka until the pain goes away.  That’s why we often try to find inventive ways to keep on partying.  In the 80’s, it was Cocaine.  In the 90’s, it was heroin, which of course led to a record number of liver failures because surprisingly, junkies don’t understand how heroin or alcohol work.  In the 70’s, it was probably that one poster where you could see Farrah Fawcett’s tit.  But in the 00’s and 10’s, alcohol and caffeine has been America’s upper of choice.  Anyone who has ever been to a bar where the DJ makes drink specials announcement while sounding like he works at a strip club has been exposed to various drinks involving Red Bull, and probably has ordered said drink when they started to feel themselves fading.

Of course, medical experts tend to point out that mixing energy drinks with alcohol is dangerous, and could even be potentially life-threatening.  While the government might stop Four Loko from caffeinating up their drinks, they can’t stop Americans from pouring five ounces of a Monster energy drink down the drain to top it off with vodka, so it’s time for us to bring back our Point/Counter-point series as we address…

POINT:  Of Course We Should, What The Fuck Is Wrong With You? 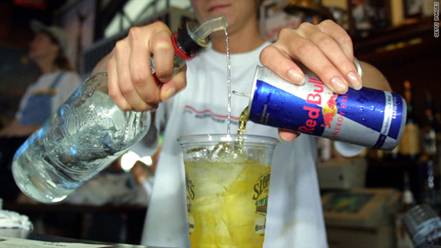 WHAT THE FUCK IS WRONG WITH YOU!?  Of course we should be mixing caffeine with alcohol.  Listen, if it’s going to give you a heart attack, well, and I hate to be blunt here, but Darwinism probably says that you shouldn’t be living anyway.  We are trying to make a more adaptive generation of American drinkers out there, and if we can mask the depressive effects of alcohol to the point that you can drink throughout the entire day while still feeling amped as hell, then of course we need to do that.

Red Bull first hit the market in America in 1997, which means that our hearts have had a solid fifteen years to get used to massive amounts of caffeine mixing with hard alcohol.  At this point, if your puny heart is crapping out from a night of pounding jaeger bombs, you clearly missed the week where the nation collectively trained for binge drinking like a goddamn Rocky Balboa montage, and that’s on you my friend, that shit’s on you.

The simple fact of the matter is that not every American is an AFFotD writer, who are just genetically superior at everything American.  While we maintain a baseline BAC of at least .15 just to make sure we never face the inevitable crash, many others tend to find that the depressive aspects of alcohol make them say shit like, “Dude, I’m too tired to keep drinking” or “Oh God, what happened, there’s vomit everywhere oh God,” and the easiest way to combat such sissyness is to caffeinate the fuck out of whatever you’re drinking.  But we’re also a proudly lazy nation, and the logistics of drinking alcohol and caffeine separately is awful.  I might as well learn how to read at that point.  No thank you.

So, yes, you should be chugging Red Bull Vodkas, doctors be damned!  I’m really just curious at this point to see who the hell we forced to do the counter-point here.

COUNTER-POINT:  Oh, Fuck, I Misread The Topic, Yeah, No, Of Course We Should What The Fuck Is Wrong With You

Ha, sorry guys, that was my bad.  Yeah, anyone who tells you not to mix caffeine and alcohol needs a strong punch in the dick.  A strong punch.