We in America like our beer like we like our women—delicious, full bodied, and able to give you very embarrassing erections when you think about them in public places.  While the increasingly American trend is to appreciate American micro-brews that are richer tasting and able to get you drunker faster, we really embrace all beers that don’t pretend to be American while being owned by goddamn South Africans or Brazilians.  Listen, sometimes you want a beer that’ll get you drunk, and get the job done cheap.  An American beer that fosters good old fashioned Midwestern alcoholism while never straying from its American origins.

That beer sounds rather delicious, doesn’t it?  Well, it sort of is.  Kind of.  Depending on how many beers you are into the night.  But no matter what, when you drink it, your lips will taste of watered down hoppy America.

That beer, of course, is Schlitz. 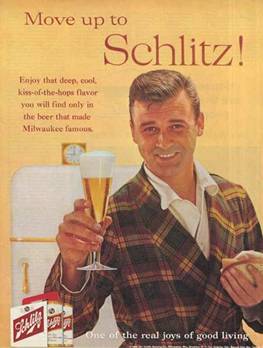 If you are looking at this picture, and were born after the year of 1965, there is a 75% chance that this man is your biological father.

Schlitz opened in 1858, but in reality has been in existence since August Krug founded Krug Brewery in 1849.  When Krug died in 1856, passing on all of his property, including the brewery, to his wife, Joseph Schlitz, a former bookkeeper of Krug Brewery, assumed management of the company before marrying Krug’s widow and changing the name of the company to the Joseph Schlitz Brewing Company, possibly while making wildly sexually suggestive gestures towards Krug’s grave.  Probably while doing that actually.

Much like the great mythical Phoenix, the popularity of Schlitz was born out of fire and ash.  Or, more succinctly, it was born out of a major American city burning to the ground in an act blamed on a woman’s cow because 19th century America was not a good time to be an Irish immigrant.  Yes, the Great Chicago Fire was not kind to several hundred crispy people, and about 3.3 square miles of Chicago buildings.  Apparently it was even less kind to Chicago drinkers, as most of Chicago’s breweries were destroyed in the blaze.

Even though Joseph Schlitz had not been born in America, the citizenship process in the constitution clearly states that “if you run a brewery in America, you become automatically American.”  With this new found American spirit, Schlitz donated hundreds, if not thousands, of barrels of beer to the city.  He soon opened a distribution point there, and built dozens of taverns and pubs that were required to sell Schlitz throughout the city (including the current popular music venue, Schuba’s Tavern).  While Schlitz died in a shipwreck off the coast of England in 1875 attempting to visit his native Germany, his namesake brewery would still only continue to grow in popularity after his death.

By 1902, Schlitz was producing a million barrels of beer every year, making them the largest brewery in the world.  Adopting the slogan, “The Beer that made Milwaukee famous” Schlitz was able to give a much needed ego boost to Milwaukee, which was starting to get sick and tired of all those jokes about it being Chicago’s largest suburb.  At the same time, they began running adds saying “When you’re out of Schlitz, you’re out of beer” which easily blows Miller Lite’s “Man Up” campaign out of the water in terms of sheer brazenness.

Over the years, Schlitz released other products, like the value-priced (which is a nice way to say “awful, but super cheap”) Old Milwaukee, and the short-lived and unsuccessful “Schlitz Light.”  Unfortunately, the 1970’s proved to be a decade that not only attempted to ruin music, fashion, and Jane Fonda’s breasts.  The 1970’s also attempted to ruin beer.  Faced with the need to meet a large volume of demand, while also trying to cut the cost of production, Schlitz changed their fermentation method and began substituting less-expensive extracts instead of using traditional ingredients.  As a result, much of the flavor of the beer was lost, and it spoiled much more quickly.

Thus the decline of Schlitz began.  In 1982, Schlitz was acquired by the Stroh Brewery Company, of Detroit, Michigan.  Sales of Schlitz continued to slide dramatically, and even the ability for bars to sell Schlitz on draft was discontinued in 2001.  Yes, Schlitz was mirroring the city of their new owners.  Much like Detroit, Schlitz was a once proud mighty titan of industry, only to find themselves falling into blight and disrepair. 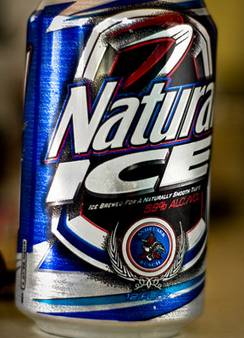 Though it could have been worse…

However, Schlitz was able to manage to pull itself up by its shoestrings, while Detroit just hired Clint Eastwood to yell at us a bunch.  With true grit and determination (or maybe just a realization that “better beer=good sales”) Schlitz, which was now owned by the Woodridge, Illinois based Pabst Brewing Company ever since they acquired Stroh in 1999, managed to rediscover the 1960’s formula of Schlitz, once again bringing Schlitz back to its former glory, and introducing this new-and-improved product throughout the United States.

In a world where our Miller Lite’s try to make us question our masculinity enough to purchase a British headquartered beer, and our Budweisers are being funneled to a combination of Belgian and Brazilian businessmen, it’s nice to know you can still sit back and enjoy an American beer, brewed in Americans, by Americans, to get Americans just, absolutely sloppy drunk.  Schlitz is one of those beers.

Schlitz is one of the good guys.