~Okay, you got us, we’re not particularly knowledgeable about advertising slogans

Pizza chains are a staple of American society.  They give us the ability to not have to leave the house when the game is on and we’re “legally” too day-drunk to drive, they afford us a convenient, no-silverware way to jam as much sodium and grease-based calories into our systems as humanly possible, and most of all, well, pizza is just fucking delicious.  And while Papa Johns might earn our favor by using the Super Bowl as an excuse to give you free pizza, and Domino’s is doing its best to stop people from calling everything “artisanal,” Pizza Hut will always hold the crown as America’s leaders in cheese stuffed saucy goodness.

Yes, Pizza Hut has been stuffing our gullets since 1958, and ever since has innovated how we look at pizza, from the stuffed crust pizza to the stuffed TOPPING pizza.  As Pizza Hut has become bigger and more international, however, they have expanded their menus to accommodate non-American tastes.  While sometimes this involves pizza products that we wish they sold here in America, more often than not, these new international Pizza Hut dishes involve terrifying reminders of why every other nation except for America (and, we guess, some of those Europe countries) considers food preparation as a challenge to see who can offend God’s culinary sensibilities the most.  Hint, it’s probably going to end up being Japan.

Pizza Hut currently is a subsidiary of the ridiculously named YUM! Brands, Inc., which is the world’s largest restaurant company that also owns and operates Taco Bell, KFC, and WingStreet.  Since America only accounts for about 75% of the world’s obesity, Pizza Huts have opened throughout the nation, like cheesy missionaries trying to convert the heathens of the world towards the Lord’s true path to myocardial infarctions.  While we support the efforts to bring such American concepts like “calling someone a pussy for patting the grease off their pizza with a napkin” to a global audience, sometimes the execution comes off less as “delicious” and more as “Frankenstein-like food monster.”  Which is why you should probably run away from the Pizza Huts in the following countries.

YOUR REACTION:  “Oh my god what is this I can’t even.”

THE MENU:  A trip to the Middle East’s Pizza Hut website (and no, they don’t get more specific than “Middle East.”  We know, it’d be like having a Pizza Hut website solely devoted to “Southeast Asia”) is sort of like a slowly-loading cheese-based fever dream.  After sorting through the pizza box meals and the “Blast-O-Pops” which come fully equipped with a mascot that we can only assume has epilepsy considering the cheese helmet he is forced to wear at all times (which makes it especially cruel that they have a Blast-O-Pops game that’s just lousy with flashing lights) you might find their limited time pizza, the Crown Crust Carnival, which we suspect might someday become self-aware and kill us all.

That is, if Blast-O-Pops man doesn’t kill us first.

What is the Crown Crust, you might ask?  Well, there are two different versions, each getting their own commercial that centers around some asshole asking for either a cheeseburger or a chicken fillet at a Pizza Hut, because he’s an asshole, and then laughing like the asshole that he is.  The Crown Crust Burger is a pizza where the crust consists of nothing but miniature hamburgers.  Just, a dozen miniature hamburgers (or, hamburger patties covered in cheese and stuffed into a chunk of the crust) chilling on the outside, because the actual act of eating your pizza should be as complicated as possible, apparently.

Terrifyingly enough, the Crown Crust Pizza seems to be constantly evolving, ever since introducing a pizza in 2010 that alternated between meatballs and balls of cream cheese in the crust.  Clearly it’s just a matter of time before we are the special ingredient.  Or, like, giant chunks of fried butter.  Either way, the Crown Crust Pizza is going to kill a lot of people.  But just because Pizza Hut apparently has some weird perverse obsession with giving an entire region of the world acid reflux, other individual nations also find themselves staring into a terrifying Pizza Hut menu when trying to decide the best way to forget the definition of the word “gymnasium.”  Which of course brings us to…

YOUR REACTION:  “If I wanted to eat escargot at a pizza hut, I’d just dig out my appendix with a blunt spork like a goddamn adult.”

THE MENU:  We’ll start off by getting this off our chests—Pizza Hut in China is fancy.  Like, dayumn.  Looking at their website you can see lamps, posters with cursive lettering saying “passion” and “gusto,” and of course, porcelain plates with actual silverware.  But it’s also China, so when it’s not busy owning a majority of our nation’s debt, they’re busy terrifying us with their unearthly powers.  Which is probably why their pop-up for Pizza Hut Delivery involves a well quaffed man floating in the air while on fire and levitating a pizza. 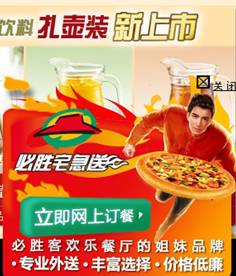 Right off the bat we’re going to give our one main compliment to Pizza Hut in China before we delve into the rabbit hole that is China’s insane Pizza Hut Menu.  The fact that they serve wine at their Pizza Huts is pretty cool, and America needs to look into that.  The only thing we can think of that’s more delicious than a stuffed crust pizza is a stuffed crust pizza while drunkenly yelling at your family that you’re totally cool to drive.  But once you get past that, Pizza Hut’s Chinese menu devolves into insanity.

Listen, we’re not insensitive to cultural dietary requirements (ha, who are we kidding, we absolutely are).  When 90% of the population in many Asian countries are lactose intolerant, you might have a hard time selling them a disk of saucy bread that’s covered in enough mozzarella that the oven can legally be considered a dairy cow while the whole thing is being cooked.  That being said, there are plenty of options to help lactose-intolerant populations eat Pizza Hut, ranging from lessening the amount of cheese used to just saying “Man the fuck up” and forcing it down their Chinese freedom-hating gullets.

So yes, you can order (gross looking) pizza from China’s Pizza Hut.  But instead, people will order Escargot, octopus with quail egg, and giant towers of vegetables that they construct with the engineering precession of a bridge collapse.  Wait, what?  That’s not a menu, that’s what a food wholesaler shouts out when he’s having a stroke.  There’s also a bread covered clam chowder available, which is apparently a popular dish, and… you know what?  We’re done, China.  You might turn out Pizza Huts into this monstrosity when you invade in 2023, but until then we’ll stick to our delivery pizza and occasional-pasta-dish-that-no-one-really-orders, thank you very much. 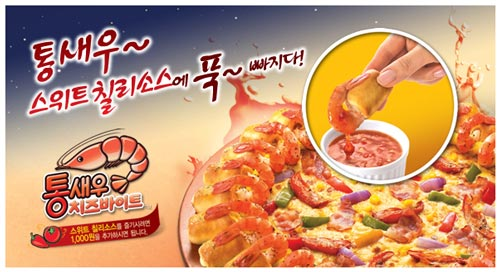 YOUR REACTION:  “From Hell…It’s from hell…”

THE MENU:  Asia really goes to town when trying to come up with the most terrifying ways to defame our favorite foods.  South Korea (you might know it as the economically-successful-not-ruled-by-a-crazy-person one) at least spares us the mental overload of China’s Pizza Hut offerings, but they more than make up for it by giving us all sorts of terrifying pizza creations.  Like that image above which, yes, is a pizza with dozens of shrimp lining the crust, like some sort nightmare-fueled rendition of “Under the Sea.”

It only gets worse from there.  South Korea joined Taiwan in deciding to sell the “Mizza,” a rice pizza…

Which might just very well be the most disgusting thing we’ve ever seen.  It’s like Korea specializes in inventing pizzas that you would hope to find on an episode of Fear Factor.  Or how about the “Rich Gold” which is a sweet potato Mousse-filled crust?  We’re going to stop digging into Korea’s pizza options before we end up stumbling upon a pizza made out of fingernails or something.

YOUR REACTION:  “You guys, there are TWO crusts filled with cheese!  TWO!  YOU GUYS!”

THE MENU:  Yeah, we have no problem with Mexico’s Pizza Hut.  It’s pretty much America’s, only they made a pizza with two different crusts that were stuffed with cheese, and put a dipping sauce in the middle.  We’re so mad that this doesn’t exist in America.  Just…so, so mad.

YOUR REACTION:  “GODDAMN IT JAPAN YOU’RE DOING IT WRONG!”

THE MENU:  We’re pleasantly surprised that Japan hasn’t made a pizza that has something still alive as it’s topping, but that’s about all we can say.  Where do we even begin?  We have the pizza seen above, which comes with ketchup and maple syrup as dipping sauces and packs 646 calories per slice (and yes, those are mini hot dogs lining the outside, and yes, tiny little hamburgers placed on top of the pizza along with tomato and edamame).  There’s also the Winter Double King, which has ingredients such as king crab, mayonnaise-filled shrimp, broccoli, egg, and the nightmares Anthony Bourdain has after a bad acid drip.

We can also embrace the Golden Fortune, which has crab stick, pineapple, lime, and a very strong odor of racism if a white dude was the one who came up with its name.  Or the Mini Dog pizza, with cocktail wieners arranged on top of the crust facing inwards towards a pizza that’s been drizzled in what looks like whatever mustard has to call itself when it informs its new neighbors about its status as a sexual offender.

Listen Japan, we’ve said it before and we’ll say it again.  When you’re partially known for having created Godzilla after tinkering around with an iguana for too long, you should probably stop trying to turn American food products into monstrosities.  Because eventually they’ll turn on you.  And all you’ll hear from us, is “we told you so.”  And then we’ll eat a pepperoni pizza.  Because that sounds like it would hit the spot right now.

This entry was posted in Pizza Pizza, Strange Foods, The Rest of Them and tagged America, Foreign Countries, Japan, pizza, Pizza Hut. Bookmark the permalink.