The History of Chicago-Style Pizza

“That’s not a pizza, it’s a damn casserole!  I feel strangely threatened when I see different versions of a food my city’s supposed to be known for!”

At its heart, pizza is just cheese, dough, and tomato sauce, topped with whatever additional ingredient you want.  Inherently, pizza exists to breed creativity and adaptivity.  In the hands of madmen and foreigners, this culinary freedom can be disastrous, but in the hands of true Americans, this can create an unhealthy, delicious American meal glorious enough to single-handedly keep additional-belt-hole-punchers in business.  One of the most glorious examples of this, of course, is the Chicago-style pizza.  Less of a pizza pie, and more of a pizza cake, Chicago’s deep dish pizza gives you as much fat, grease, and cheese as you’d expect to find from a city that’s primary gift to the realm of fine cooking involves hot dogs and roast beef dipped in its own juices.

So with a casual, “Get over it, yes, we get it, you guys are proud of your pizza, and you have good pizza places, but stop acting like you’ve done anything original to the style just because you use special tap water to make the crust” to our now-livid readers in New York, AFFotD is proud to present you with…

The History of Chicago-Style Pizza 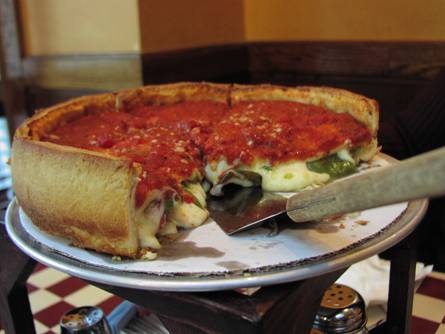 For those readers who have never been fortunate enough to taste Chicago’s take on pizza, you might look at a single slice of pizza and consider it more of a “snack” than a “meal.”  Sure, if you eat enough slices you’ll get full, but you can say the same thing about Kraft singles or thin mints.  Chicago-style pizza (we’re going to ignore Chicago-style thin crust, because meh) as you know it is a deep dish “stuffed” pizza pie, with crust up to three inches tall at the edge, and ingredients piled up to a similar height.  While most pizzas are layered with the cheese on top, Chicago-style pizza makes a thin-to-medium-thick dough crust before putting ample amounts of cheese and ingredients in the middle, dousing the whole thing with chunky tomato sauce at the top.  We don’t have the nutritional information on hand for how many calories each slice has, primarily because when you search for, “How many calories are in a slice of Chicago-style pizza?” google comes back with a youtube video of George Wendt laughing at you.

The Chicago-style deep-dish pizza was invented at Pizzeria Uno in 1943, and most accounts claim that Uno’s founder, Ike Sewell, came up with the recipe.  Pizzeria Uno was able to turn the deep-dish pizza into such an important staple that the restaurant had to open up a second location, Pizzeria Due, a block away to manage the overflow.  Since then, Uno’s has become a national franchise, which just means “You can go to a place called ‘Uno Chicago Grill’ in Colorado or Texas but they’re not the same at all, and if you’re going to eat there you’re doing yourself a disservice not eating at one of the Chicago locations.”

Strike one: this looks like an Applebee’s.  Strike two: it’s in New Jersey.

While it is widely known that Uno’s originated the deep-dish Chicago-style pizza, a 1956 Chicago Daily News asserted that the actual inventor was Uno’s original pizza chef, Rudy Malnati, the father of Lou Malnati (more on him later).  In the 1970’s, an second Chicago-style of deep dish pizza was invented, the stuffed pizza.  An American interpretation of a recipe for an Italian Easter pie called scarciedda, tends to be deeper than deep-dish pizza, with several layers of dough encircling the cheese and ingredients, all covered with a thinner layer of tomato sauce covering it.  This style tends to use a more bready crust as opposed to the oiled-and-fried crust seen on many other deep-dish pizzas.  While the preference between deep-dish and stuffed Chicago-style pizzas is a hotly debated topic, it’s still widely accepted that both styles are delicious, and each slice is the equivalent of eating four thin-crusted pizzas worth of cheese and topping goodness.

Yes, drooling is the proper response.

Of course, Chicago has a handful of deep-dish and stuffed pizza pioneers, and so we’re here to break down the “iconic” pizza locations of Chicago, in no particular order, with a list chosen by one of our Chicago writers who has probably not been to your favorite pizza place, and who is exceedingly hungover right now.

As mentioned above, this is the one that started it all.  Ike Sewell and Ric Riccardo (no relation to Ricky) opened the restaurant in 1943 in Chicago’s River North neighborhood, originally wanting to open a Mexican restaurant (Sewell eventually did, albeit 17 years later).  In response to demand, Pizzeria Due (pronounced do-eh) was opened in 1955 just down the block to take overflow customers, and both locations take focus on their bars, which follow the tradition of Chicago’s speakeasies.

Uno’s pizza uses a cornmeal crust that sets it apart from many deep dish pizzas that have since come, but the primary reason it’s on this list is its role in the creation of this glorious pizza style.  Like the Sex Pistols and punk music, they did it first, and while many since have done it better, they still deserve credit where credit is due. 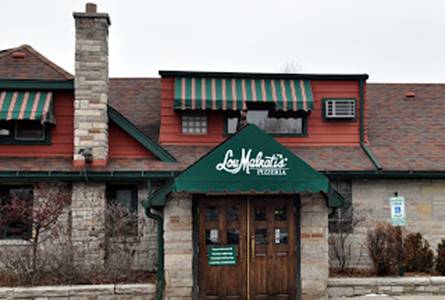 Of the Chicago-style pizza chains that base all of their stores in Illinois (we’re looking at you, Uno’s), Lou Malnati’s is the one most commonly listed as a “favorite” of Chicago pizza fans.  Originally founded in Lincolnwood on March 17th, 1971, Lou Malnati’s has expanded to more than 20 locations in the Chicagoland area.  Lou Malnati worked with his father to co-manage Pizzeria Uno in the 1950s before he decided to open his own restaurant.  The pizza style mirrors that of Pizzeria Uno’s, with the cornmeal crust of the former replaced by a thin, flaky butter crust.  Instead of using crumbled sausage, Lou’s places whole sausage patties throughout an entire layer of the pizza, ensuring each fork-and-knife-necessitating bite will have a healthy hunk of meat in there.

Lou’s is also the best pizza to send to Chicago expats who are desperate for a taste of home, since they will actually freeze their pizzas and mail it to you for what is sure to be not at all obscenely expensive. 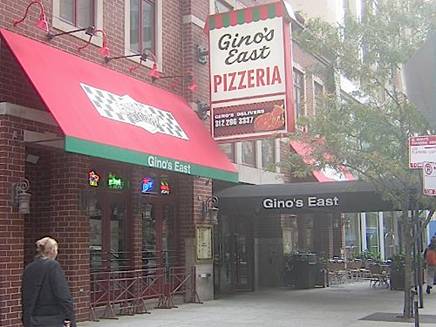 Gino’s East was founded in 1966 by two taxi drivers, Sam Levine and Fred Bartoli, with their friend George Loverde, who worked in the grocery and meat business.  It’s since established itself as one of the best places to get a pie in the city of Chicago, despite having moved from its original location before re-opening the same location in 2007, much like the Oakland Raiders.  Gino’s is known for their more bready crust, as well as their tendency to encourage people to write or carve their names or other messages onto the wooden interior walls.  While we question the thought process behind “making vandalism a part of your brand” we have to admit they make a pretty damn good pizza, with ten locations in Chicago and its suburbs, and one in Wisconsin because fuck you people from Illinois we know you will totally overpay for familiar food if you’re on vacation at Lake Geneva.

Giordano’s is perhaps the most popular of the stuffed Chicago-style pizzas, and it definitely is the Derrick Rosiest.  Because it’s a stuffed pizza, as opposed to a deep-dish, their pizza has more cheese and toppings, and while it’s sacrilegious to eat a pizza without a protein, Giordano’s mushroom-and-spinach stuffed pizza is actually one of the few pizza orders without meat that doesn’t enrage AFFotD staffers.  They claim that they invented the stuffed pizza, but their origin story was suspiciously familiar to the story of Nancy’s Pizza, which opened the same year.  Of course, Nancy’s doesn’t get a spot on this list, because most people who live in Chicago usually don’t go all the way to Harwood Heights to get good Chicago-style pizza.  Listen Nancy’s, if you want to be on a list of go-to Chicago-style pizza chains, try opening more than one restaurant inside the actual city, okay?

Giordano’s has 13 locations in Chicago, and another 30 in its surrounding suburbs, meaning you’re about as likely to find a Giordano’s in Chicago as you are to find a Wendy’s.  By the way, one of the reason our staff loves Chicago so much is that you can say “it’s easier to find a deep dish pizza in this city than a fast food restaurant.”  Beautiful. 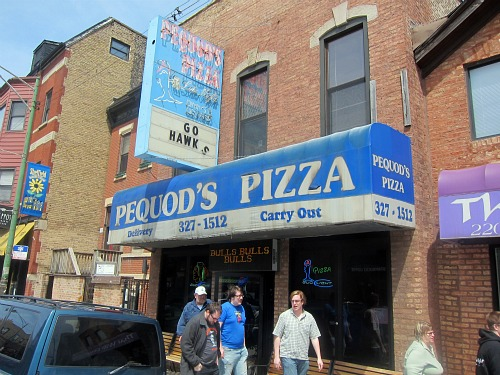 Pequod’s Pizza is one of those pizza places that hasn’t reached the same heights as the chains listed above, but it does add its own unique twist that makes it a Chicago mainstay.   Pequod’s is best known for “the famous caramelized crust” which is made by spreading a thin layer of cheese along the outside of the crust before baking it, giving a burnt appearance that adds a chewiness to the crust of the pizza.  The crust is thicker than most deep-dish pizzas, which limits the amount of toppings you can cram into your arteries in your quest to do your best impression of a Chris Farley heart attack, but anytime you can get rid of any cheese-less spots on your pizza, we have to give you credit for it. 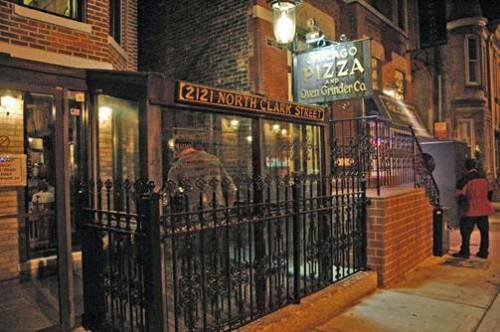 Oven Grinders primarily makes this list because it was the name-dropped pizza place of choice in The Chicago Code, which was one of the more underrated crime dramas of the past decade.  Operating in the basement of an old house, after a fire the building was rehabilitated in 1972, with Oven Grinders opening under the name “The Chicago Pizza and Oven Grinder Company.”  While they advertise themselves through their oven grinders (giant Italian sandwiches baked in their ovens) they’re perhaps most famous for their Pizza Pot Pie, an upside down pizza concoction that is part Calzone and part stuffed pizza. A bowl is lined with cheese, sausage, sauce, and whole mushrooms before being topped by a dome of dough, where it’s baked.  The pot pie is then flipped over, the bowl is removed, and what’s left is a filling, cheese-filled pizza that’s shaped in a half-sphere, making it by far the best non-flat pizza the city has to offer.

Of course, there are dozens of other authentic and delicious (read as, gloriously unhealthy) pizza places, and our Chicago readers no doubt are upset that their favorite isn’t on the list.  Well, let us know if that’s the case.  It’s not like Americans would ever turn down incredibly unhealthy pizza being offered to them.

4 responses to “The History of Chicago-Style Pizza”