This Isn’t Poison: Food and Drinks With Skull Designs

“This is the tale of Captain Jack Sparrow.”

Ever since first reading Treasure Island as a child or, more likely, seeing Hook, Americans spend their childhood surrounded by pirates.  While today piracy seems like an ignoble, cowardly profession, we still are drawn to the classic pirates of yore; the Blackbeards and Black Barts we heard wildly exaggerated stories about.  Hand-in-hand with this romanticized image of people who actually were often very brutal murderers is the Jolly Roger, or the skull-and-crossbones flag that they would fly to identify themselves as pirates.

Since that point, the skull-and-crossbones have become an iconic part of our history, and putting a skull on a product has become a widespread way to tell Americans that something is either badass, poisoned, or was purchased at a Hot Topic.

Today, we’re going to go into the products that Americans consume that have incorporated the skull into their packaging.  Because nothing tells you to put something inside your body better than a bleached human skull and the words “DEATH,” right?

This Isn’t Poison: Food and Drinks With Skull Designs

Typically, putting a skull on the label of your product is a pretty efficient way to say, “This is poison, do not drink the ammonia, please for the love of God.”  Apparently the FDA prefers to keep things that way, so some of these products either aren’t from America (don’t worry, it’s only one, and it’s British, so it at least speaks American) or cannot be sold in the states legally (sorry, Black Death vodka).  Either way, we’re going to take some time to honor these products, because some marketing genius decided, “You know what would be a great way to sell this product?  To remind our customers of their eventual demise that this product likely is hastening!” 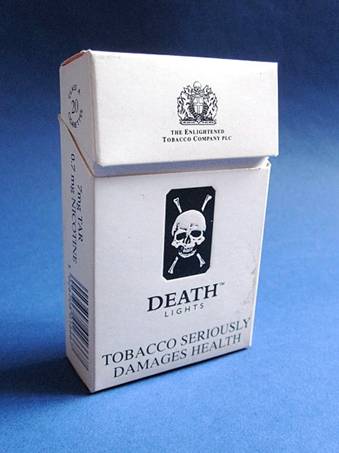 It’s not surprising that American tobacco companies haven’t decided to adopt the “Let’s put a skull-and-crossbones on our products” approach, since this packaging gets uncomfortably, well, real.  Death Cigarettes were debuted in England in 1991, touting themselves as free of chemical additives, while also making a point that “No, seriously, what we’re selling you is going to kill you.”  While it’s meant to be a little tongue-and-cheek, you’d have to think people who are trying to quite for health reasons, but are having a hard time of it, might feel a little uncomfortable with promotional material saying things like “Let Us Be The Nail In Your Coffin”, “The Grim Reaper Don’t Come Cheaper”, or “Ha Ha You’re Addicted To This And No Matter How Hard You Try Cigarettes Will Be What Takes You From Your Family.”  We made up that last one.  We think.

This is the most awkwardly literal use of a skull in food/beverage packaging on this list, but it’s also the one that no longer exists.  By 1995, sales started to decline, and the Enlightened Tobacco Company, which manufactured these awkward sin sticks, went out of business in 1999.  We have no idea how that could have happened. 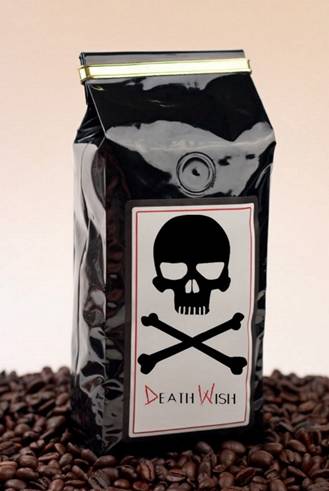 Whereas cigarettes more likely than not will eventually end up, you know, killing you, naming your self described “World’s Strongest Coffee” “Death Wish” at least comes off cloyingly tongue-and-cheek.  Death Wish decided to combine their gimmick of “our coffee is twice as strong as normal brews” with “BEHOLD YOUR EVENTUAL DEMISE SOME DAY ALL THAT IS LEFT OF YOU WILL BE WHAT YOU SEE STARING THROUGH THE HOLLOW SOCKETS OF OUR LABEL.”  Or, you know.  Something like that.

We sort of get it.  Coffee’s black.  You drink it when you’re feeling like death.  And there are dozens of skull mugs and pictures of skulls made out of coffee foam out there, so it’s not exactly something that’ll scare off your daily coffee drinker.  Plus, it’s coffee.  It’s literally the one product we use regularly when we’re not people.  The list of products that we use when we’re so out of it we don’t give a shit what the label says is pretty much coffee, shampoo, and shaving cream.

Either way, this product isn’t one that you’d actually confuse with poison.  Unless there’s a poison out there that’s just seeds that you have to grind up into a powder before you administer.  What’s that?  That’s pretty much how cyanide works?  Well shit. 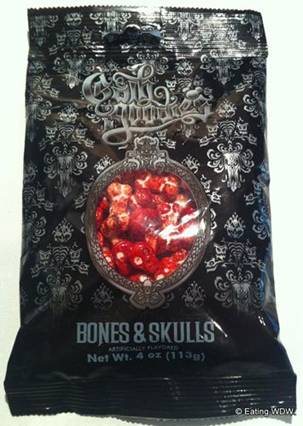 These products are both innocuous and confusing.  On one hand, it’s not surprising that you can find candy corn and lollipops shaped like skulls without too much difficulty—we’ve been shaping candy like strange things ever since bachelorette parties started demanding penis-shaped-everythings.  On the other, teaching kids to suckle on human skulls seems more like future-zombie-training than anything else.

Also, if you look at the bones and skulls candies in the picture above, you might be surprised at what you see on the nutritional label.

It’s probably safe to assume this is some attempt by Disney to cash in on Pirates of the Caribbean, because it’s not like everyone in the world has paid more money to watch those movies than we did to send Curiosity to Mars or anything.  Oh right.

American hot sauce packaging pretty much can be summed up with the phrase, “Come on, I dare you.  What are you, some sort of fucking pussy?”  That’s how you end up with hot sauces with such classy names as “Ass Reaper”, “Beyond Death”, and “Satan’s Blood.”  That being said, having a skull-and-bones based logo is downright fancy when you have a competitor called “Wet Fart.”

Also, if you’ll humor us for just a moment.  Heh…ass reaper.  Tee hee.

When it comes to liquor, there are two different vodkas on the market that have decided to embrace the edginess of a neutral spirit that wasn’t readily available in America before 1940 by incorporating a skull into their design.  The “can’t be legally sold in America” one is Black Death Vodka, with a label that has a charming skull wearing a top hat since just because you don’t have any skin or muscle or tendons doesn’t mean you can’t be fancy.  The addition of the hat is probably why they’re hinting at “resurrecting” themselves after they were banned by the Bureau of Alcohol, Tobacco, and Firearms in 1992, either for being made out of gunpowder, or for looking too much like poison by having a skull on their label.

Crystal Head Vodka takes a much more artistic (or terrifying) route, as you can see in the picture above, by pouring their high proof liquor into a crystal skull.  While it likely is a gimmick to sell a mediocre vodka at a premium price because of unique packaging (we’re looking at you, vodka in a bottle shaped like a gun) it’s at least much less distressing than drinking vodka poured into an actual human’s skull, preferably in a graveyard while a family is paying respects to a nearby grave.

Oh God.  Why did our minds even go there.  This topic has taken us…into some dark places.  Let us never talk of it again.

2 responses to “This Isn’t Poison: Food and Drinks With Skull Designs”