England’s Hot Dog Stuff Pizza: Would You Like a Side of Nitrates With That?

Every so often our readers will alert us to something that deserves the attention of the average American.  This can be an article, a Wikipedia entry of some sort, or one time it was just a piece of parchment with the words “I love you Jodie” scribbled over and over in blood.  Seriously, John, get over it, she’s not even into dudes.

What we’re trying to say is, sometimes we’re given an article that says, in its headline, everything we would be able to say on the topic.  But does that stop us from going ahead and writing on that topic anyway?  No, of course not, this is America, to us redundancy is just a word that we don’t understand because it has more than three syllables in it (is it, like, a type of cheese?)

The article in question comes from Gizmodo, and states succinctly, “I can’t believe this hot dog stuffed crust pizza isn’t American.”  We can’t either, Gizmodo.  But now we need to know everything that we could possible know about…

England’s Hot Dog Stuff Pizza:  Would You Like a Side of Nitrates With That?

Of all the countries that don’t end in “Erica” we’d expect a pizza place from other than Pizza Hut to sell something as monstrously unhealthy as a hot dog stuffed crust pizza, we didn’t expect England to be the ones to have the stones to go through with it.  This is England we’re talking about here, they haven’t made anything worth stealing and claiming as our own since we needed to find a melody for “The Star-Spangled Banner.”  But here it is, in all its arterial-hating goodness.

Yes, Pizza Hut’s UK website lists the hot dog stuffed crust as one of the pizza options.  While we know what we get (pizza, with a hot dog in the crust) we are left with tantalizingly few details, and more questions than answers.  So we went straight to the source.

While most of our employees are expert hackers, all of our employees are always drunk, so they’re pretty useless in that regard.  Nevertheless, we decided to try to “order” a pizza, so we could at least start to understand what this pizza would entail.  As you can see above, if we get a standard Hot Dog Stuffed Crust, and order the “Meat Machine” (because even in England, you know, America) it’ll set you back roughly 20 Squiggly L’s.  But it wasn’t easy.  First, in order to order we had to find the “postcode” of a place that’s actually, you know, in England.  Thankfully, Pizza Hut’s  “Find Your Postcode” section was particularly helpful.

Having successfully entered what apparently is a valid address, and choosing one of the locations, we were asked when we wanted to pick up our pizza (we chose the latest time available, 21:45, which we guess is British for “evening”).  Still tricky, not every Pizza Hut offers the hot dog stuffed pizza, so we had to click through three stores before finding one that met our needs.

After finding a pizza that allowed us to use “Hot Dog Stuffed Crust” as our “base,” we did some quick comparisons.  The Italian and Pan pizzas are the cheapest, while the Stuffed Crust, Cheesy Bites, and Hot Dog Stuffed Crust are more expensive, though those three all cost the same, which seems strange to us.  Having a hot dog in your crust must be more expensive than cheese.  But then again, this is England.  If you ever try to make sense of English culinary methods, half of your taste buds immediately die.  That’s a fact.

Looking at the available toppings, you can see there are areas where England is terrifying.  Mainly, who the hell puts sweet corn or tuna on their pizza?  Tuna on pizza?  What the hell, England?  They also give you the option of using BBQ Sauce instead of tomato sauce, because gross.  Fucking gross.

The most expensive Large Hot Dog Stuffed Crust pizza would be 10 ingredients added, with double cheese.  Because this is America, we made our pizza a double cheese with tomato sauce that had chicken, ham, Cajun chicken, pepperoni, spicy minced beef, spicy pork sausage, steak, anchovies, jalapenos, and crispy bacon.  All told, that cost 29 squiggly L’s, which is, uh, let’s say fifty bucks in American dollars.

While we’re pretty sure we just created the pizza version of a monster, we were a little confused by the fact that Pizza Hut UK clearly took this order as a reason to weirdly hit on us. 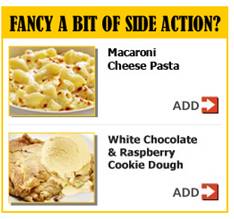 We added the Mac and Cheese for another 3 squiggly L’s.  When they said we had to register an account to put in the order, we decided we were too drunk to look up fake British phone numbers, so we let the pizza rest.

But we were still left with oh so many questions.  These questions are listed below in ascending order of the degree that they make us want to shake a Pizza Hut delivery boy while screaming, “ANSWER US DEMONS WHAT FOUL MAGIC HAST THOU WRAUGHT ON THIS PIZZA’S CRUST!”

What The Holy Hell Is Mustard Drizzle?

Apart from being added to our hall of fame for “phrases that (probably) aren’t pornographic, but sound like they are,” what is the role of mustard drizzle?  The pizza comes (with a free!) mustard drizzle, and they just toss out this combination of words and hope that we’ll know what they’re talking about.  Are they drizzling mustard on the crust so it would go well with the hot dog part of it?  Wouldn’t that make it an incredibly messy pizza to eat?  Wouldn’t it taste awful if the mustard accidentally mixed with the cheese or the sauce?  What are you, mustard drizzle?  WHO DO YOU WORK FOR!?

How Many Hot Dogs Are In Each Pizza? 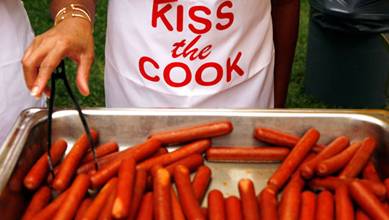 There are so many logistical issues that you know someone had to sit down and iron out.  No matter what, the hot dogs in the pizza have been curved to contort along with the crust.  What remains to be seen is if we’re dealing with a situation where someone made one, giant hot dog circle, or if a series of regularly sized hot dogs have been put, end to end, in a circular fashion?  Is there one hot dog per pizza slice?  Holy shit, just by asking that last question half of the free calorie counting websites on the internet just shut down and have been replaced by a screen that reads “WE GIVE UP.”

3 responses to “England’s Hot Dog Stuff Pizza: Would You Like a Side of Nitrates With That?”