“Whatever, I’m so over the three wolves shirt.  I need something else to ironically show my derision of the trailer park culture.”

We’ve previously informed you of the powers that Americans receive while wearing a shirt that has wolves on it.  The math equation that determines the abilities you receive in relation to the amount of teeth you have missing and the number of wolves on your shirt is impossible to figure out, because if you’re wearing a wolf shirt you have no business trying to learn what the word “math” means anyway.  If you’re wearing any shirt with wolves on it, every moment you waste saying words that are longer than two syllables is a moment you should be using to discover new types of saturated fats.

Yes, the three wolves howling at the moon shirt is the American equivalent of a Superman costume, or a undershirt soaked through with chicken grease.  It’s a uniform you can use to declare who you are (American) and what you stand for (America) and what your favorite big word is (xenophobia).  But we live in a time where ideals and fashions change at breakneck speed, so it shouldn’t come as a surprise that America has outpaced itself in the “ridiculous animals on shirt” department.

That’s right.  It’s the Big Face Animals shirt collection by The Mountain.  We know, you’re so happy right now.  Time to dive in and pick out the best, most gloriously American shirts that you know you’re going to spend twenty dollars that smells suspiciously like possum on.

There’s something about having a giant animal face sticking out of your chest that appeals to the Alien lover in all of us.  And it’s even better to make your body into a torso-sized wrinkled dog’s head.  For example…

The website doesn’t have models wearing these shirts because if anyone weighing under 250 pounds were to put on this shirt, their body would legally be declared a paradox and they’d become trapped in glass panes like the Kryptonians in Superman 2.  The only sizes that these shirts come available in are “XXL,” “3XL,” and “laughter.”

This shirt is actually one of the more “subtle” ones available in this collection, but it’s not the most subtle.  And by “most subtle” we mean “most likely to remind people watching you where your nipples are due to the largeness and prominence of these terrifyingly eyes.”

It is impossible for those eyes to be located anywhere but your nipples.  This shirt design is called “Full Moon Eyes” but it’s known better by its full name “Full Moon Eyes That Will Focus On Your Nipples No Matter How Large Your Man Boobs Are.”  If you stare into the eyes of this shirt for more than thirty seconds, every vegetable in your fridge turns into cheeseburgers and light domestic beer.  The designer of this shirt once had a dream where a wolf fucked the moon and made a child, and it was this shirt.  Now it’s the only thing he sees every time he closes his eyes.  It won’t stop haunting him.  It won’t stop haunting him. 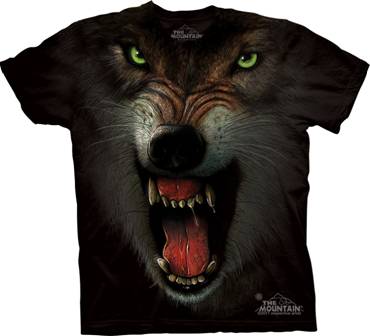 This design is just called “GRRRR” which sort of makes us think it was designed by some sort of wolf-worshipping Rain Man.  Maybe they decided to go with “GRRRR” as the name for this shirt because it’s a lot easier to type that out instead of the sound of someone shitting themselves out of fear.  Don’t they realize how dangerous it is to make these shirts large enough for 300 pound men to wear them?  When we asked the company how many people purchasing this shirt are going to be accidentally shot by panicked hunters, the head of the company just said, “All of them” and started laughing uncontrollably for the next twenty minutes.  This shirt should not exist in a country where it is legal to own firearms.  We’ve already destroyed 3 computer monitors after trying to enlarge this image.  We just kept smashing away screaming, “DIE!  DIE HELL BEAST!  DIE!”  We were all crying and we’re not even ashamed to admit it.

Thank God Satre is dead.  If there’s one that would have inspired obnoxious French existential literature, it would be this image.  The longer you stare it at the more questions you have and the fewer answers you’re left with.  Why would you have the “Beware of Dog” sign on the fence when the six-foot tall dog in question has an assault rifle and a handgun.  Somali landmines are better marked.  If anything, this sign should be anywhere within, oh let’s say a bullet’s radius from the fence, and it should read, “Beware of GUN TOTING DOG like half a mile away.  Seriously, it has guns.  Plural.  Guns.  Just turn around and get out of here.  Don’t say we didn’t warn you.”  Also, what is the deal with the leather jacket?  Doesn’t that defeat the purpose of him having fur?  Since he’s got black fur, which is both the same color as the jacket and should also keep him warm, it only stands to reason that he’s wearing the jacket for…motorcycling?  God, we wouldn’t even question it.  And most perplexing…why does the dog have a radio bud in his right ear?  Is he like some sort of secret agent?  A dog…uh…secret agent?  Is he going to be voiced by George Clooney in the movie version of this shirt?  What a stupid fucking question, of course he is.

This dog has a name, it’s written in little white letters underneath his chest tattoo.  His name is Fluke.  As in “this is a Fluke of nature.”  As in “Oh mother of God, this should not exist.”  Look into its eyes.  As strange as everything else is about the picture, the eyes will haunt you forever.

You can see a human soul inside there, screaming to get out.  Also, one of the reviews for this shirt says, “My dog Sparky is a white pit and looks exactly like this dog.”  That’s terrible.  Why the hell would you tattoo your dog?  You’re a monster.

Putting an animal in people’s clothing can either make them look terrifying (the gun toting Doberman, for example) or laughably tamed (like this bear fishing).  We can only imagine that this shirt’s designer brings out this shirt every time he has friends come over to visit, and we are sure that he is insufferable.  “No, but get it, you guys?” he’ll say to people who have clearly stopped listening and are only over at his place to score some free booze, “It’s like, bears fish in nature!  They eat fish!  But this one’s got people things to go fishing!  His hat says ‘Born to Fish’ and I almost didn’t put that there, but I think it really completes the whole image.”  But his friends have already robbed him and ran out of the apartment.  He’s never going to see them again.

We’re just going to put these next three shirts back-to-back-to-back and give you a moment to really appreciate them. 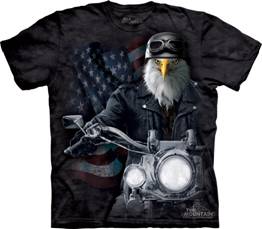 Holy shit these are incredible.  This has everything you could ever look for in apparel.  An American Flag softly waving in the background?  Check.  Our national bird looking badass in a leather jacket?  Check.  Animals adhering to standard safety requirements for motorcycle riding?  …Actually, surprisingly, yes, yes that too.  And look at that big on the far right.  Was there a reason why they decided to give this pig a giant ZZ Top beard?  We’re pretty sure if you asked that question to anyone associated with the company their response would just be shouted flavors of Sparks alcoholic energy drinks. 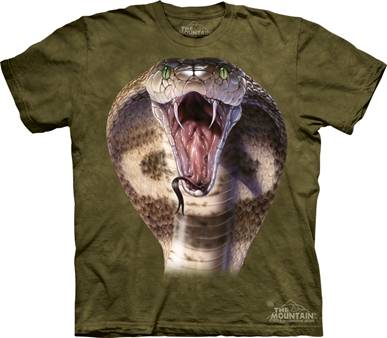 This elephant is so getting laid tonight.  The obese person underneath the shirt, though?  Not so much.  We think if you tried to order this shirt as a size “medium” the company would fly over a fat man to sit on your face as punishment for being so presumptive.  We never knew it before this very instant, but we want to buy an army of elephants and teach them how to make rock music.  We could get six of them and call them The Elephant Six and trick a whole slew of hipsters.  They’d be really pissed off at first when they realize they’ve been tricked…but then they’d realize, holy shit, a band of elephants.  And you know they’d be down with drinking PBR because elephants are horrible alcoholics.  That’s not even a joke, that’s science.

Can you believe that there are people who refuse to admit that America is the greatest country in the world?  They steadfast refuse to admit it, despite the fact that images like that were dreamed up in America and put on a goddamn shirt.  If you’re wearing this, and are 11 years old, you probably shouldn’t be reading this article (because of the fucking language) but goddamn son you are absolutely the coolest kid in your school.  And if you’re wearing this, and are 41 years old, maybe try getting a dog instead if you want to attract women, because surprisingly enough, this isn’t going to be that effective for that purpose.

This is probably the only shirt in the entire series that is made for thin people to wear.  Fair warning though, if you buy this shirt, and you’re not in college, there’s a very real chance that you’re being portrayed by James Franco in a motion picture.  Quick, check your face, is there a thin sketchy circle beard there?  Yes?  Is your hair sort of stringy right now?  Are you squinting more than you normally do?  Yeah, you’re probably James Franco.

We’re gonna have to call it right here.  There is no topping this.  An eagle…fighter pilot…American flag…this is literally overloading our senses.  This shirt should only come in sizes large enough to engulf the entire state of Kentucky, and everyone should buy one.  Our only concern about this shirt is that it is so badass and so American that there is no way that this eagle is not sentient, and it will start fighting back when the first person who doesn’t use deodorant tries to put it on, which is redundant to say because if you are buying this shirt of course you never wear deodorant.  This shirt is so intense that when our staff first saw it we blacked out, and when we woke up we had each eaten a double McRib Sandwiches, and they don’t even make those during this time of the year.  If an Air Force pilot put on this shirt literally turn into an F-18 jet.  This shirt is powerful enough to make people into Transformers, for God’s sake.

God bless you, The Mountain.  You crazy sons of bitches have done it again.

Leave a Reply to The Mountain Cancel reply