Hey, You Guys Hear About That Charlie Sheen Guy? We Know, Crazy, Right?

AFFotD tries its best to stay topical.  We addressed the world to the dangers of blizzards just as the Midwest and the East Coast were being buried in ten foot snow drifts, while at the same time introducing the newest trendy bar beverage (Hot Bo-Co) that, we swear, is like two weeks from taking off.  We re-introduced the world to Teddy Roosevelt because he’s always relevant.  We talked about chewing gum, which is good for after you drink to the point of puking.  But today, AFFotD is going to try to go really recent, and rehash the conversations you had with all your coworkers yesterday.  That’s right, we’re going to celebrate the unique brand of American insanity that can only be seen in certain American celebrities.  And not just any celebrity, today AFFotD celebrates and documents the deconstruction of a man so thoroughly nuts he may go down as the craziest man in the history of Hollywood.  And we couldn’t be any prouder of him.  Take a bow, Charlie Sheen. 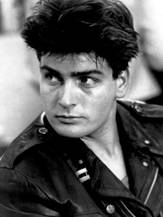 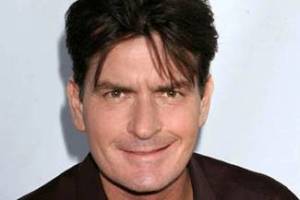 There’s no need to chronicle the life and career of Charlie “Oh yeah, he did a couple good comedies in the 1990’s and then he started doing that shitty show” Sheen.  In fact, after his peak (Major League II/Hotshots) Sheen’s been seeing his America stock oscillate, but fall steadily.  He married the naked chick from Wild Things, but wasn’t able to hold onto her, and he diluted all American respect we can afford the man’s career by doing eight years of truly awful slop for Two and a Half Men, somehow becoming the highest paid actor on television, something so offensive to us that Kiefer Sutherland almost quit the AFFotD staff out of protest.  Because seriously, fuck that show.

And yet the very same people who are watching this are insisting that waterboarding is torture.

While we cannot say that Charlie Sheen and his “Holy shit, you can tell where they tried to airbrush away the crazy in the above picture” career distinguishes him to be a true American, we can at least relish in America’s ability to create such a glorious example of insanity, vanity, and, just, like so many drugs, you guys.  A man who his both crazier and less qualified to run a youth hockey league team than his brother, Emilio Estevez, yet is somehow far more rich and famous.

So let’s go through the fame, fortune, drugs, and crazy that is Charlie Sheen, an insane abomination America molded so the rest of us could all have a nice laugh at the man’s expense.

Warning:  If you are pregnant, nursing, have a heart condition, are allergic to penicillin, or once had a really bad LSD trip that you sometimes still have nightmares about, you may want to do yourself a favor and skip to the picture of the puppies at the end of this article.  Go ahead, we won’t hold it against you.

So here is the sordid tale of Charlie Sheen, the male equivalent of a crazy cat lady, if by “cat” we meant to say “drugs,” in list form.  As we usually have to stipulate with things this insane, all of this information is real.

1984- A 19-year-old Charlie Sheen knocks up his girlfriend. Buckle up folks, it’s gonna be a ride.

1990- Charlie Sheen accidentally shoots his then-fiancé, Kelly Preston, in the arm.  For some reason, Preston views this as a good reason to break up with him, and she goes to her previously platonic friend, John Travolta, and becomes his beard marries him.  Holy shit, we’re still 20 years away from present, and we’re already at “accidentally shooting your hot fiance” territory.

1991- Sheen receives a VHS of a Japanese film called Guinea Pig, which literally only consists of two Japanese men kidnapping a woman and torturing/murdering her on screen.  It was rumored to be an actual snuff film (don’t worry, there’s a whole “making of” section that proves that it was just…terrifying special effects), and Charlie Sheen sent the tape to the FBI, figuring that, “Snuff film possession” was something he probably shouldn’t have added to his résumé.

1995- Sheen married model (ha, sure, “model”) Donna Peele, before that same year testifying at a brothel trial, where he admitted to spending $50,000 on 27 different $2,500 a night prostitute.  Simple mathematics inform us that the only way he could have pulled this off was to “split the bill” between multiple prostitutes on at least 7 different occasions.  Holy shit, you guys.

1996- Arrested for assaulting a woman in his home.

1997- Arrested for misdemeanor battery against his girlfriend, Brittany Ashland.

1998- Charlie Sheen injects himself with cocaine, suffering an overdose.  At this point, he’s already accidentally shot someone, and suffered an OD.  Combine that with his connection with John Travolta, and we’re pretty sure Sheen’s just been spending his life living out the plot of Pulp Fiction.

2006- Denise Richards decides that Charlie Sheen is no longer allowed to see her naked unless he wants to buy the blu-ray version of Wild Things, and files divorce, stating that he abuses drugs and threatened her with violence.

2009- Charlie Sheen is arrested when he is accused by wife number three of domestic violence.  This is where shit gets real.

2010- Sheen enters rehab, signs a $2 million per-episode contract for That Shitty Show He Does,  He then is kicked out of his hotel for causing $7000 in damage while under the influence of just so much cocaine and booze.  This is also the year where he releases an fake interview with himself urging President Obama to investigate the fact that 9/11 was an inside job.  Lovely.

And now we come to 2011, which can just be summed up with a series of the bizarre and epic quotations he’s been spewing forth in the past few weeks.  Here’s where the real fun begins.  Especially when Sheen goes on record about his (supposedly) new sobriety, his demand for a 50% pay raise for Two and a Half Men and the fact that, as his third divorce is going through, he has two women he calls, “The Goddesses,” who are 23 and 24 years old, who he currently has a very public sexual relationship with.  Which is impressive as hell, except that when you hear that, and when you see what they look like, it’s sort of like ordering a porterhouse steak and getting a flank steak.  Yeah, it’s still good, but…you thought it’d be better.  To wit. 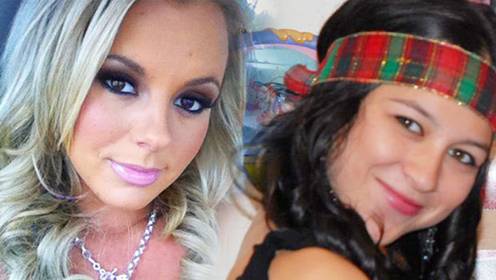 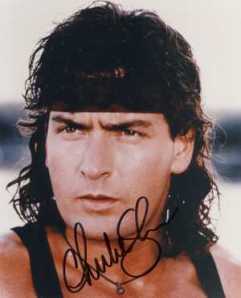 AFFotD’s take: Damn, another good one, but tell us that in five years when you’re in the tail end of your “Elvis” phase. 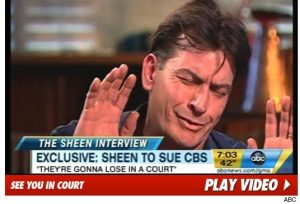 AFFotD’s take: Tiger blood?  Brains firing in extraterrestrial ways?  We’re not saying Charlie Sheen is well on his way to establishing a cult, but would that really surprise you at this point?  Half of you sort of assumed he already had, didn’t you?

AFFotD’s take: Hell, we haven’t heard such epic bragging tales about coke use since Spicer Breeden.  Also, you know Sheen’s reached an impressive stage of crazy when he starts this sentence, “I was banging seven…” and there were at least five directions you could have seen that sentence going without making you blink.

AFFotD’s take: Did you know that the 1990’s one-hit-wonders, Chumbawamba, chose their name by having their drummer randomly type letters on a typewriter?  We bring this up because this sentence looks like the guy on coke at your party just spent fifteen minutes organizing the magnetic poetry words on your fridge, and this was the end result.

AFFotD’s take: You know who else was a polygamist with multiple live-at-home lovers, and probably used the term “Goddesses” to describe them?  Calligula. 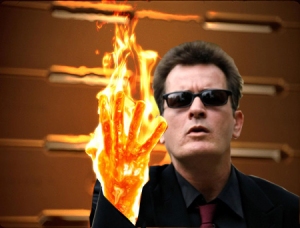 AFFotD’s take: Actually, also something that would not have been out of place if said by Caligula. 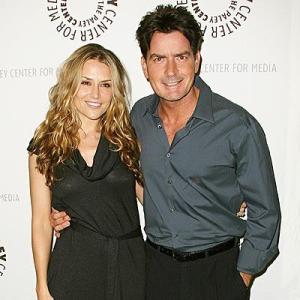 AFFotD’s take: Brooke, of course, is his third wife, who apparently did not want to continue living out Charlie Sheen’s “Dream existence ever since he sprung for HBO and started watching Big Love.”  What does rhyme with winning?  Sinning?  Pinning?  Uh…Spinning?  You don’t answer the question, Charlie!  “Us” does not rhyme with “winning” at all! Goddamn you, Charlie Sheen, what drugs are you on!?

AFFotD’s take: Ah yes, that’ll do it.  Haha, we actually kind of like that.  If we could find somewhere to score some Charlie Sheen, we’d totally take a hit of it, and post the trip on youtube just to prove him wrong.

AFFotD’s take: We can’t actually fault Sheen for this one.  Our lives are perfect, and we spend just about every second winning (except for when we purposely lose in a game of pickup basketball to a young, endearing child with a learning disorder, so we can win the affections of their surprisingly perky and attractive mother).  Having to hide that pure unadulterated awesomeness can be a burden, we get that.  But you don’t see us bragging about it.  Well, except for that last bit we just said.  The only thing we’re addicted to is winning. 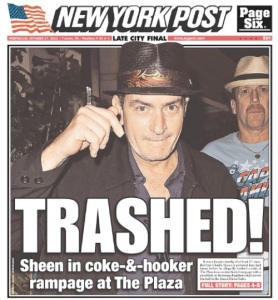 AFFotD’s take: There’s just so much crazy going on here, we don’t know where to start.  This sounds like something we’d say to get out of an intervention.  There’s just…so much going on here.   We…this is starting to hurt our brains.

AFFotD’s take: Charlie Sheen keeps bragging about his damn tiger blood, but we’d be more impressed if he used tiger blood to cut his cocaine.  That feels more American than us.  And we were unaware that doctors had pinpointed the DNA traits of Adonis.  Then again, we’re just Americans, we don’t know science.  We’ll take Sheen’s word on that.

AFFotD’s take: Does every entertainer who is successful tailoring to the lowest common denominator?  We don’t know, but you don’t hear stories Carrot Top doing blow off a stripper’s ass.  Which is unfortunate, because we’d imagine that would be funnier than his act.  We don’t even have an issue with him insulting his target audience and calling them poor and stupid, really if they like Two and a Half Men, they deserve it.

And really, this whole situation is not only America, but it is the best of America.  Just like how we all pause our ipods when a crazy homeless person begins rambling loudly on the train, we love listening to insane people because the best stories in America begin with, “So this one crazy dude…”  And so, we urge Charlie Sheen to keep doing interviews, keep driving away PR representatives, and just keep on entertaining us with his batshittery.  Also, if he keeps it up, they’ll cancel Two and a Half Men, so…you know…win-win. 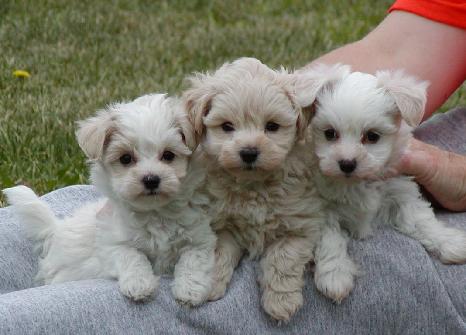 2 responses to “Hey, You Guys Hear About That Charlie Sheen Guy? We Know, Crazy, Right?”