“The link between sugar and cavities have never been truly confirmed.  I say, let your dentist worry about it.”

One of the least controversial statements an American can make is, “Carnivals are fucking awesome.”  Be it a state fair, a traveling amusement park, or a Cruise line where many passengers get gastronomical illnesses, carnivals encompass everything American, from the games of chance meant to scam hardworking marks to the impressively unhealthy food inventions that they spawn.

Carnival food in particular has become a bit of a cultural phenomenon in recent years, coinciding with the increasingly “Foodie” culture that many white people Americans have embraced.  After the breakdown of the “health food” movement, Americans correctly realized that they had wasted a good portion of the late 90’s eating things like “soy beans” and “wheatgrass” and other strange foods that come in unnatural colors like “green” and “brown.”  So Americans everywhere flocked to carnivals to revel in what carnivals do best: shortsighted innovation! 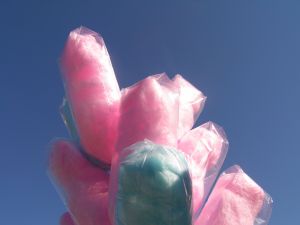 “So how about we take sugar, add some food coloring, spin it until it’s fluffy, and then stuff it in a bag a small child’s head can and will fit in?”

As Americans, it’s our duty to go out of our way to find food that will wage war against our small intestines.  And Carnivals, state fairs, and outdoor festivals give Americans the best opportunity to ingest their yearly calorie intake in just a few minutes.  And goddamn it if that doesn’t sound American as hell to us.  Here are the most American foods you’ll every pay a Carnie to put in your mouth.