“What the hell am I looking at?” 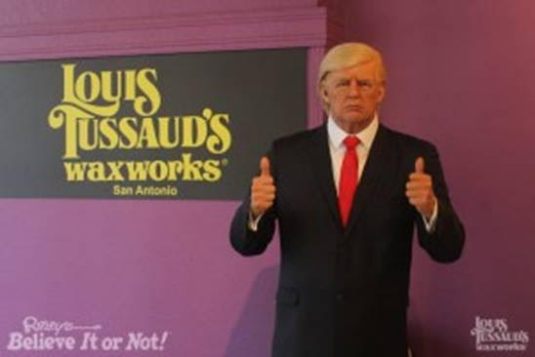 Just about everyone has at least heard of Madame Tussauds—it’s pretty much the gold standard for wax sculptor museums in the world. The original location in London opened in 1835, but dozens of satellite museums have sprung up all over the world during the 180 years of its existence. Now just because something is famous doesn’t mean it’s “necessary.” If we’re being completely honest, wax sculpture museums are very creepy and uncanny valley even at their best.

Which brings us to Louis Tussaud, Marie Tussad’s great-grandson who took up the family business and…well, his legacy is less than exciting. The Louis Tussaud’s Waxwork Museum located in Grand Yarmouth, for example, was called the “world’s worst waxwork museum” before it closed in 2012. His other locations aren’t that much better.

So, um, strap in we guess, because we looked through some of the offerings of the Niagara Falls location of Louis Tussaud’s Waxworks, and what we found…well it’s not great. It’s very not great.

First, let’s take a little look at the history of the only wax sculpture family that is (sort of) a household name. Marie Tussaud was born in France (boooo) in 1761, and as a six year old girl was taken under the wing of Dr. Philippe Curtis, her mother’s boss and a physician skilled in the art of wax modeling.

She spent her childhood learning under the doctor, eventually creating her first wax sculpture (of Voltaire) in 1777 at the age of 16. She began her own career making sculptures before being sentenced to death during the French Revolution due to the belief that she was a royal sympathizer.

She was eventually spared by Jean-Marie Collot d’Herbois, who was a fan of her work, and also killing people, as he was responsible for over 2,000 executions during the Revolution. But Tussaud survived, and continued to work in the medium of wax until the death of Dr. Curtis in 1794, who left her his entire collection of wax works.

Tussaud visited London in 1802, but found herself unable to return to her native France due the Napoleonic Wars. She traveled through the British Isles to display her collection of wax statues to get by, and after 33 years she finally established her own permanent exhibition on Baker Street.

As it still is in business today, it clearly did well for itself. When Madame Tussaud retired, she passed her…whatever you use to sculpt wax (knife? Chisel? Blowtorch?) on to her son Francis, who became the chief artist of the Exhibition. Francis was then succeeded by his son Joseph, whose trained his sons John and Louis in the family business. When it was time for Joseph to step down, he chose his son John Theodore Tussaud, resulting in poor Louis leaving the family business to start his own waxwork museum in 1890.

So yeah, we’re here to talk about the museum run by the guy who wasn’t good enough to stay in his family business, but decided to set off on his own and try anyway. Louis Tussaud’s wax museums are now owned by Ripley Entertainment, and while they all are uniquely…off-putting, none really hold a candle to the “what the fuck” emanating from Niagara Falls. Because as weird as a good wax statue looks, a truly bad wax statue can haunt your nightmares.

So happy haunting. Here are some bad wax statues.

But it also looks like a 48-year-old grocery store manager getting ready for a court date that’s going to end with him losing partial custody of his kids. He looks like a guy who has more cats than friends.  This is the look of a guy who eats at Subway so much the staff has memorized his go-to order. We’re going to assume that the artist knew what they were doing, but that the museum itself made the mistake by asking for “Fat, Sad Leonardo DiCaprio.” That’s the only explanation for this.

We don’t know much (at all) about the processes involved in wax sculpting, but if it’s anything like how they make the sex robots in Westworld, we’re going to go ahead and assume that they built up the skeleton on this Michael Jackson wax figure and are just waiting to add the skin later, possibly while a sad piano rendition of “Creep” by Radiohead plays in the background.

Honestly, thank God they gave the Queen Bee a name tag, because there’s no way in hell anyone would be able to put two and two together on this one without it. You could tell us that this is a statue of “Rachel, you know, Rachel, from marketing? She’s been with the company, oh, a year and a half now? You know. Rachel” and we’d 100% believe you.

Oh sweet God why are there so many folds? A face shouldn’t have that many folds? This frankly seems like it’s racist or something somehow, but we’re not sure what stereotypes are supposed to be at play here besides the “bad British teeth” which might be the only part of this statue that actually is pretty close to the character in the film series. This looks like it was made by a 1930s German propagandist who traveled to the future to mistakenly believe that Mike Meyers is Jewish. How can every single part of a person’s face be so big?

This is a slightly less realistic representation of Angelina Jolie than her performance in the film Beowulf. Keep in  mind, in Beowulf she was also a CGI-rendered monster with a crazy-ass tale, so that’s the baseline we’re going off of here. We’re honestly not sure if this is actually a wax statue, because we’d totally buy “a custom Real Doll made by a mid-tier sex doll manufacture” as a plausible explanation of what we’re looking at here. 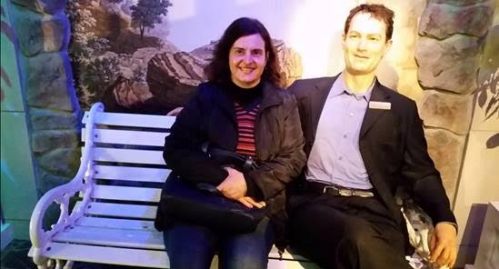 …Forrest fucking Gump? Are you serious?

Anyway, the important lesson to learn here is…Louis Tussaud’s miiiight not be the best place to go for your wax modeling needs. Yikes.