“There is nothing more important to me than defending the honor of ALDI, I am not a corporate shill”

~Apparently half of the goddamn internet 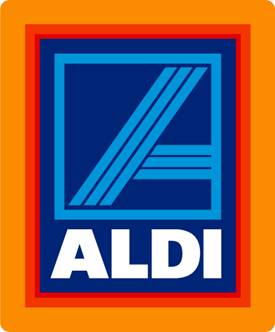 Nearly six years ago, we wrote an article called “ALDI Owns Trader Joe’s, Corners The Market On Cheap Food Knockoffs.” Not to get too “how the sausage is made” on you, but the entire reason we wrote it was that one of our staffers was at an ALDI with their roommate, and made a crack about the ALDI brand of Ramen Noodles along the lines of “oh, you want TOP Ramen? Well lah dee dah Mr. Rockefeller.”

The article gives a brief history of the company, makes jokes about all the cost-cutting corners ALDI does, pokes fun at their store brands, and closes with a joke about how people who have jobs don’t shop there, and that their produce is low quality but cheap.

So much so that a year and a half ago, we had to write another article about ALDI to clarify our position, because people were digging up this random article and posting the most pissed off comments imaginable there.

Seriously, we wrote an article that was jokingly like “ALDI is bullshit” and ALDI shoppers reacted as if their loved ones had just told them they don’t actually like missionary position and they should switch things up a bit.

Now, as our follow up article points out—ALDI is fucking fine, if you shop there, you do you, but ALDI literally does nothing that warrants the level of corporate shilling that you motherfuckers give it. If ALDI shoppers got together and formed a club, their motto would be “Well, Actually…”

We barely have the energy to throw away our empty whiskey bottles when we wake up in the morning, yet scores of grocery shoppers are looking up obscure articles about ALDI, finding the two paragraphs that talk shit, and posting long (LONG) comments that are like “I actually make good money, but I still go to ALDI, here is the exact percentage in savings I have, and let me name various brands and products that ALDI offers that I enjoy.” No one gives a shit, Gladice.

You guys, they won’t go away. They stalk us to this very day.

So fuck it. We’ll lean into the skid. Come at us ALDI lovers, you’re about to get a dose of hate. 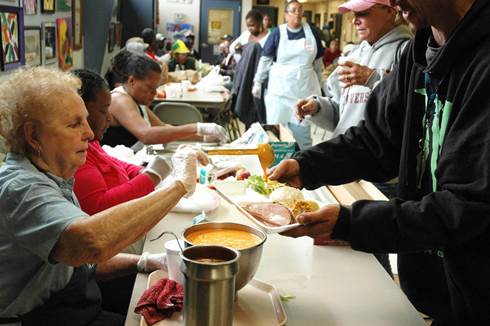 ALDI is bullshit, and you’re bullshit for being mad at that sentence.  We’ll say, in a paragraph that every single one of you navel-gazing grocery store fuckers will ignore as you fixate on every one-off statement that pisses you off more than that time that your husband blamed his browser history on your teenage son, that ALDI is actually a very well put together (foreign) (corporate as FUCK) grocery store.

About 90% of the stuff there is at least “fine” and is half the price of stuff that usually is “just as fine” or “only marginally better.” Their household items like ziplock bags and laundry detergent are so much cheaper than anywhere else that we’re pretty sure they’re made of corpses or some shit, but they work just fine. People that shop there tend to save a lot of money, which we’re guessing they use to buy uppers as they live the life of a clichéd overworked suburban mother, but we’re not your fucking financial advisers you do what you want with that extra scratch.

That said? Fuck ALDI and everyone who loves it.

First of all, let’s look at a few comments from you, the reader.

There were multiple people who responded to our badmouthing of ALDI by coming to the entirely reasonable assumption that, clearly, we’re a hatchet job being paid by Walmart or Whole Foods to “take down” the competition.

Fuck, you found us out!

The website that’s been publishing for six years and has published over 700 articles, most of which are between 2,000 and 6,000 words, is obviously being paid off by the shady cabal of grocery store chains hell bent on destroying ALDI’s sterling reputation. Our (including this one) three articles badmouthing ALDI earned us millions of dollars which we funneled into our site by not even opting to pay for a layout that costs money.  HOW DID YOU FIND US OUT!?

There are some ALDI shoppers who have the right mindset about their store.  They save money there, they like it well enough, and then when they’re not shopping, they’re not talking about ALDI, because they have lives and friendships and interests that don’t include motherfucking Millville products.

Then there are people like motherfucking Steve who read a joke saying “ALDI is where Walmart shoppers go when they can’t adhere to the dress code” and respond by saying we are crafting “lies and propaganda” and that ALDI should sue us.

There’s a very simple way to tell which type you are.  If you read this article, and think anything from “heh, pretty funny” to “this is a dumb” and didn’t feel the overwhelming urge to post a comment fact checking this willfully ignorant and unresearched article, you’re the first type.  If you’re trying to decide what fake email address you should put down for your response, you’re the latter.

Jesus fucking Christ, .R Meyers, no one cares, this is why you have like, 5 friends who don’t even think about you enough to talk shit behind your back.

ALDI is bullshit, Millville is bullshit, the whole store is a fucking cult experience that you have to “figure out” (seriously, there are websites that indoctrinate you to what to expect with your shopping).

You stick a fucking quarter in your shopping cart to use it (“mer mer mer that’s so they don’t have to pay people to put the carts back” SHUT THE FUCK UP), pay for your bags, use a debit card, and fill up your fucking “but you get the quarter back!” cart with vegetables that look like they grew in a dark room where German farmers whispered “I am the sun” to them as their sole source of light. 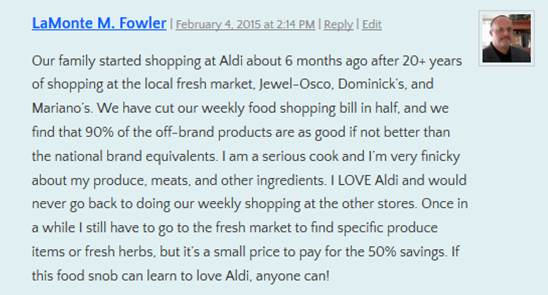 Fuck off, LaMonte. Even worse than the people who say “I’m not poor, but that doesn’t disqualify me from SAVINGS” are the people who say “I actually have a refined palate, and I think that ALDI produce is just as good as what my local grocer supplies, tomatoes are supposed to be orange right?”

That line of “I’m a gourmet cook” (no you’re not) “and I actually buy everything from ALDI” (no you don’t) is a common thread among the type of people who look up articles on ALDI in their spare time. And it’s 100% bullshit.

Everyone who cooks at home and knows how to use a stove claims to be a goddamn gourmet chef, but you ain’t all that. You make chicken soup from scratch? Great, so does everyone, and it’s delicious every time, no one is impressed.

Anyway, we digress. Back to ALDI being for poor people and uptight suburbanites with no sense of humor or self-reflection.

We were talking to someone about ALDI, who made the point that it is like church.  When you go in fresh, you have no idea how things work. There are all these processes and rituals. But then, if you decide it’s for you, you go all in, and all of a sudden you won’t shut the fuck up about it.

And you know what? No one likes that person. “Oh great, here’s Samantha, she recently got way into the Mormon church, every conversation we have is awful and awkward now.” ALDI is the reason people stopped inviting you to dinner parties, Michael. 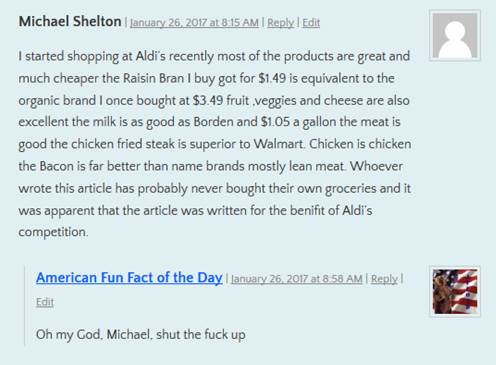 Here are some 100% lies about ALDI that we just made up but that we think sound funny to associate with the store.

All ALDI generic products are actually name brand products that were stolen off a delivery truck somewhere in Jersey. ALDI milk comes from pigs, who actually produce very delicious milk.

The president of ALDI is just a menacing silhouette on a chair whose face is constantly obscured by shadow. Everyone who has had a conversation about how great ALDI is that’s lasted more than three sentences isn’t allowed in heaven.

You’re not allowed to walk into ALDI without showing that your household income is below the poverty line.

Here are some true things about ALDI that are still funny to associate with the store. 75% of their clientele are either poor or aggressively self-important. Their American cheese is the worst tasting thing they sell, with their five hour energy knockoff product coming in at a close second.

The layout of their store just feels…depressing.  Like it’s depressing to shop there. It is our uninformed opinion that this is intentional, because it makes you want to get in and out of the store as fast as possible, which feels like something ALDI would actually do.

And, finally, everyone who has had a conversation about how great ALDI is that’s lasted more than three sentences aren’t allowed in heaven. These are all indisputable facts, except for the opinion we threw in there.

So to those of you who can read an article badmouthing ALDI without personally feeling like you are being insulted—good.  You have a level head on your shoulders, and honestly our website is probably a tad beneath you, unless you like dick jokes and snarkiness, in which case, hey there good looking, wanna grab a drink some time?

But if you read this and feel compelled to tell us the actual quality of their produce, or the EXACT low, low prices of whatever the fuck you ate for lunch today, take a moment, step back, and ask…is this really worth your time?

And then post a comment anyway, because you’ll step in line with your fucking ALDI overlords to defend your favorite fucking place in the world, you goddamn lemming with no self-awareness.

This post not sponsored by the Walton brothers, but if they wanted to pay us for it, we’ll gladly take their money. And then write about how Walmart sucks too. And Whole Food sucks too.

But this isn’t about grocery stores that suck, it’s about ALDI being a bullshit store for poors.

This entry was posted in America Fun Fact of the Day, America's Culinary Treats, Strange America, The Rest of Them and tagged ALDI, America, Germany, Haters, Millville. Bookmark the permalink.